Dershowitz Is Wrong — Abuse of Power Is Grounds for Impeachment 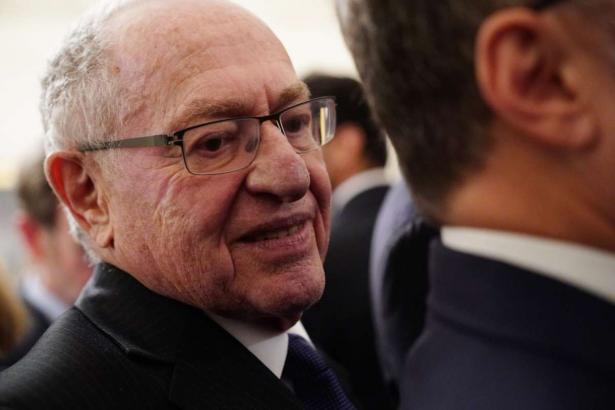 Alan Dershowitz, impeachment defense lawyer for President Trump, claims that abuse of power is not an impeachable offense. But this flies in the face of constitutional law., Mandel Ngan / AFP via Getty Images // Truthout

Alan Dershowitz, the Harvard emeritus law professor who is serving as a hired gun for Team Trump, is arguing that even if John Bolton testifies that Trump admitted the quid pro quo with Ukraine to him, the Senate could not remove the president from office. Dershowitz has gone so far as to say that even if Trump told Bolton he was withholding the congressionally authorized military aid to Ukraine until it helped him with an investigation of the Bidens, that is still not impeachable conduct.

Contrary to the overwhelming weight of scholarly legal thought, Dershowitz has claimed that “high crimes and misdemeanors” is limited to offenses prohibited by statute. He told senators that abuse of power and obstruction of Congress, for which Trump was impeached, are not grounds for impeachment.

Dershowitz used to take the opposite position. During the Clinton impeachment, Dershowitz said no technical crime was required for impeachment, and abuse of trust could be an impeachable offense. “I didn’t research it” before, he admitted, but now thinks that “criminal type-acts” are necessary.

Posing a “hypothetical case” before the Senate on January 27, Dershowitz asked senators to assume a Democratic president told Israel he would withhold congressionally authorized foreign aid or an Oval Office meeting unless it stopped building settlements. That would not be an abuse of power, Dershowitz stated, even though he himself “might disapprove of such a quid quo pro demand on policy grounds.” What Dershowitz’s hypothetical president should really do is ask Congress to reverse the aid authorization because Israel’s settlement building violates the Fourth Geneva Convention, which is part of U.S. law.

Abuse of Power Is Not Trump’s Only Impeachable Offense

House Speaker Nancy Pelosi made a political decision to limit the impeachment of Trump to the Ukraine scandal, and the House of Representatives accordingly impeached him for abuse of power and obstruction of Congress. But there are many other possible grounds for impeaching Trump, including the obstruction of justice documented in the Mueller report, violation of the Emoluments Clause, the war crime of assassinating Qassim Suleimani, and the withdrawal from the Paris climate accord.

Given Dershowitz’s loyal defense of Trump in various arenas, it is no surprise that he disagrees with political historian Allan Lichtman on the question of whether Trump’s climate change policy is a crime against humanity and an impeachable offense. (I have also laid out the legal case for why Trump’s withdrawal from the Paris climate agreement constituted a crime against humanity.)

It was the danger that a president would abuse his power that most concerned the framers. Thus, they provided for impeachment in the Constitution.

It was the danger that a president would abuse his power that most concerned the framers. Thus, they provided for impeachment in the Constitution.

“High crimes and misdemeanors” include, but aren’t limited to, conduct that the criminal law punishes. Impeachable offenses are political, Alexander Hamilton wrote in Federalist No. 65. They “proceed from the misconduct of public men, or, in other words, from the abuse or violation of some public trust. They are of a nature which may with peculiar propriety be denominated POLITICAL, as they relate chiefly to injuries done immediately to the society itself.”

Impeachable offenses are not confined to acts prohibited by criminal law. “Unlike a criminal case,” the 1974 House Judiciary Committee report for the Nixon impeachment says, “the cause for the removal of a President may be based on his entire course of conduct in office. In particular situations, it may be a course of conduct more than individual acts that has a tendency to subvert constitutional government.”

“The argument that only criminal offenses are impeachable has died a thousand deaths in the writings of all the experts on the subject, but it staggers on like a vengeful zombie,” Harvard law professor Laurence Tribe argued in The Washington Post. “In fact, there is no evidence that the phrase ‘high Crimes and Misdemeanors’ was understood in the 1780s to mean indictable crimes.”

Tribe wrote that Dershowitz’s “suggestion that, even if some noncriminal offenses might be impeachable, ‘abuse of power’ is not among them is particularly strange.” He added: “No serious constitutional scholar has ever agreed with it. The suggestion turns the impeachment power on its head.” Indeed, it was the danger that a president would abuse his power that most concerned the framers. Thus, they provided for impeachment in the Constitution.

“I really thought Dershowitz disgraced himself,” Sen. Jeff Merkley (D-Oregon) told CNN’s Dana Bash. Dershowitz “said essentially even if a President commands the power of state to corrupt a future election, by seeking the intervention of a foreign power, that that’s not something that impeachment would be appropriate for,” Merkley added. “It’s exactly the type of foreign interference that the founders talked about.”

“What Dershowitz did yesterday was stand up and be a guy with Harvard attached to his name and spout complete nonsense that’s totally unsupported by any scholarship, anywhere.”

All four constitutional scholars called to testify in the House impeachment inquiry, including Trump’s own expert, George Washington University law professor Jonathan Turley, agreed that impeachment does not require a crime and that abuse of power is an impeachable offense.

Harvard law professor Noah Feldman testified, “The framers provided for impeachment of the president because they feared that a president might abuse power of the office to gain personal advantage; to corrupt the electoral process and keep himself in office; or to subvert our national security.”

Pamela Karlan, a Stanford law professor, testified that “drawing a foreign government into our election process is an especially serious abuse of power because it undermines democracy itself.”

Offenses supporting impeachment “are not neatly delineated but depend on context and gravity,” University of North Carolina law professor Michael Gerhardt testified. He stressed the political nature of impeachable crimes.

“There needs to be clear and unequivocal proof of a quid pro quo,” Turley said, but “the current record does not establish a quid pro quo.” Perhaps Bolton’s testimony would convince Turley.

Frank O. Bowman, a law professor at the University of Missouri and author of the book High Crimes and Misdemeanors, said Dershowitz is bucking the weight of legal thought. “In making this argument, Alan is essentially alone, and I mean alone,” Bowman said. “What Dershowitz did yesterday was stand up and be a guy with Harvard attached to his name and spout complete nonsense that’s totally unsupported by any scholarship, anywhere.”

Dershowitz’s unfounded theory should not provide political cover for GOP senators who oppose hearing witness testimony, a staple in all prior impeachment trials and indeed, in any fair trial. They fear that Bolton will nail Trump to the wall. And that’s the last thing the “Vichy Republicans” want.

[Marjorie Cohn is professor emerita at Thomas Jefferson School of Law, former president of the National Lawyers Guild, deputy secretary general of the International Association of Democratic Lawyers and a member of the advisory board of Veterans for Peace. Her most recent book is Drones and Targeted Killing: Legal, Moral, and Geopolitical Issues.]

PART OF THE SERIES - Human Rights and Global Wrongs