The exhibition “Rendering Witness: Holocaust-Era Art as Testimony” demonstrates the power of art. The artists may have been silenced in the homicide of the Nazi 's final solution, but their clandestine art work survives as an outspoken memory. 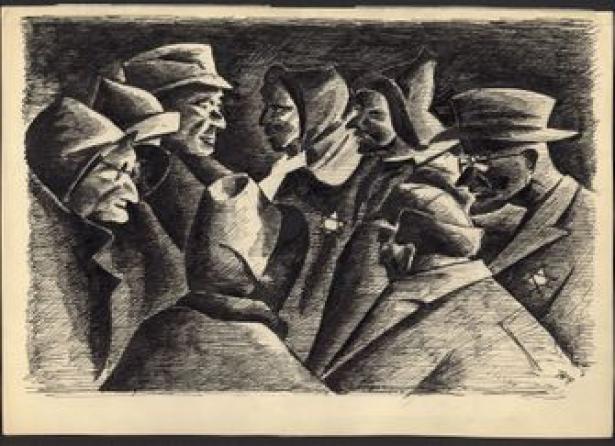 Eight Men in Coats With Stars: A 1944 drawing by Peter Lowenstein, perhaps after he had learned of his impending deportation to Auschwitz., Museum of Jewish Heritage // The Forward

What are we looking at when we look at drawings?

The art critic John Berger said that drawing was like discovery. “Each mark you make on paper is a stepping stone from which you proceed to the next, until you have crossed your subject as though it were a river.” In other words, drawing is a close reading of reality – external or internal, present or remembered.

I was thinking of this when I went to see “Rendering Witness: Holocaust-Era Art as Testimony” at the Museum of Jewish Heritage, a show of 21 small works most of which are drawings, and most of which were made by Jews imprisoned by the Nazis – either during their imprisonment, or shortly after liberation. I asked the exhibit’s curator, Michael Morris, what made him decide to put together an art show in the context of a history museum. He said that art reveals history differently from other artifacts. Most photographs of the Holocaust were made by Nazis and their collaborators, reducing the prisoners to a collective. In conveying the perspectives of individual survivors, the drawings reassert their humanity.

Offering a platform solely to survivors and excluding artifacts made by the perpetrators certainly seems like a righteous curatorial move, and here, it has resulted in a small yet powerful show. The drawings, most made clandestinely, vary in quality, style and intent. Some are made by professional artists, some by self-taught ones, and two are made by a child. But all of them certainly transcend documentation, conveying a remarkable diversity of artistic voices.

Of all the artists in the show, Alfred Kantor seems most concerned with remembering and reporting. Kantor studied advertising art in Prague before he was deported to Terezin, and later, to Auschwitz. Although he continued making work during his imprisonment, Kantor destroyed most of it. Then, in 1945, while living in Deggendorf Displaced Person’s Camp, he began to draw again, meticulously detailing his wartime experience. Three of his drawings of Auschwitz are displayed here. They are physically tiny, but they’re crammed with visual information and captioned in two languages. “The drawings came rapidly but the captions were a problem.” Kantor said in 1971. “I started to write them in my native Czech, but then realized that few people would understand them in America, where I would be living in a matter of months.” Typewritten English translations are pasted into the drawings beneath the handwritten Czech captions, paper layers physically representing seemingly irreconcilable parts of the artist’s life.

“Irreconcilable” is also a word that came to mind when I was looking at the drawings of Peter Loewenstein. “Railroad Connection Terezin-Bohusovice,” a washy watercolor streetscape, and “Eight Men in Coats with Stars,” a dark, scratchy ink drawing, look as if they were made by two different artists. An engineering student from Prague, Loewenstein made drawings for Terezin’s technical department, which gave him access to art supplies. Unlike Kantor, Lowenstein died in Auschwitz, and his drawings must speak for themselves. Was the pretty watercolor of the railroad a job assignment? Or did the artist know that the railroad connection had been built to accelerate deportations, and chose the soft painterly style to create a sense of foreboding by contrast? There is no such ambiguity in the frankly expressionist “Eight Men in Coats with Stars.” The men huddle together in conversation. This is a night scene, and the figures appear to be lit by street lamp – their angular faces are shadowed, with only a few details sharply articulated by the light. The darkness is built of dense cross-hatching strokes that seem to vibrate with urgency and tension: it’s clear that these people have gathered at great peril to themselves and don’t have much time. The dates of the drawings appear to account for the differences in their mood and style: “Railroad Connection” was made in 1943; “Eight Men,” in 1944, perhaps after Lowenstein had learned of his impending deportation to Auschwitz.

Before his imprisonment in Terezin, Joseph Eduard Adolf Spier was a well-known Dutch cartoonist, and his drawings are perhaps the most aesthetically self-conscious in the show. Almost miniature, perfectly composed, with pale watercolor washes over delicate contours, they have the quality of picture book illustrations. One depicts an interior. At first glance, the room appears almost cozy, but as you examine it object-by-object – a triple bunk bed with bundles hanging from its posts; a coat with a yellow star hung up in the corner; a row of pails on a window sill; packed suitcases – you realize that it’s a picture of life in upheaval. The white rectangle of the sky outside the window dominates the drawing, and in the center of the white space, flies a black SS flag – the darkest tonal point in the picture. Although in some ways the drawing is very realistic, both the yellow star and the black flag are out-of-scale: just slightly exaggerated in size, uncanny, incongruous.

Next to Spier’s highly deliberate, subtly chilling drawing, hangs a very different interior by the twelve-year-old Helga Weissova. “Children’s Home L410” depicts bunks and suitcases too, but unlike Spier’s, Weissova’s room is full of life and color. Three kids are sitting on the bunks, and a girl in a pink blouse is climbing a ladder. There is an immediacy here, and a lack of verdict and judgment. Weissova survived the Holocaust and went on to be an artist in Prague, but the drawings in this show are especially fascinating because they depict ghetto life from a limited, and perhaps more hopeful perspective — even in the harshest circumstances, no twelve-year-old is really in touch with their mortality. In a drawing that depicts a deportation, the two deportees march off the paper’s edge; the young artist’s attention is on the crowd of people who’d come to say goodbye – those who, like Weissova and her family, are getting a reprieve.

Among the multiple perspectives in the exhibit, Marvin Halye’s is an outlier. A U.S. Army soldier, Halye participated in the liberation of Nordhausen concentration camp. By the time Americans arrived at Nordhausen, they found just a few survivors and thousands of corpses. Halye, an accomplished artist who always carried a set of paints, documented the shocking scenes in his masterful watercolors. Perhaps too masterful. Halye is an outside observer, looking in, and his paintings have a more remote quality than the drawings of imprisoned Europeans.

There are several portraits in the show. All portraits drawn from life are essentially of two people: the subject and the artist. The interaction between these participants lends the portrait its depth and subtext. In my opinion, the strongest drawing in the show is the larger of the two portraits Manci Anis drew of her fellow prisoner Susan Weiss in the Soemmerda slave labor camp. Susan Weiss sits erect, gazing forward – this is one of those portraits that seems to look at you no matter where you are in the room. Yet, at the same time, Weiss’s gaze seems to be turned inward, her heavy-lidded eyes both expressive and withholding. Her lips are pursed, yet she seems about to speak. Manci Anis didn’t merely draw a figure of an exhausted prisoner – she created a portal into her subject’s infinitely rich interior world. Anis didn’t survive the Holocaust, but Weiss did, and so did this drawing. Weiss hid it under her mattress and underneath her prisoner uniform. I imagine her taking it out whenever she could, looking at it, and thinking, “I am here.”

“What do we talk about when we talk about war? Anything except war, it can seem, when visual art is the language,” Peter Schjeldahl recently wrote, making exceptions for Goya and Picasso. I agree that most art about war doesn’t equal its subject. But another exception must be made— for people from inside the war, who draw to save themselves.

“Rendering Witness: Holocaust-Era Art as Testimony” will be showing at the Museum of Jewish Heritage through July 5, 2020.

For information on contributing to The Forward, click HERE