Senate Conducts Another U.S. Trial Where Racism Decides the Outcome

...inspire and bring into unified action the substantial majority of U.S. people who disagree with one another on many things but agree Trump and his enablers are a danger to people and the planet... 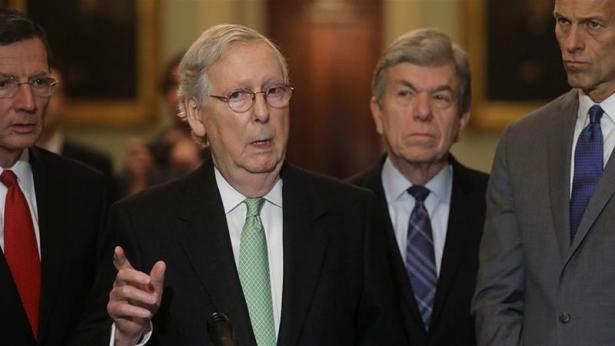 It's no accident that on the same day the Senate voted not to hear any witnesses in its sham impeachment trial the Trump administration announced it was adding six countries, including Nigeria, Africa's most populous nation, to its restrictive travel ban.

Get beneath the rhetoric and both actions are about race and racism. As have been the outcome of so many trials and so many immigration policies in U.S. history.

The bottom line consideration in those Republican senators' minds when they voted January 31 was revealed by a conservative former GOP policy director who still has ties with his old friends. Evan McMullin tweeted the day before the vote:

"Republican leaders in Congress believe - and privately say - that they fear the country is quickly changing in ways that may soon deprive them of power, and that they must use the power they have now to delay it as long as possible, even by harming the Republic if necessary."

Decoding that doesn't require re-reading the pages in "To Kill a Mockingbird" about that story's jury verdict:

"The country is quickly changing" means "the proportion of people of color is growing and white people soon might not be a majority."

"They must use the power they have now" means "democracy is a nice idea that we've said we believe in for decades, but when it comes right down to it maintaining white power in general and our white power in

"Even by harming the Republic" means "if authoritarian rule and an above-the-law strongman president will do the job, then let's get it on; all we need is four more years to create the necessary facts on the ground, we've helped the Israelis do it and in face of a "demographic threat" in this country it's now our turn."

That's the mind-set underlying the "no witnesses" vote and the upcoming acquittal.

This does not mean every Trump voter or registered Republican is a full-blown hater. It doesn't mean that over time many in the Trump camp, especially those facing economic hardship, can't be won over to a different world view. It doesn't mean the robber barons on top of the fossil fuel industry or military-industrial complex or Koch brothers empire are mainly driven by racism, only that they see riding this mentality as the necessary route to advancing their class interest in a changing world.

But the Senate vote shows that outright racist authoritarianism is in the driver's seat in today's GOP. It's get in behind the Supreme Leader or be kicked out of the club.

This is how fascism comes to power. People who start out quite a distance from the blatant haters cut deals with them because they share some common aims and think they can stay in control. But it's a slippery slope and those who don't jump off the toboggan soon enough find themselves abandoning every principle they once claimed to hold dear (Lindsey Graham, Marco Rubio, Lamar Alexander). They sometimes squirm but keep rationalizing one destructive, sycophantic action after another until lies, self-dealing and great-leader-worship become normalized in the broader society. And millions get numb or "go private" hoping to find some shelter from the storm.

In today's U.S., the Trumpists can be stopped. But only if the most conscious sector of the opposition is clear-eyed about the danger and absolutely determined to do two things:

First, confront their drive toward a racist authoritarian regime with a passionate resistance rooted in defending the humanity and equality of everyone across the globe;

Second, inspire and bring into unified action the substantial majority of U.S. people who disagree with one another on many things but agree Trump and his enablers are a danger to people and the planet: defeat Trump and the GOP at the ballot box in November, take to the streets to defend that victory in the days after the balloting when he declares the results illegitimate, and then keep on pushing toward a society that works for all.

[Max Elbaum (he/him) has been active in peace, anti-racist and radical movements since joining SDS in Madison, Wisconsin in the 1960s. The third edition of his book, Revolution in the Air: Sixties Radicals Turn to Lenin, Mao and Che, was released by Verso in 2018. Each fall he runs a Marathon for Peace to benefit antiwar and anti-militarist projects, most recently US Labor Against the War.]