The Cold War ended 30 years ago, but its cultural structures and divisions endure – perhaps, even, in the responses of some Americans to Bernie Sanders’ socialism. 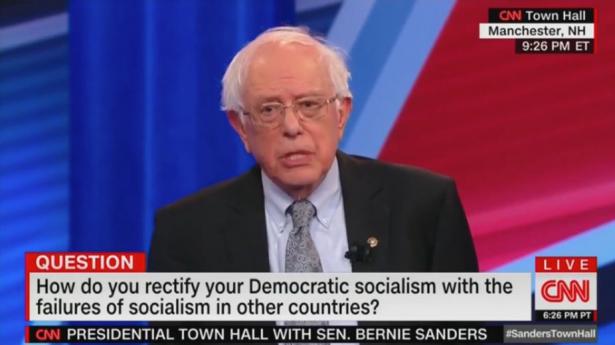 Bernie Sanders was asked at a CNN-sponsored town hall about socialism,CNN screenshot

Bernie Sanders has emerged as the Democratic front-runner in the race for the presidential nomination.

Yet even some left-leaning pundits and publications are concerned about what they see as Sanders’ potential lack of electability.

Sanders is a Democratic Socialist. And the label “socialist” is a political liability in American culture. According to a Gallup poll released on Feb. 11, 2020, only 45% of Americans would vote for a socialist.

I am a scholar of American culture with an interest in the relationship between political ideologies and popular culture. In my research, I have found that this antipathy toward socialism may not be an accident: American identity today is strongly tied to an image of capitalism crafted and advertised by the Ad Council and American corporate interests over decades, often with the support of the U.S. government. 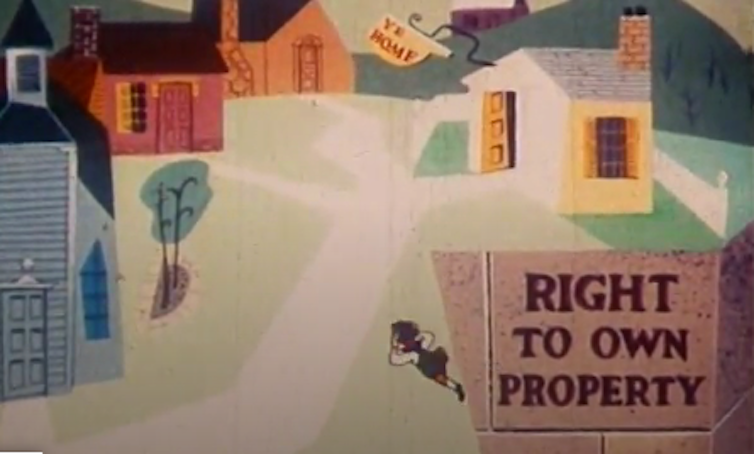 A screenshot from one of the corporate Cold War-era cartoons linking the Bill of Rights to free-enterprise ideology. Internet Archive, Prelinger Collection

In 1942, a group of advertising and industry executives created the War Advertising Council, to promote the war effort. The government compensated the companies that created or donated ads by allowing them to deduct some of their costs from their taxable incomes.

Renamed the Ad Council in 1943, the organization applied the same wartime persuasive techniques of advertising and psychological manipulation during the Cold War years, the post-war period when the geopolitical rivalry between the U.S., the USSR and their respective allies raged. One of their goals: promoting the virtues of capitalism and free enterprise in America while simultaneously demonizing the alternative – socialism – which was often conflated with communism.

Government propaganda at home portrayed the communist USSR as godless, tyrannical and antithetical to individual freedoms. As a counterpoint, America became everything the Soviet Union was not.

This link between capitalism and American national identity was advertised through a sophisticated, corporate effort as efficient and ubiquitous as state-driven propaganda behind the Iron Curtain.

The campaigns used the ideological divisions of the Cold War to emphasize the relevance of their message. In a 1948 report, the Ad Council explained its goal to the public: “The world today is engaged in a colossal struggle to determine whether freedom or statism will dominate.”

The campaigns started as a public-private partnership. At the end of World War II, the government worried about the spread of communism at home. Business interests worried about government regulations and about the rising popularity of unions. The Cold War provided both parties with a shared enemy.

One of the Ad Council’s messages about capitalism in America. Outdoor Advertising Association of America Archives, Duke University Libraries

The following year, the Ad Council launched a business-led campaign, called “The Miracle of America,” intended to foster support for the American model of capitalism, as distinct from its Western European version, which was more friendly to government intervention. It urged increased productivity by U.S. workers, linked economic and political freedom and, paradoxically, asserted capitalism’s collaborative nature.

“Sure, America is going ahead if we all pull together,” read a brochure. Another flyer, “Comes the Revolution!,” cast its support of American capitalism in the language of global struggle: “If we continue to make that system work…then other nations will follow us. If we don’t, then they’ll probably go communist or fascist.”

In its first two years, the Miracle of America message reached American audiences via 250 radio and television stations and 7,000 outdoor billboards. Newspapers printed 13 million lines of free advertising. The Ad Council boasted that the campaign made over 1 billion “radio listener impressions.”

American factory workers received about half of the 1.84 million copies of the free pamphlet “The Miracle of America.” One-quarter were distributed free of charge to schools, and 76 universities ordered the booklet.

This pro-business propaganda, expressed in the language of Cold War patriotism, had reached roughly 70% of the American population by the end of the campaign.

The efforts produced more than just print and billboard messages.

In 1946, the Alfred P. Sloan Foundation, founded by the former head of General Motors, paid the evangelical Harding College to produce “Fun and Facts about American Business,” a series of educational cartoon videos about capitalism, produced by a former Disney employee.

Between 1949 and 1952, Metro Goldwyn Mayer distributed them in theaters, schools, colleges, churches and workplaces.

The films promoted the same messages as the Ad Council campaigns, although they were not part of the project. They continued a decade-long effort by the Sloan Foundation to start, in the words of its executive director, “a bombardment of the American mind with elementary economic principles through partnering with educational institutions.”

To both Sloan and the movement’s backers, business interests were synonymous with the national interest. The free-enterprise system was a shorthand for freedom, democracy and patriotism. Unlike in Europe, the videos suggested, class struggle – of the kind that required unions – did not exist in the U.S.

In the cartoon “Meet the King,” Joe, the archetypal American worker, realizes he is not an exploited proletarian. Instead, he’s a king, “because he can buy more with his wages than any other worker on the globe.”

Conversely, government regulations of, or interventions in, the economy were described in the cartoons as socialist tendencies, bound to lead to communism and tyranny.

“Make Mine Freedom,” and “It’s Everybody’s Business” presented the state as a perpetual threat. A money-sucking tax monster, the government reduces everyone’s profits, crushes private enterprise and takes away individual freedoms: “No more private property, no more you.”

According to an estimate from Fortune magazine, by 1952, American businesses spent US$100 million each year, independent from any Ad Council campaigns, promoting free enterprise.

In the early 1970s, business responded to rising negativity about corporate power with a new campaign coordinated by the Ad Council.

“The American Economic System … and Your Part in It” was launched alongside the bicentennial national celebrations. It was the largest centralized pro-business public relations project thus far, but only one of many independently run by corporations. 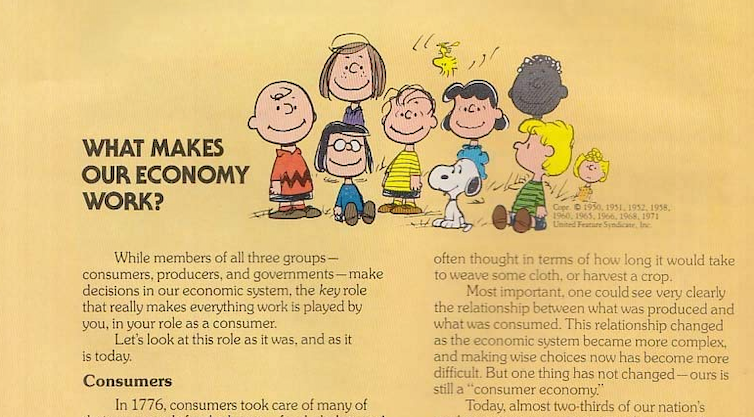 Part of a page from the 1970s booklet that used Charles Schultz’s ‘Peanuts’ comic strips to explain the benefits of America’s economic system. Amazon

The media industry donated $40 million in free space and air time in the first year of the campaign. The Department of Commerce and the Department of Labor contributed about half a million dollars toward the production costs for a 20-page booklet.

That booklet used data provided by the departments of Commerce and Labor and Charles Schulz’s ‘Peanuts’ comic strips to explain the benefits of America’s economic system. The system was again presented as a foundational freedom protected by a Constitution whose goal was to “maintain a climate in which people could work, invest, and prosper.”

By 1979, 13 million copies had been distributed to schools, universities, libraries, civic organizations and workplaces.

For four decades, the Cold War provided a simple good-vs.-evil axis that consolidated the association between freedom, American-ness and free-enterprise capitalism.

The business community, independently and through the Ad Council, funded massive top-down economic education programs which shaped American perceptions of business and government and of capitalism and socialism.

The Cold War ended 30 years ago, but its cultural structures and divisions endure – perhaps, even, in the responses of some Americans to Bernie Sanders’ socialism.