Right now, government money is flowing. But soon the self-appointed guardians of “fiscal responsibility” will call for cuts to Social Security, Medicare, and SNAP, while leaving the defense budget and large tax breaks for the wealthy intact. 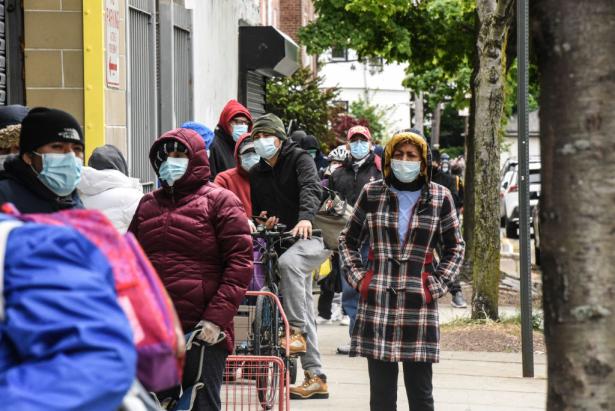 People wait in line to receive food donated by SOMOS, in partnership with World Central Kitchen and Maestro Cares Foundation, on May 11, 2020 in the Elmhurst neighborhood of Queens in New York City., Stephanie Keith/Getty

Four coronavirus stimulus bills have become law, with less than 10 percent of the $3 trillion authorized by Congress moving directly into the pockets of workers. Instead, we got a program that purported to provide forgivable loans to small businesses to cover their payrolls rife with institutional corruption.

Progressives received a pittance, with their priorities, such as debt relief for students and infrastructure spending, falling by the wayside. On the other hand, centrists and Republicans feasted at the trough with tax breaks and other goodies for their K Street donors.

After this spending, along with the Trump tax cuts and massive defense spending increases, it is inevitable that within the next few months, in particular if a Democratic administration enters the White House, there will be loud cries for a new age of austerity. Republican governments feel free to spend on wars and tax giveaways going for the wealthy, powerful, and well connected, while Democratic ones try to claim the mantle of fiscal responsibility and institute often-odious policy restraints in order to cut the deficit.

Consider this: the entirety of the 2018 budget deficit was comprised of the Bush and Trump tax cuts, direct costs of the wars in Iraq and Afghanistan, and base defense increases.

The bipartisan fiscal consensus among Washington elites was fertilized over the past few decades by Peter Peterson’s Blackstone, private-equity fortune. His dollars were distributed to think tanks and political institutions, with audiences in both parties fomenting the ludicrous idea that there was an actual grassroots constituency around cutting the deficit.

Unlike Democrats, Republicans never let deficits get in the way of the conservative wing of their party’s ideological priorities. (See Dick Cheney: “Deficits don’t matter.”) Instead, they cynically used deficits as a political weapon against moderate Democrats who melt down at the suggestion that perhaps the Treasury Department should issue a few more bonds so the federal government can make substantial investments in areas outside of warfare.

Peterson is dead, but his movement lives on, and his acolytes are preparing to wage a new war against progressive policy.

Maya MacGuineas, president of the Committee for a Responsible Federal Budget, told Yahoo Finance during the last week in April, “We should think about putting in place a mechanism so that when GDP is back on track and employment is back on track, we automatically go into this question of how are we . . . going to rethink some of tax reform and rethink our spending promises, and get them back so they are not adding trillions to the debt every year, which is what we are on track to be doing right now.”

While ostensibly noting that countercyclical spending is necessary in a time of crisis, MacGuineas’s organization issued a press release condemning effective stimulus measures such as infrastructure spending and student debt cancelation as “unrelated pet projects” and “things that don’t help us fight the virus or provide direct economic relief.”

The economy is in shambles; tens of millions of people are unemployed; our health care system is a nightmare; if people had 401(k)s, they likely took a massive hit as the stock market crashed; and most people don’t have enough savings to survive going without a paycheck at a time when going to work could literally mean a contracting a deadly virus, yet these deficit fetishists are already dismissing ideas that would bring financial assistance to tens of millions of Americans as “pet projects.”

While constraints on spending are being ignored now, it is guaranteed that in a few months, a completely theoretical notion of how much the federal government can borrow will be far more important than meeting human needs. MacGuineas has spent decades waving the deficit flag, so her take is expected.

The battle progressive lawmakers must wage is against centrists who will continue to use the ruse of fiscal responsibility as a bad-faith argument against progressive policy-making.

While it might seem off the beaten path to start fighting an esoteric battle about the national debt as we scrape and claw for a modicum of progressive policies in coronavirus relief bills, failing to engage now condemns us to losing it in the future.

It does not take a crystal ball to see the trite op-eds coming in January 2021:

“It is about making tough choices.”

“If your family ran up three trillion dollars on the credit card, they’d have to figure out a way to pay it back.”

The self-appointed guardians of “fiscal responsibility” will call for cuts to Social Security, Medicare, Medicaid, SNAP, and housing subsidies, while leaving defense and large tax breaks for the wealthy and corporations intact.

Leftists and progressives need to make it clear that the era of deficit hysteria is over, that talks of “grand bargains” are off the table from day one, and that no cuts to benefits critical to a family’s survival will be acceptable.

Larry Summers, who is now advising Joe Biden, called for cuts to Social Security and Medicare at the beginning of Barack Obama’s first term. In fairness, nowadays, even Summers has dropped his deficit obsession, but the status quo in Washington will be for senior members of any Democratic administration to be pushing similar policies.

While progressives have become fairly adept at blocking Social Security cuts, as they did during the Clinton, Bush, and Obama administrations, defending the status quo is clearly not good enough. (I once witnessed a confrontation in the large conference room on the first floor of the AFL-CIO building, where a senior union office told Summers during his tenure as a White House economist, “There are two types of people in this world. Those who cut Social Security, and those who are allowed in this building.”)

The current crisis reveals that anything short of a massive increase in the social safety net is a death sentence to some of our fellow citizens. We cannot allow the hollow whining of centrists to stand in our way.