I often used to look at the union work as something like walking a tightrope backwards while juggling without a net … The wire must be made of grassroots. The moment the union highwire artist feels those grassroots under foot, they know they are safe 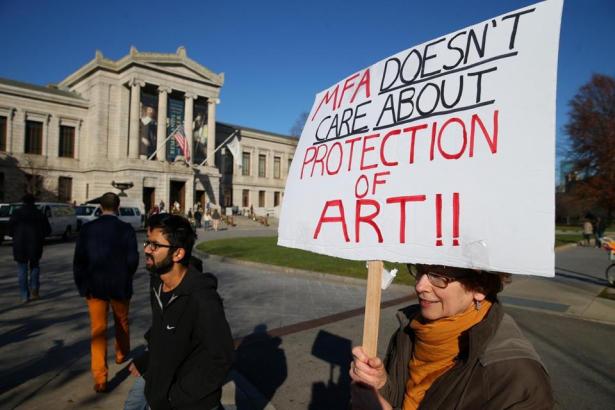 In 2015, members of the Museum Independent Security Union protested the treatment of security guards at the MFA., Jonathan Wiggs/Boston Globe

In those words, Michael Raysson encapsulates the reason security guards at the Boston Museum of Fine Arts were successful not only in organizing a union but also in keeping it alive.  His book, The Art of Organizing: The Boston Museum of Fine Arts Union Drive (Hard Ball Press, 2020) tells the story of how the union was able to survive and thrive – and continues to thrive today – even with a turnover in the workforce, turnover in the core group of active members all the while facing the unending hostility of management with its single-minded focus on the bottom line. A management, needless to say, that would have liked nothing better than to eliminate the union altogether. What gives Raysson’s telling of this story added meaning is that he provides a level of personal detail too often lacking in accounts of union building. This isn’t the story of glorious victories or tragic defeats, rather it is the story of everyday integrity and decency, the true bedrocks of unionism.

Although being a security guard was a low-paying job, the job itself was low-stress. Part-time workers were able to follow other pursuits, full-time workers were able to make ends meet through plentiful overtime. Then in 1988, six months after Rayson began working at the museum, management changed tune – the friendly workplace atmosphere ended, strict rules with no purpose other than harassment were implemented, job security and overtime were threatened.  It was in response to that shifting reality that Raysson and a few of the other guards began thinking they might need a union.

Implementing that decision required overcoming a major initial hurdle – none of the guards had any union experience and were unsure of what to do and where to go. The labor movement doesn’t have walk-in centers in shopping malls and housing developments offering advice to those who want to start up an organization – so Raysson and his co-workers had to do their own exploring. They found encouraging help from (the then still new) “Jobs with Justice” and from the long-established, still militant United Electrical Workers. However, in their research they discovered an unanticipated problem: the Taft Hartley Act does not allow guards to be in the same union as non-guards – thus affiliation with the AFL-CIO or even independent unions with members in other sectors was prohibited.

They then sought out a union for guards which did provide help with their initial organizing drive. After they won recognition and negotiated their first contract, they discovered that the union they joined wasn’t interested in truly representing them. Disaffiliation came next, after which they created a new independent union, winning recognition all over again and bargaining a contract worthy of the time and commitment already spent. Management attempted to defeat the union at that early stage by withholding dues check-off during the transition to becoming an independent union, but that step backfired – collecting dues member by member – though time consuming, laid the basis for a strong relation between stewards and officers with the entire workforce, in consequence making the union all the stronger going forward.

Most books might end there, but Raysson takes it a step further by giving a picture of subsequent negotiations which provides insight into nature of labor-management relations as a whole. And because he and his fellow unionists began negotiations as complete novices, his advice about how to set demands; resolve internal union differences around when to stand firm, when to compromise; about how to assess the relative strength/weakness across the table, is particularly valuable. The hostile atmosphere they faced while learning is revealed by the simple fact that each negotiation in which the union was successful in gaining improvements resulted in management’s chief negotiator being fired (the one exception lasted two rounds before being terminated). Clearly, the intent of the Museum’s Board was to keep up pressure. The union was small, without full-time officers, with a dispersed workforce as guards typically worked in separate galleries or areas. And they faced off against a behemoth like the Museum Board whose members came from Boston’s rich and powerful elite – yet the union was able to prevail. The reason was reliance on those grassroots, Raysson mentioned, nourished by their approach from the moment they set out to form an independent union:

“It was our job, as I saw it, to sell the guards on themselves, and ‘ourselves all together’ were the superior force and the better force … We had to convince our members that the problem was not a Union, but the type of Union, and that a new independent union was in our best interests and what we really needed.” (p. 56)

At the heart of the union they created were “communicating stewards,” to make certain that every worker (those who joined the union, those who didn’t) were spoken to and were heard. That didn’t mean that there were no internal issues, personal disputes, seemingly irresolvable differences of opinion, but ultimately trust and a need to work together enabled resolutions even when none had seemed possible. Potentially more damaging, a black-white divide almost undermined the union at its beginning. That was overcome by honesty, by looking at the world through the eyes of another – and by the intervention of one worker who stepped up, helped create a bridge and mutual understanding. That worker wasn’t active in the union for any length of time, but he stepped in at a critical time, providing help for the better when most needed. Raysson mentions others who did the same – people whose “small” contributions were as important as the large contributions of members who were more deeply active in the union. That was important with such a diverse work force, multi-racial, multinational, with political views of members ranging from right to left – for it was the multiple points of views and perspectives, the outlook of patient compromisers and push-the-envelope militants that together created a vibrant, living organization rooted in solidarity.

The workers didn’t do this alone – they had help from consultants and labor lawyers, from community members and local politicians, from other unions and activists; yet it was help, nothing more – members of the union controlled their own agenda, their own organization, which is what gave it the strength to survive.

Museum security guards are considered low skilled and easily replaceable, exhibit curators are highly educated, highly skilled. – yet the same management crackdown that caused guards to create a union was also directed at those curators – facing management alone, many were fired, others found their working conditions downgraded. There is perhaps no better explanation of the power of collective action, of unionism then that – and the story behind that explanation all the more reason to read Raysson’s reminiscence.

An Aside that is Central to All

My observation of the Museum after the corporate takeover was that for all intents and purposes, it was run like a small dictatorship or a monarchy. If you went along with the program, I suppose it was a ‘nice’ dictatorship. If you didn’t … you were out of there by the seat of your pants. And just forget freedom of speech.” (p. 29)

When growing up I used to enjoy going to the Metropolitan Museum of Art in New York – it was free, spacious; walking through the halls and galleries, I was able to lose myself in various pieces of art and from there let my mind wander. I was not and never have been an art student, and though I respect knowledge, what mattered to me most when young was seeing works new to me (even if venerable) to challenge my eyes, ease my thoughts, allow space for my own reflections. The experience was always enhanced by the sense of sharing a yearning for quiet with other patrons, whether those more visual, more knowledgeable than myself, or those similarly there just to get away to a place filled with quiet and beauty apart from the hustle and bustle around us.

Going to museums today is a vastly different experience – they thrive on crowds, on special exhibits designed to attract visitors in ever greater numbers. Along with that are high admission costs, fancy gift shops and pricey places to eat. There are exceptions of course, and even in filled to the brim rooms, the art can be affecting, meaningful. Although the change was gradual, it has been real and noticeable. I never fully understood what that was all about until reading Raysson’s book, for he describes the takeover of museum boards by hedge fund managers and corporate executives, pushing aside the old elites that had run museums in ages past. Those elites were themselves guilty of much, museums had much to answer for by way of theft and a host of other sins. Nonetheless, the institutions themselves were designed to be a step removed from the world of commerce – unlike today’s neoliberal world, where nothing is given immunity to the almighty dollar. And part of the worship of the dollar was expressed in the management attack on the working conditions of those security guards at the bottom of the museum employment ladder. That is not the primary value of this short book, yet it is an important part of the story told and a reminder that when we look at the world through the eyes of workers at the “bottom” of an industry, it often reveals hidden truths the institution would rather conceal.

[Kurt Stand was active in the labor movement for over 20 years including as the elected North American Regional Secretary of the International Union of Food and Allied Workers until 1997.  That year he was arrested and served 15 years in prison on charges of having committed espionage for the GDR, charges he unsuccessfully contested at trial and upon appeal.  Currently he works at a bookstore, is a member of the Washington Metro DSA, is active in Progressive organizations in his community of Cheverly, Maryland, serves as a Portside Labor Moderator and is the facilitator of a Metro DC Labor/Reentry jobs project. View all posts by Kurt Stand →]