Across the country there have been more than 4,700 demonstrations - an average of 140 per day, since the first protests began, according to a Times analysis. Turnout ranges from dozens to tens of thousands in about 2,500 small towns and large cities 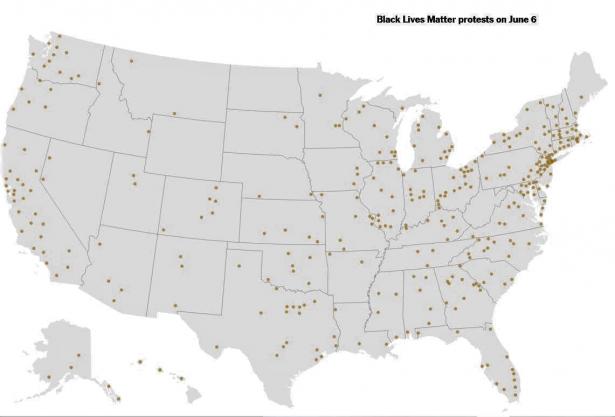 Black Lives Matter protests on June 6. Crowd Counting Consortium, Edwin Chow and New York Times analysis. The Times partnered with Edwin Chow, an associate professor at Texas State University, to count the protesters based on available aerial images from, June 6 and added those estimates to data from the Crowd Counting Consortium. Counting efforts are still ongoing, so the map is not comprehensive and totals shown are an average of high and low estimates.

The recent Black Lives Matter protests peaked on June 6, when half a million people turned out in nearly 550 places across the United States. That was a single day in more than a month of protests that still continue to today.

Four recent polls — including one released this week by Civis Analytics, a data science firm that works with businesses and Democratic campaigns — suggest that about 15 million to 26 million people in the United States have participated in demonstrations over the death of George Floyd and others in recent weeks.

These figures would make the recent protests the largest movement in the country’s history, according to interviews with scholars and crowd-counting experts.

“I’ve never seen self-reports of protest participation that high for a specific issue over such a short period,” said Neal Caren, associate professor at the University of North Carolina at Chapel Hill, who studies social movements in the United States.

While it’s possible that more people said they protested than actually did, even if only half told the truth, the surveys suggest more than seven million people participated in recent demonstrations.

The Women’s March of 2017 had a turnout of about three million to five million people on a single day, but that was a highly organized event. Collectively, the recent Black Lives Matter protests — more organic in nature — appear to have far surpassed those numbers, according to polls.

“Really, it’s hard to overstate the scale of this movement,” said Deva Woodly, an associate professor of politics at the New School.

Professor Woodly said that the civil rights marches in the 1960s were considerably smaller in number. “If we added up all those protests during that period, we’re talking about hundreds of thousands of people, but not millions,” she said.

Even protests to unseat government leadership or for independence typically succeed when they involve 3.5 percent of the population at their peak, according to a review of international protests by Erica Chenoweth, a professor at Harvard Kennedy School who co-directs the Crowd Counting Consortium, which collects data on crowd sizes of political protests.

Why this movement is different

Precise turnout at protests is difficult to count and has led to some famous disputes. An amalgam of estimates from organizers, the police and local news reports often make up the official total.

But tallies by teams of crowd counters are revealing numbers of extraordinary scale. On June 6, for example, at least 50,000 people turned out in Philadelphia, 20,000 in Chicago’s Union Park and up to 10,000 on the Golden Gate Bridge, according to estimates by Edwin Chow, an associate professor at Texas State University, and researchers at the Crowd Counting Consortium.

Across the United States, there have been more than 4,700 demonstrations, or an average of 140 per day, since the first protests began in Minneapolis on May 26, according to a Times analysis. Turnout has ranged from dozens to tens of thousands in about 2,500 small towns and large cities.

“The geographic spread of protest is a really important characteristic and helps signal the depth and breadth of a movement’s support,” said Kenneth Andrews, a sociology professor at the University of North Carolina at Chapel Hill.

One of the reasons there have been protests in so many places in the United States is the backing of organizations like Black Lives Matter. While the group isn’t necessarily directing each protest, it provides materials, guidance and a framework for new activists, Professor Woodly said. Those activists are taking to social media to quickly share protest details to a wide audience.

Black Lives Matter has been around since 2013, but there’s been a big shift in public opinion about the movement as well as broader support for recent protests. A deluge of public support from organizations like the N.F.L. and NASCAR for Black Lives Matter may have also encouraged supporters who typically would sit on the sidelines to get involved.

The protests may also be benefitting from a country that is more conditioned to protesting. The adversarial stance that the Trump administration has taken on issues like guns, climate change and immigration has led to more protests than under any other presidency since the Cold War.

According to a poll from The Washington Post and the Kaiser Family Foundation, one in five Americans said that they had participated in a protest since the start of the Trump administration, and 19 percent said they were new to protesting.

“Without gainsaying the reality and significance of generalized white support for the movement in the early 1960s, the number of whites who were active in a sustained way in the struggle were comparatively few, and certainly nothing like the percentages we have seen taking part in recent weeks,” said Douglas McAdam, an emeritus professor at Stanford University who studies social movements.

Half of those who said they protested said that this was their first time getting involved with a form of activism or demonstration. A majority said that they watched a video of police violence toward protesters or the Black community within the last year. And of those people, half said that it made them more supportive of the Black Lives Matter movement.

The protests are colliding with another watershed moment: the country’s most devastating pandemic in modern history.

“With being home and not being able to do as much, that might be amplifying something that is already sort of critical, something that’s already a powerful catalyst, and that is the video,” said Daniel Q. Gillion, a professor at the University of Pennsylvania who has written several books on protests and politics.

“If you aren’t moved by the George Floyd video, you have nothing in you,” he said. “And that catalyst can now be amplified by the fact that individuals probably have more time to engage in protest activity.”

Besides the spike in demonstrations on Juneteeth, the number of protests has fallen considerably over the last two weeks according to the Crowd Counting Consortium.

But the amount of change that the protests have been able to produce in such a short period of time is significant. In Minneapolis, the City Council pledged to dismantle its police department. In New York, lawmakers repealed a law that kept police disciplinary records secret. Cities and states across the country passed new laws banning chokeholds. Mississippi lawmakers voted to retire their state flag, which prominently includes a Confederate battle emblem.

“It looks, for all the world, like these protests are achieving what very few do: setting in motion a period of significant, sustained, and widespread social, political change,” Professor McAdam said. “We appear to be experiencing a social change tipping point — that is as rare in society as it is potentially consequential.”