books Long Past Due: Joan Wallach Scott's On the Judgment of History.

Three efforts to right historical wrongs - Nuremberg Trials' prosecution of Nazi war crimes but not crimes against its own people, South Africa's Truth and Reconciliation established the former if not the latter, and today's demand for reparations. 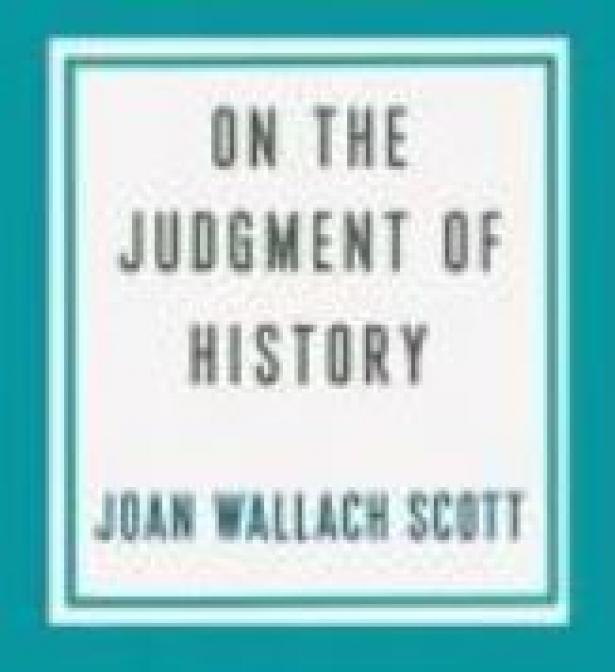 The scene in Charlottesville, Va., three years ago -- the Confederate flags, the tiki-torch Nazis, the lethal use of a car against counterdemonstrators -- left Joan Wallach Scott feeling perplexity and horror, as she recounts in On the Judgment of History (Columbia University Press).

It was not just the thuggish hatred on display, which was nothing new. Beyond that there was a kind of menacing shamelessness about all of it, even before the president gave his wink of approval: a defiance of the idea that slavery, white supremacy and fascism had been consigned to the dustbin of history. Or its septic tank, perhaps.

Scott’s dismay was worse confounded by the realization that she still retained some residual trust in "history (History?) [as] an autonomous moral force that can motivate action and set straight the record of human deeds and misdeeds." A professor emerita in the School of Social Science in the Institute for Advanced Study in Princeton, N.J., Scott has done her part to dismantle naïve metanarratives of progress, yet she was harboring one, all the same.

The argument of On the Judgment of History aims right at that ambivalence, which has its roots in the commonplace desire to believe in the possibility of secular theodicy: that is, an account of the existence of evil that nonetheless assures us some good will come of it. The yearning is understandable but problematic. A belief that the long moral arc of the universe bends toward justice can be inspiring. But it also runs the risk of turning into complacency.

Scott’s purpose is not to reinvigorate public confidence that a moral order is emerging from the chaos of history -- nor to debunk that idea, either. Rather than batting around general ideas about truth, justice and the common good, she analyzes three major cases of a legacy of systemic violence against innocent people becoming a matter for evaluation and judgment. They are the Nuremberg trials of Nazi officials following World War II, the Truth and Reconciliation Commission in postapartheid South Africa, and the movement for reparations for the enslavement and ongoing subjugation of African Americans. (This material was originally presented as the Ruth Benedict Lectures at Columbia University last year.)

In the German and South African cases -- utterly different as they were in how they were conducted and in their consequences -- a judgment of the past was rendered by tribunals following legal and juridical precedent. That was fully in accord with a strong current of Western thought for which the modern nation-state was the culmination of previous human history and the framework that any quest for justice must accept.

“At Nuremberg,” Scott writes, “the defense of human rights was established as the job of ‘progressive’ nation-states. In the juridical logic that prevailed, benevolent nation-states rescued or protected victims from evil, thereby establishing themselves as the agents of the judgment of history.” The Truth and Reconciliation Commission took the Nuremberg process as a reference point but pursued the same “juridical logic” in a different direction: using the medium of quasi-judicial hearings to assure that the atrocities of previous decades were inscribed in the public record, postapartheid South Africa could join the ranks of morally legitimate nation-states.

And so judgments of history were rendered -- though on closer examination, they are not the exemplary findings people often take them to be.

The chief prosecutor at Nuremberg, Robert Jackson, an associate U.S. Supreme Court justice, made clear that a country’s oppression of its population did not count against the presumption of its legitimacy as a sovereign nation-state: “How a government treats its own inhabitants generally is thought to be no concern to other governments or of international society.” Only Nazi Germany’s aggression against other sovereign nation-states made it an outlaw regime. He precluded consideration of the regime’s prewar atrocities or its race laws -- the latter being modeled in part on American jurisprudence. The defendants were condemned for war crimes, and some were executed. But the “judgment of history” indemnified the prosecutors (which also included the Soviet Union and European powers with colonial possessions) for the violence within their own borders and empires.

The Truth and Reconciliation Commission established in 1996 placed some reference between itself and the Nuremberg process, in particular by limiting itself to putting atrocities on the record but not on trial. Punishment was ruled out from the start -- a concession to the reality that much of the personnel of the apartheid system retained military and economic power. The commission’s chair, Bishop Demond Tutu, said, “Neither side could impose victor’s justice because neither side had won the decisive victory that would have enabled it to do so …”

Victims, Scott writes, were defined as “those with direct experience of harm in the time frame of the Commission’s deliberations (1960-94), not the collective targets of apartheid’s social and political rule.” The first dozen years following apartheid’s establishment in 1948 were disregarded. If truth was sought within definite limits, reconciliation was a foregone conclusion. It amounted to a demand for forgiveness rather than for justice. And forgiveness is precisely a thing that cannot be demanded.

The book's discussion of the call for African American reparations -- expressed in movements that originated even before the abolition of slavery and that have taken on renewed vigor in recent years -- reframes ideas about the nation-state, racism and raisons d’état from the previous two chapters. But it is not a matter of drawing parallels or finding analogies. No historic trial or quasi-judicial proceeding provides a focus for Scott's analysis. "The juridical logic of a benevolent state taking up the cause of victims of past evil doesn’t operate in [reparation] movements’ demands," she writes. Indeed, questions of strategy and tactics, of movement organizing and political-economic brass tacks, never come into view here, although Scott does sketch enough of the social history to clarify that slavery is not the only aspect of history that is up for judgment:

Arguably, what was most damaging from a long-term perspective was the transformation of the formerly enslaved into debtors, usually as tenant farmers or sharecroppers and as customers forced to buy on credit in local stores. (In some of these stores … African Americans were coerced at gunpoint into setting up charge accounts!) In this way, those once enslaved were trapped anew -- this time in financial relationships that they could not escape and that provided a measure of economic compensation to their former owners … In order to secure southern senators’ support of FDR’s Social Security insurance (for the old and the unemployed), agricultural workers and domestics -- jobs in which African Americans predominated -- were not covered. The list goes on and on.

At Nuremberg and in the Truth and Reconciliation proceedings, the rendering of a judgment assumed "a certain finality," she writes -- one shoring up the fundamental legitimacy of the progressive nation-state and, in effect, projecting the end of an injustice. (If not the End of History.) Something very different is implied by reparations.

"The demand for restitution of lost earnings," Scott writes, "turns African Americans into creditors who are calling due the accounts; it gives them agency, not as victims, but as people right fully claiming what they are owed. At the same time, the demands for reparations, even when sums are specified, make clear that the debt can never be fully discharged. It is impossible to close the books on slavery and its legacy."

Book author Joan Wallach Scott is professor emerita in the School of Social Science at the Institute for Advanced Study in Princeton, NJ. Her Columbia University Press books include Gender and the Politics of History, thirtieth anniversary edition (2018), and Knowledge, Power, and Academic Freedom (2019).