'What an Anti-Everybody Agenda Looks Like': AOC Excoriates Trump for Walking Away From Covid-19 Relief Talks

"Millions falling into poverty, millions on the edge of eviction, millions going hungry, millions losing their healthcare and this megalomaniac dime store dictator puts his knee of the neck of a nation." 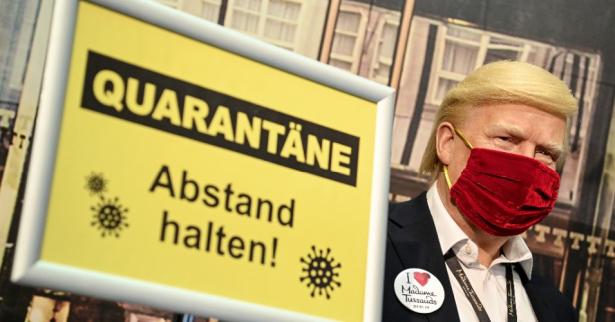 The wax figure of U.S. President Donald Trump stands behind a barrier and signs saying "Keep a distance from quarantine" at Madame Tussauds Berlin, Britta Pedersen/picture alliance via Getty Images

While still battling Covid-19 himself, President Donald Trump on Tuesday provoked fierce condemnation by announcing that the White House will no longer negotiate with Democratic congressional leaders on another coronavirus relief package—even though millions of Americans remain jobless, hungry, and at risk of eviction.

In a series of tweets, Trump accused House Speaker Nancy Pelosi (D-Calif.)—whose chamber passed one relief measure in May and another last week that were both rejected by Senate Republicans and the White House—of "not negotiating in good faith." Trump also claimed he will win the November contest against Democratic nominee Joe Biden and then "immediately" work to pass a "major" stimulus bill.

Rep. Alexandria Ocasio-Cortez (D-N.Y.) was among those who responded to Trump on Twitter, asserting that the president and GOP are pursuing an "anti-everybody agenda" while attempting to push through a Supreme Court nominee whose positions could jeopardize the healthcare of millions of people nationwide:

Rep. Ilhan Omar (D-Minn.) also took to Twitter to call out Trump and the Republicans. Tying the move to the general election—for which early voting has already begun—she said, "The only logical response to this fuckery, is to vote them out."

Princeton University professor, writer, and activist Keeanga-Yamahtta Taylor declared: "We need more than an election; we need a revolution."

Pelosi, who noted Powell's remarks in her statement responding to the news, said that "today, once again, President Trump showed his true colors: putting himself first at the expense of the country, with the full complicity of the GOP Members of Congress."

In walking away, Pelosi said, "he shows his contempt for science, his disdain for our heroes—in healthcare, first responders, sanitation, transportation, food workers, teachers, teachers, teachers and others—and he refuses to put money in workers' pockets, unless his name is printed on the check."

Rep. Don Beyer (D-Va.), the top House member on Congress' Joint Economic Committee, warned in a statement responding to Trump on Tuesday that the president's decision imperils economic recovery from the crisis.

"President Trump's stunning reversal on stimulus negotiations could not have come at a worse time," Beyer said. "His tweets justifying this erratic about-face misstated Democrats' compromise position, formalized in recently passed legislation, by hundreds of billions of dollars, showing he is either unaware of what is happening with negotiations or deliberately trying to mislead the country."

Main Street Alliance executive director Amanda Ballantyne said that "for Trump to stop negotiations on urgently needed relief, stating he will only resume negotiations after he 'wins' the election shows callous disregard for millions of Americans suffering extreme financial hardship. The president appears willing to take the economy down with him if he fails, at this point."

"Small businesses have waited far too long for needed relief, and the consequences of delay have meant hundreds of thousands of closures impacting the labor market and economy," she continued, urging lawmakers to defy Trump. "This is no time for political brinksmanship. Senate Republicans must come to the table and take action."

Washington Post White House economics reporter Jeff Stein detailed some of the anticipated consequences of the Senate GOP obeying Trump in a pair of tweets:

According to Stein, White House economic adviser Stephen Moore said of Trump's decision to ditch relief talks: "From a political and a policy standpoint, this was a shrewd move... A deal on the Pelosi plan would have completely divided the Republican Party on the eve of the election."

Noting the mounting U.S. death toll from the pandemic, Greenpeace USA program director Lindsey Allen accused the president of "playing games with the health and safety of millions of Americans" and said "his decision to postpone a stimulus that would help working families across the country will no doubt lead to more suffering."

"It is unconscionable that to do anything other than fast-track the HEROES Act, which would provide critical relief but has been stalled in the Republican-controlled Senate for months," Allen said of the House-approved measure. "Trump knows he is losing support as Election Day draws near, so he's doing everything in his power to threaten our confidence in democracy through deception and disruption."

"His lies about election fraud and chaos are designed to discourage voting and encourage right-wing violence," she added. "But the people elect the president and if the people vote Trump out, he will go. We must count every vote—no matter how long it takes—because every vote counts."