The FBI said today that it foiled a plot by six men to kidnap Michigan Gov. Gretchen Whitmer and overthrow the state's government. Armed right-wing protesters stormed the Michigan Capitol earlier this year... 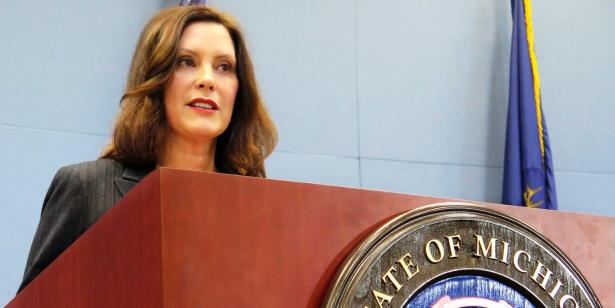 Federal prosecutors discussed details of the alleged plot at a press conference on Thursday. FBI agents and Michigan state police officers spent hours on Wednesday night raiding a home in Hartland, Michigan, that was related to the investigation, WXYZ reported.

An FBI affidavit said the men reached out to members of an armed right-wing militia in Michigan to carry out their plan.

"In early 2020, the FBI became aware through social media that a group of individuals were discussing the violent overthrow of certain government and law-enforcement components. Among those individuals identified were Croft and Fox," Richard Trask II, an FBI agent, wrote in the sworn affidavit.

"Through electronic communications, Croft and Fox agreed to unite others in their cause and take violent action against multiple state governments that they believe are violating the U.S. Constitution."

Trask added: "Several members talked about murdering 'tyrants' or 'taking' a sitting governor. The group decided they needed to increase their numbers and encouraged each other to talk to their neighbors and spread their message. As part of that recruitment effort, Fox reached out to a Michigan based militia group."

Trask said the FBI had scrutinized the militia group in March when a member of the group told the bureau they were concerned about its plans "to target and kill police officers." That person later agreed to become a "confidential human source," Trask said, adding that the FBI was able to monitor Fox's and others' activities through such sources.

On June 14, a source "participated in a consensually recorded telephone call" with Fox, who "said he needed '200 men' to storm the Capitol building in Lansing, Michigan, and take hostages, including the governor," Trask wrote. He added that Fox said that "they would try the Governor of Michigan for 'treason,' and he said they would execute the plan before the November 2020 elections."

The next month, an FBI source recorded a meeting in which the men "discussed attacking a Michigan State Police facility, and in a separate conversation after the meeting, Garbin suggested shooting up the Governor's vacation home," the affidavit said.

At a meeting on July 27, the affidavit said, Fox and an FBI informant discussed kidnapping Whitmer, and Fox said: "Snatch and grab, man. Grab the f---in' governor. Just grab the b----. Because at that point, we do that, dude — it's over."

WOOD-TV reported that Michigan Attorney General Dana Nessel also on Thursday announced state charges against seven people connected to the kidnapping plot, accusing them of finding out where police officers lived and threatening them.

Whitmer drew the ire of far-right and right-wing protesters after she ordered a lockdown in her state earlier this year as the coronavirus spread in the US. Many Michiganders expressed anger at Whitmer's executive order on social media and in nearly 1,200 emails to Business Insider.

In late April, hundreds of protesters converged on the state's Capitol to protest Whitmer's extension of a stay-at-home order. At that point, Michigan health officials had reported more than 41,000 COVID-19 cases and 3,789 deaths.

Many of the protesters were carrying guns and were photographed confronting lawmakers in the state's Senate. 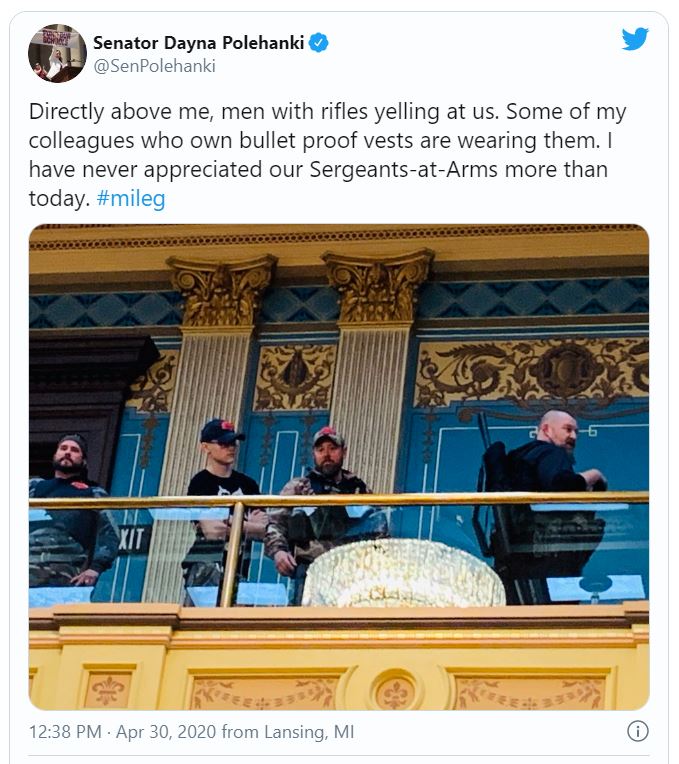 Days earlier, President Donald Trump had called on his supporters in a tweet to "LIBERATE MICHIGAN."

After the protest, Trump refused to condemn the display and called right-wing demonstrators who carried guns into the Capitol "very good people." He also urged Whitmer to "make a deal" with them.

During a press conference on Thursday, Whitmer said Trump has been "fomenting anger, and giving comfort to those who spread fear, hatred, and division." 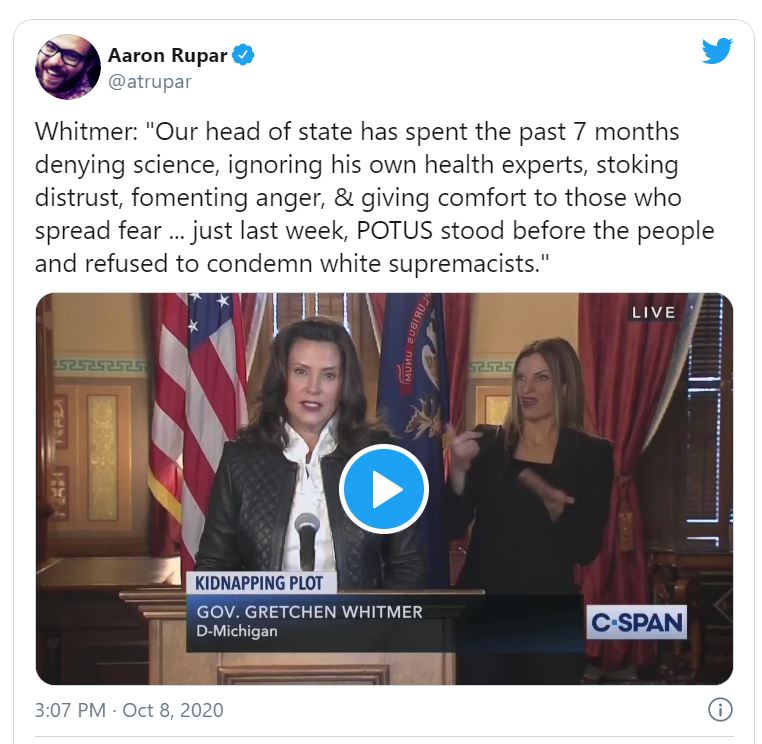 The Michigan governor excoriated Trump for refusing to explicitly condemn white supremacist groups during the first presidential debate last week, and suggested the president was "complicit" in extremist violence in the US.

"When our leaders meet with, encourage or fraternize with domestic terrorists they legitimize their actions and they were complicit," Whitmer added. "When they contribute to hate speech, they're complicit."