We Fought Against South African Apartheid, and We’re Appalled by Jeremy Corbyn’s Suspension

South African freedom fighters here respond to the purge of Jeremy Corbyn from membership in Britain's Labour Party last week, over charges that he is anti-Semitic. The purge was reversed this week by the party's National Executive Committee. 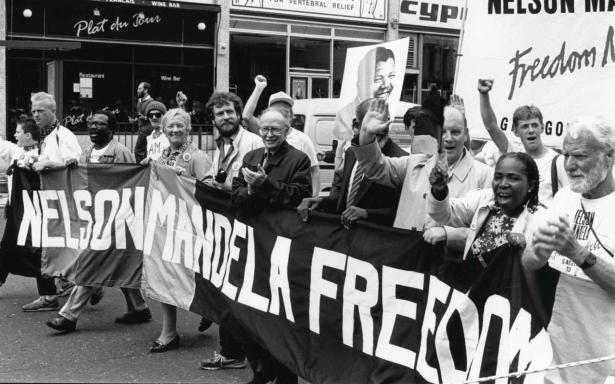 Many of us experienced, in the most direct sense, Jeremy Corbyn's (fifth from left, holding the banner) commitment to our struggle to topple the apartheid regime and are able to testify to that.,

Jeremy Corbyn's suspension from the Labour Party is shameful, not least because he is one of the party's most steadfast longtime anti-racist activists. We should know: we fought by his side to end apartheid in South Africa.

appalled were Pallo Jordan, Ebrahim Ebrahim, and I at the Labour Party’s suspension of Jeremy Corbyn, their former leader, on October 29, that we drafted a petition directed to his successor, Keir Starmer, as follows:

We, South Africans, are deeply disturbed at the Labour Party’s treatment and suspension of Jeremy Corbyn. We can attest to his outstanding support for the liberation of South Africa from apartheid, and his resolute stand against all forms of racism, discrimination, antisemitism, xenophobia, injustice and oppression of people, wherever such evils are manifested. We stand in solidarity with Jeremy Corbyn and join those in Britain calling for his reinstatement without delay.

We were soon joined by other South Africans, who — like us — had worked and organized for the African National Congress (ANC) and the Anti-Apartheid Movement (AAM), studied or lived in Britain during the struggle years, had many friends in the British labor movement, and had insight into, among other political and trade union formations, the Labour Party.

Here I refer to Essop and Aziz Pahad, Barney Pityana, Jeremy Cronin, Mandla Langa, Fazel Randera, Terry Bell, Mongane Wally Serote, Garth Strachan, Lawson Naidoo, Raymond Suttner, Eddie Webster, Horst Kleinschmidt, and Paula Ensor, among others — activists within South Africa and the international political arena to this day. Within a few days, our statement has been endorsed by two thousand concerned South Africans and others wishing to be associated with this initiative.

He has stood for decades in the cause of anti-racism, at times when it was far from popular or convenient. How many Labour MPs can match that type of record?

It is not difficult to understand why Jeremy Corbyn’s plight has affected us. Solidarity is a two-way street. Many of us experienced, in the most direct sense, his commitment to our struggle to topple the apartheid regime and are able to testify to that. We find it a matter of principle to stand by him, as his adversaries lash out for a range of shameful and downright reactionary reasons, intent on destroying or emasculating him.

For his thirty-seven years as an MP, Jeremy Corbyn has been an inspirational force not only for Britain, where he had attracted hundreds of thousands of youth into the Labour Party, but internationally, too. He has been one of the few leaders anywhere to not only dare talk about socialism, but to link it creatively to the issues that ordinary people are facing, and to inspire millions with hope. He has stood for decades in the cause of anti-racism, at times when it was far from popular or convenient. How many Labour MPs can match that type of record?

Additionally, he has been a champion of the antiwar movement, opposing the disastrous invasion of Iraq and exposing George W. Bush and Tony Blair’s warmongering duplicity. He is an implacable opponent of fascism at home and abroad, and a brave voice in upholding people’s rights to independence and sovereignty against imperialism. That is an outstanding legacy which we are proud to support without reservation.

These are clear reasons why we South Africans are so forthright in our support for Jeremy Corbyn and are prepared to raise our voices in his defense. But I raise another — in fact, one that motivated Jeremy Corbyn in all his years of dedicated activism on our behalf — and that is the knowledge that the fight for justice and the truth only prevails when sufficient numbers of people make their demands heard in words and action. The current crop of Labour leaders should pay heed to that lesson of history.

It is simply not true that Corbyn was incorrect when he argued that antisemitism in the party was overstated for political reasons. In a country where a Survation poll found that the public believed that 34 percent of Labour members have faced complaints of antisemitism — over three hundred times the actual number — how can it be denied that the public perception of what is happening in Labour has been skewed?

That is clear to many members, including Jewish members in Corbyn’s own constituency of Islington North who have defended his record. One such member, Lynne Segal, has written that:

Our own views as Jewish members [were] completely ignored. Right now, along with the many other Jewish activists I know in Islington North, I am simply devastated that this process has climaxed in the suspension of our cherished MP, and former leader.

Solidarity in support of a just cause is a powerful weapon. We join forces with those demanding that Keir Starmer lift this shameful suspension on an honest and decent man, a champion of the oppressed who has always been dedicated to Labour’s cause. We need to step up the pressure to achieve this end — and not only in Britain.

[Moderator's Note: This week the party's National Executive Committee reversed the suspension, but Corbyn has been denied his position in Parliament as party whip. More on these developments here.]

[Ronnie Kasrils is a former minister in the South African government. He was a member of the national executive of the African National Congress (ANC) and a founding member of uMkhonto we Sizwe.]

Jacobin's  new issue, “Failure Is an Option,” is out soon. We discuss why the United States’ institutional breakdown won’t stop after Trump leaves office and what can be done to improve things for working people. Get a discounted print subscription today!