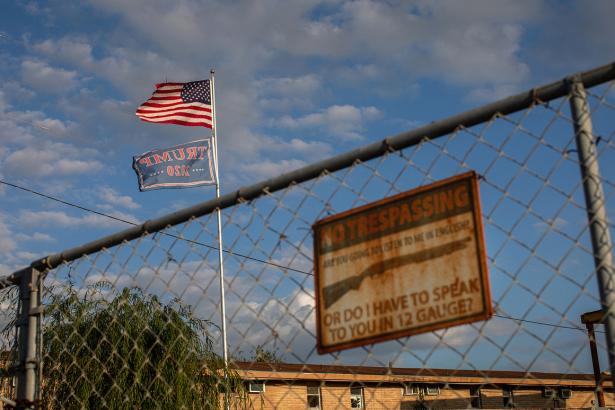 An American flag and a Trump 2020 flag fly on private property in Zapata, Tex., on Nov. 11, 2020. Credit, Tamir Kalifa for Politico Magazine

Who Took Down Trump?

States like Georgia don’t flip themselves. Meet some of the women whose grassroots organising enabled the Democratic victory.

When People of Color Vote for a Racist

Joe Biden still won strong majorities across all nonwhite demographics. Yet it’s worth asking how Trump managed to even marginally increase his appeal to nonwhite voters after four years of reckless and divisive politics.

Not Every Trump Voter

By Nesrine Malik
The Correspondent

There’s a rational Trump voter who we need to understand if we want to keep the forces of populism at bay.

Tejanos and the Caudillo

Ascribing Trump’s success in South Texas to his campaign winning more of “the Latino vote” makes the same mistake as the Democrats did in this election: Treating Latinos as a monolith.

Progressive activists reckon with red-baiting, the loss of Latino voters, and what it would take for Florida to go blue again.

By Dariusz Dziewanski
Africa is a Country

Young Africans are breathing life into Tupac’s memory, channeling his image and his music to be heard and seen in social spaces where they feel neither audible nor visible.

Another Loser Who Won’t Concede

A Republican who took 43% of the statewide vote against Washington Gov. Jay Inslee, has taken a page from President Donald Trump’s playbook by attempting to sow doubts about the election results and lobbing unsubstantiated claims of voter fraud.