1918 Germany Has a Warning for America

Donald Trump’s “Stop the Steal” campaign recalls one of the most disastrous political lies of the 20th century. 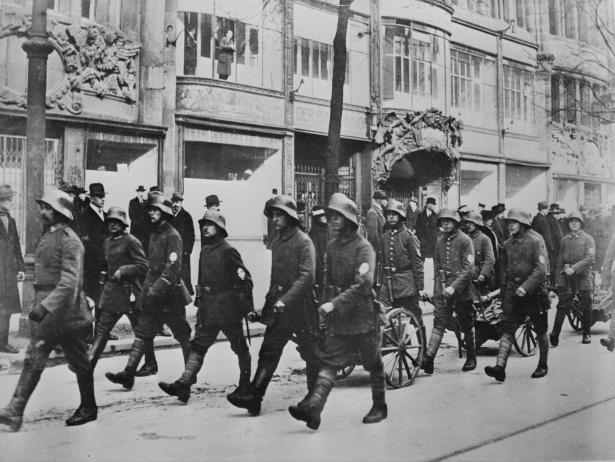 Defection of German marines in Berlin a few days before the November armistice in 1918. The crews of the battleships at Hambourg and Kiel refused to obey their leaders., Civilians and the territorial army joined them. This revolt marked the beginning of German decline. Photo 12/ Universal Images Group via Getty Images // New York Times

HAMBURG, Germany — It may well be that Germans have a special inclination to panic at specters from the past, and I admit that this alarmism annoys me at times. Yet watching President Trump’s “Stop the Steal” campaign since Election Day, I can’t help but see a parallel to one of the most dreadful episodes from Germany’s history.

One hundred years ago, amid the implosions of Imperial Germany, powerful conservatives who led the country into war refused to accept that they had lost. Their denial gave birth to arguably the most potent and disastrous political lie of the 20th century — the Dolchstosslegende, or stab-in-the-back myth.

Its core claim was that Imperial Germany never lost World War I. Defeat, its proponents said, was declared but not warranted. It was a conspiracy, a con, a capitulation — a grave betrayal that forever stained the nation. That the claim was palpably false didn’t matter. Among a sizable number of Germans, it stirred resentment, humiliation and anger. And the one figure who knew best how to exploit their frustration was Adolf Hitler.

Don’t get me wrong: This is not about comparing Mr. Trump to Hitler, which would be absurd. But the Dolchstosslegende provides a warning. It’s tempting to dismiss Mr. Trump’s irrational claim that the election was “rigged” as a laughable last convulsion of his reign or a cynical bid to heighten the market value for the TV personality he might once again intend to become, especially as he appears to be giving up on his effort to overturn the election result.

But that would be a grave error. Instead, the campaign should be seen as what it is: an attempt to elevate “They stole it” to the level of legend, perhaps seeding for the future social polarization and division on a scale America has never seen.

In 1918, Germany was staring at defeat. The entry of the United States into the war the year before, and a sequence of successful counterattacks by British and French forces, left German forces demoralized. Navy sailors went on strike. They had no appetite to be butchered in the hopeless yet supposedly holy mission of Kaiser Wilhelm II and the loyal aristocrats who made up the Supreme Army Command.

A starving population joined the strikes and demands for a republic grew. On Nov. 9, 1918, Wilhelm abdicated, and two days later the army leaders signed the armistice. It was too much to bear for many: Military officers, monarchists and right-wingers spread the myth that if it had not been for political sabotage by Social Democrats and Jews back home, the army would never have had to give in.

The deceit found willing supporters. “Im Felde unbesiegt” — “undefeated on the battlefield” — was the slogan with which returning soldiers were greeted. Newspapers and postcards depicted German soldiers being stabbed in the back by either evil figures carrying the red flag of socialism or grossly caricatured Jews.

By the time of the Treaty of Versailles the following year, the myth was already well established. The harsh conditions imposed by the Allies, including painful reparation payments, burnished the sense of betrayal. It was especially incomprehensible that Germany, in just a couple of years, had gone from one of the world’s most respected nations to its biggest loser.

The startling aspect about the Dolchstosslegende is this: It did not grow weaker after 1918 but stronger. In the face of humiliation and unable or unwilling to cope with the truth, many Germans embarked on a disastrous self-delusion: The nation had been betrayed, but its honor and greatness could never be lost. And those without a sense of national duty and righteousness — the left and even the elected government of the new republic — could never be legitimate custodians of the country.

In this way, the myth was not just the sharp wedge that drove the Weimar Republic apart. It was also at the heart of Nazi propaganda, and instrumental in justifying violence against opponents. The key to Hitler’s success was that, by 1933, a considerable part of the German electorate had put the ideas embodied in the myth — honor, greatness, national pride — above democracy.

The Germans were so worn down by the lost war, unemployment and international humiliation that they fell prey to the promises of a “Führer” who cracked down hard on anyone perceived as “traitors,” leftists and Jews above all. The stab-in-the-back myth was central to it all. When Hitler became chancellor on Jan. 30, 1933, the Nazi newspaper Völkischer Beobachter wrote that “irrepressible pride goes through the millions” who fought so long to “undo the shame of 9 November 1918.”

Germany’s first democracy fell. Without a basic consensus built on a shared reality, society split into groups of ardent, uncompromising partisans. And in an atmosphere of mistrust and paranoia, the notion that dissenters were threats to the nation steadily took hold.

Alarmingly, that seems to be exactly what is happening in the United States today. According to the Pew Research Center, 89 percent of Trump supporters believe that a Joe Biden presidency would do “lasting harm to the U.S.,” while 90 percent of Biden supporters think the reverse. And while the question of which news media to trust has long split America, now even the largely unmoderated Twitter is regarded as partisan. Since the election, millions of Trump supporters have installed the alternative social media app Parler. Filter bubbles are turning into filter networks.

In such a landscape of social fragmentation, Mr. Trump’s baseless accusations about electoral fraud could do serious harm. A staggering 88 percent of Trump voters believe that the election result is illegitimate, according to a YouGov poll. A myth of betrayal and injustice is well underway.

It took another war and decades of reappraisal for the Dolchstosslegende to be exposed as a disastrous, fatal fallacy. If it has any worth today, it is in the lessons it can teach other nations. First among them: Beware the beginnings.

[Jochen Bittner (@JochenBittner) is a co-head of the debate section for the weekly newspaper Die Zeit and a contributing opinion writer.]