Factory Farms Are Poisoning Rural Communities. Will Biden Take on This Crisis?

The upcoming Biden administration must take action to protect the air, water, land and health of rural communities overrun and bankrupted by factory farms. Joe Biden’s plan for rural America does not mention any kind of comprehensive farm reform. 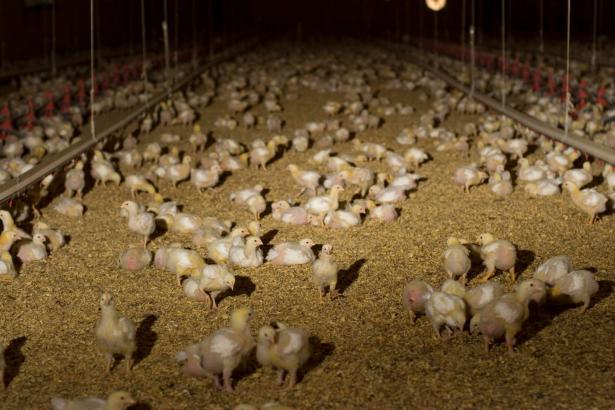 In spite of the low marks Joe Biden earned from progressive groups during the primaries — including an “F” from the Sunrise Movement and a “C+” from the Center for Biological Diversity — the Biden campaign closed out the presidential race on climate-high notes, running ads featuring farmers impacted by climate change in Michigan and Arizona.

To deliver on that campaign rhetoric, public health researchers and organizers working with agricultural communities say the upcoming Biden administration must take action to protect the air, water, land and health of rural communities overrun and bankrupted by factory farms. In addition to generating an estimated 10 to 15 percent of global greenhouse gas emissions, industrial agriculture produces pollutants that disproportionately sicken low-income communities and communities of color by exposing them to toxic chemicals like ammonia and nitrate.

Maria Payan is a Delaware resident who used to live in Pennsylvania’s York County. After the farmers across the street sold their property to an industrial poultry operation, her family began to get sick. “At one point, I was pulling my son out of the bathtub and rushing him to emergency care, because he would have blisters all over his body when he got out of the water,” she told Truthout. And that wasn’t all. Her son regularly threw up when he got off the school bus and took a breath of air, which smelled of chicken dung. Payan’s family decided to move away, but it was all but impossible to sell the family home. “Who wants to move next to an area where you can’t even go outside and breathe without vomiting?”

Payan has since been working with rural communities living near what are known as concentrated animal feeding operations (CAFOs) like the one that sprang up near her old house, collecting health information and organizing to prevent more CAFOs from being permitted and built.

CAFOs are industrial operations in which over 1,000 cattle, pigs or chickens are confined for more than 45 consecutive days with no access to pasture. The operations tend to discharge waste into a ditch, stream or other waterway. CAFOs take root once a company sets up an industrial slaughterhouse, after which sprawling sheds spring up throughout the area to supply animals to the slaughterhouse. In addition to greenhouse gases generated from animal waste, industrial operations like CAFOs rely heavily on pesticides and fertilizers derived from fossil fuels. As InsideClimate News reports, business-as-usual agriculture is on track to emit half of the global carbon budget under a scenario in which world leaders agree to curb warming to 2 degrees Celsius by 2050.

As CAFO operations spread, they destroy the health and social fabric of a community, Payan says. On a single street in Millsboro, Delaware — where poultry producer Mountaire Farms is facing a series of lawsuits related to nitrate pollution — Payan describes meeting a woman with small tumors covering her entire body, a neighbor whose son died of an asthma attack and a resident who had just gotten an amputation.

“Who wants to move next to an area where you can’t even go outside and breathe without vomiting?”

The illnesses may be linked to nitrate pollution. Nitrate is an ion present in synthetic and manure-based fertilizers, which, when ingested, can lead to oxygen deprivation and the death of swaths of tissue. In 1962, the U.S. Public Health Service established a maximum safe drinking water threshold of 10 milligrams per liter (mg/L), based on research linking the toxin to what’s known as blue baby syndrome. The Environmental Protection Agency (EPA) adopted the 10 mg/L standard for public water supply in 1992 and continues to regulate it under the Safe Drinking Water Act. But the protections don’t extend to private wells — which 43 million people in the U.S. rely on, according to the United States Geological Survey. And the EPA has never updated its “safe limit.” The EPA scrapped plans to review the maximum safe standard in 2017, classifying the contaminants as “not appropriate for revision at this time.”

And in addition to blue baby syndrome, public health research has since connected nitrate contamination to a trove of other health conditions, including cancers and developmental disabilities, and at levels much lower than 10 mg/L. Preliminary research co-authored by University of Maryland School of Public Health professor Sacoby Wilson suggests a connection between CAFOs and the incidence of special education services in Delaware, though the study has yet to be peer reviewed. Students in census tracts where poultry CAFOs are based and where nitrate levels in the water exceed 5mg/L, the initial findings suggest, have tended to score lower on math and English proficiency tests.

As CAFO operations spread, they destroy the health and social fabric of a community.

Katlyn Schmitt is a policy analyst at the Center for Progressive Reform and the co-author of another new report on how nitrate contamination stemming from CAFOs could be harming residents on Maryland’s Lower Eastern Shore. Nitrate is particularly damaging to community health because as it flows out of household taps, it is imperceivable. “You can’t smell it, you can’t see it in any way, shape or form,” Schmitt tells Truthout. Nor does it disappear after boiling water.

Over the last decade, Maryland has been home to a poultry boom, the report details. Hundreds of CAFOs were brought online between 2014 and 2017, such that there are 50 chickens per Maryland resident, or 240 chickens per resident of the Lower Eastern Shore, according to Schmitt’s estimations. “That means Maryland is producing about 900 million pounds of manure every single year and there’s just too much to sustainably manage,” she says. Nitrate pollution from chickens raised for meat production increased by almost 30 percent in Maryland waterways over a similar time period. And while some states offer protections, like requiring property owners to test for nitrates every five years and to inform their tenants of the results, that’s not the case in Maryland, which the report ranked as among the five states with the worst drinking water protections for private wells. Records that Schmitt and her colleagues received from Worcester County referred to one sample containing 136 mg/L of nitrate — well over 10 times the EPA’s maximum contaminant level. Data was not available from many of the service areas where researchers sought information. Maryland is one of nine states that does not provide online access to data on private well testing.

CAFOs have continued to expand under the Trump administration, most recently benefiting from regulatory rollbacks, including a final rule submitted by the Council on Environmental Quality that exempts CAFOs receiving financing from the federal government from compliance with National Environmental Policy Act (NEPA) review. For residents living near industrial farming operations, where air quality can be as poor as in some highly polluted cities, that’s an egregious change.

Monica Brooks lives in Maryland’s Wicomico County, which has 113 CAFOs — more than any other county in the state. Brooks is the founder of Concerned Citizens Against CAFOs, a community group she launched after finding out that a 13-barn CAFO operation was planned to go up about half a mile from her house. Speaking on a Food & Water Watch webinar in May, Brooks explained that local officials were not receptive to her concerns, brushing off the kinds of daily health effects residents who live near CAFOs report, like plugged ears and burning eyes. Brooks likens the CAFO model to a form of indentured servitude, due to meat companies’ tendency to externalize risk to contract farmers and gross billions of dollars while farmers go into debt.

CAFOs have continued to expand under the Trump administration, most recently benefiting from regulatory rollbacks.

Under the CAFO model, the Associated Press reports, poultry firms strike deals with farmers on a contract basis, requiring farmers to take on significant financial risk, often seeking loans to build barns according to company requirements. The companies provide animal feed and chicks, often financed by government subsidies. In 2017, former chicken farmers in five states filed a lawsuit accusing poultry companies of colluding to fix the prices they pay contract farmers, who tend to work 14- to-16-hour days and earn $12,000 to $40,000 annually. The multinational meat company Tyson Foods made 42 billion in revenue in 2019.

In 2018, after months spent heckling city council and other elected leaders, Brooks and other activists succeeded in pushing the owners of what would have been a 13-barn CAFO operation under contract with Tyson to scrap its plans and sell the plot of land to small-scale farmers intending to grow sod and tomatoes. The local newspaper, Delmarva Now attributed the project’s termination to “historic grassroots backlash.”

Now, with NEPA gutted, communities could face difficulties voicing concerns about CAFOs. A coalition of environmental organizations in September filed a suit in District Court claiming that the Trump administration’s NEPA rollbacks violate two bedrock environmental laws and deprive residents opposed to CAFO operations with the chance to provide public input and the opportunity to bring polluters to court.

“CAFOs and the slaughterhouses they supply, which continue to expand throughout the United States, cause and exacerbate climate change and harm rural community and economic health, drinking water quality and quantity, air quality, endangered species, the confined animals themselves, and other aspects of the human environment,” the suit alleges. “They also harm quality of life and depress property values of those living in close proximity to these facilities.”

In October, the Trump administration filed a single-paragraph motion to dismiss the complaint on the grounds that the plaintiffs “lack standing and their claims are not ripe for judicial review.”

Joe Biden’s plan for rural America does not mention any kind of comprehensive farm reform.

As The Phoenix reports, in its first 100 days, the Biden administration could reverse Trump-era rollbacks like this. Environmental advocates also want legislators to pass the Farm System Reform Act that would put a moratorium on CAFOs, thereby curbing industrial agriculture’s contributions to climate change and pressing pause on nitrate pollution, which is expensive to remove. “Good environmental policy is always good economic policy,” Payan said. As Civil Eats reports, the American Public Health Association supports a CAFO moratorium, and a Johns Hopkins University poll suggests voters might also lean in favor of a ban. Joe Biden’s plan for rural America does not mention the proposed legislation, nor any kind of comprehensive farm reform.

It remains unclear how legislative proposals overhauling industrial agriculture or taking economy-wide action on climate might move through a Republican-controlled Senate. But as Brooks has suggested, maybe lawmakers should spend time visiting communities where slaughterhouses have sprung up. “Take five minutes outside of a CAFO and see how you do,” she said.

Note: This article was updated to offer more details on Sacoby Wilson’s research into CAFOs and to add an additional quotation from Wilson.