"The Republican Party has made clear that they are not prepared to stand up for the American people and address the many crises facing working families today. We can get to work without them."

With Senate Budget Committee Chairman Bernie Sanders leading the push for an ambitious package, Democrats in the upper chamber are reportedly considering a $6 trillion infrastructure bill as bipartisan negotiations continue to produce proposals that fall short of what experts say is needed to combat the climate emergency and rebuild the nation's crumbling roads, bridges, and water systems.

"The bottom line is there are a lot of needs facing this country. Now is the time to address those needs, and it has to be paid for in a progressive way, given the fact that we have massive income and wealth inequality in America."
—Sen. Bernie Sanders

Politico reported Thursday morning that "Senate Democrats are weighing spending as much as $6 trillion on their own infrastructure package if the chamber's bipartisan talks fail."

Under the tentative plan, which would be pushed through the arcane and restrictive budget reconciliation process, "half of the proposed Democrats-only alternative would be paid for," according to Politico. As head of the Senate's budget panel, Sanders has significant influence over the size and scope of the emerging reconciliation bill, which would need just a simple-majority vote to pass.

The $6 trillion plan would go well beyond the roughly $4 trillion in spending that President Joe Biden proposed in his two-pronged infrastructure and safety-net package, which consists of the American Jobs Plan and the American Families Plan.

The Washington Post reported Thursday that the $6 trillion plan is expected to include an expansion of Medicare, a top progressive priority that Biden left out of his original American Families Plan. The emerging proposal would lower the Medicare eligibility age from 65 to 60—a move that would open the healthcare program to 23 million people—and expand benefits to include dental, vision, and hearing.

Earlier this week, Sanders (I-Vt.) told reporters he "wouldn't vote for" the infrastructure framework that the bipartisan group of 20 senators is currently hashing out behind closed doors. The group is led by Sens. Kyrsten Sinema (D-Ariz.) and Rob Portman (R-Ohio).

"The bottom line is there are a lot of needs facing this country," said Sanders. "Now is the time to address those needs, and it has to be paid for in a progressive way, given the fact that we have massive income and wealth inequality in America." 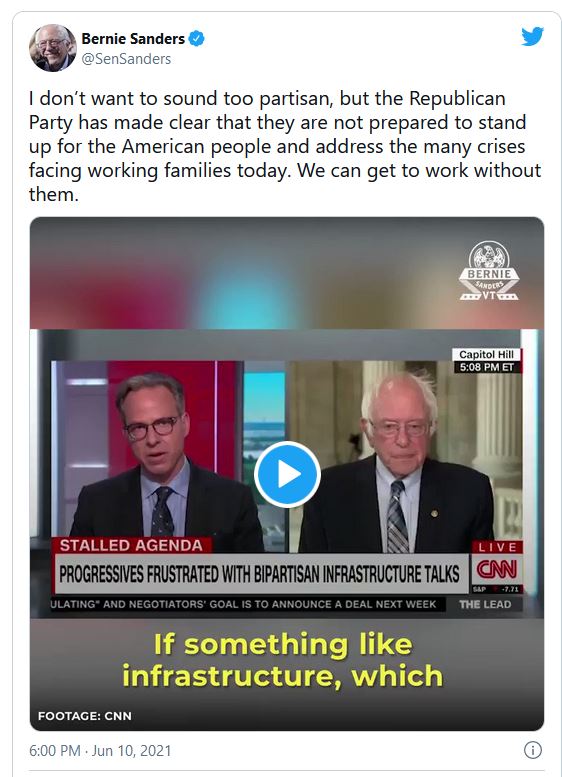 The bipartisan package, the details of which began to emerge (pdf) late Wednesday night, calls for just $579 billion in new spending, a figure that a number of Democratic lawmakers in both the House and Senate have rejected as badly inadequate to address the country's dire infrastructure needs and make necessary investments in green energy.

Analysts have also raised alarm over how the bipartisan group is proposing to finance their package as Republican lawmakers refuse to accept any changes to the 2017 GOP tax cuts for the wealthy and large corporations.

A two-page document (pdf) currently circulating in the Senate lists 11 potential pay-fors, including a reduction in the massive IRS tax gap and "asset recycling."

As The American Prospect's David Dayen noted on Twitter, the latter proposal "is a concept from Australia" that entails "funding infrastructure by selling it to private companies."

"You cannot talk about the relative worthiness of this effort without talking about how it would sell the common assets of America to the highest bidder," Dayen wrote.

"This is a matter of priorities—and Democrats' priorities must be to support working people, create jobs, and stop the impending climate crisis that's destroying our communities," said Maunus. "If Democrats fail to do so, we not only risk our futures, but will jeopardize any electoral chances in 2022 and beyond."