Most Americans still think positively of capitalism, but that’s beginning to change among young adults...If capitalism has begun to lose its shine, what solutions do people prefer? Socialism, for one. 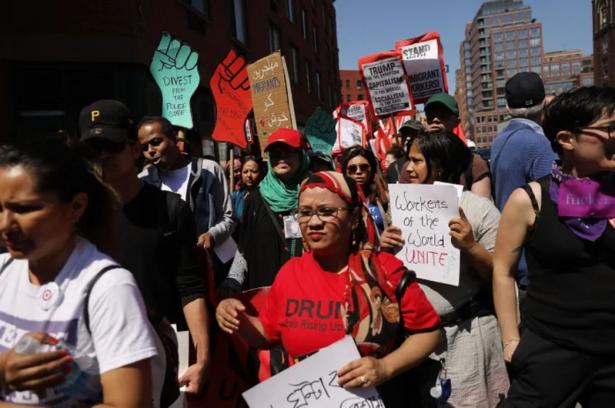 If capitalism has begun to lose its shine, what solutions do people prefer? Socialism, for one. While positive views of socialism have slipped slightly among adults under 35 over the last two years, falling from 55 to 51 percent, it’s picked up some support from older adults and especially people of color. Axios reports that 60 percent of Black Americans view socialism positively, as do 45 percent of women, and even 33 percent of non-white Republicans. “Those numbers have grown over the past two years from 53 percent, 41 percent, and 27 percent respectively,” Felix Salmon writes. Capitalism is still more popular than socialism nationally, but there’s not much evidence that Americans categorically despise the anti-capitalist ideology any more.

The Axios/Momentive poll didn’t measure attitudes toward common socialist ideas though. Asking the public about the wealth gap is not quite the same as asking them if they support redistribution of wealth to close it. Nevertheless, the poll did indicate some broad support for a form of social democracy. 66 percent said the federal government “should pursue policies that try to reduce the gap between the wealthy and the less well-off in America,” which tracks with earlier, similar polls. In January 2020, the Pew Research Center found that most Americans believed there was too much economic inequality in the U.S., though only 42 percent said it should be a top priority for the federal government. The same poll, however, did show high rates of support for another form of government intervention: 72 percent said its top priority should be making health care more affordable for the public.

Support for other, broadly progressive policy solutions remain high. In an April Hill-HarrisX poll, 56 percent of registered voters “said billionaires paying a wealth tax is part of the solution to wealth inequality,” a figure consistent with previous poll results. Another March Morning Consult/Politico poll found that around seven in ten voters support a public health insurance option, and 55 percent support Medicare for All. Considered together, these numbers tell a political story. As the pandemic reordered American life and the economy along with it, Americans have become more critical of the dominant economic order. That creates an opening for Democrats — if they’re savvy enough to take advantage of it.

Most Democratic electeds remain eager to differentiate themselves from their socialist colleagues, who are themselves a small faction of the party’s presence in Congress. Should public opinion hold, however, that faction is likely to grow with time. That doesn’t spell doom for the party’s overall electoral chances, either. Democrats should ask themselves which is the more damaging possibility: A failure to condemn socialism, or a failure to critique capitalism? Given the numbers, the answer is clearly the latter, at least among the demographic groups Democrats need to inspire in order to keep winning elections.

Of course, Republicans will conflate milquetoast versions of liberalism with socialism as they successfully did during the last election in Florida among Latino voters. As a result, Democrats should have learned there’s no effective way to dodge a smear campaign except to counter it with a more effective message. Perhaps they could even make inroads with non-white Republicans. Party moderates may dislike it, but socialism has a growing constituency: In Buffalo, voters just elected socialist nurse India Walton in an upset over the Democratic incumbent, Byron Brown.

Should Democrats mount a cohesive critique of capitalism, they’ll meet many Americans where they are. That’s sensible politics, the key to a winning strategy. For the last year, Americans have lost jobs, stability, and in many cases, hope. A crisis as dramatic as COVID-19 should expand the party’s definition of what’s possible. Voters are eager for something new. Someone will provide it. That person could be a socialist or social democrat, or they could be a Republican cunning enough to wrap conservative politics in a populist-sounding message. Democrats will have to conquer their hostility to the former in order to prepare for the latter. There is a vanishing constituency for the status quo.

[Sarah Jones is a staff writer for New York magazine, where she covers politics and culture. She is originally from Washington County, Virginia.]