It's hard to say a story is a blistering indictment of privilege without making it seem medicinal, which The White Lotus is not. 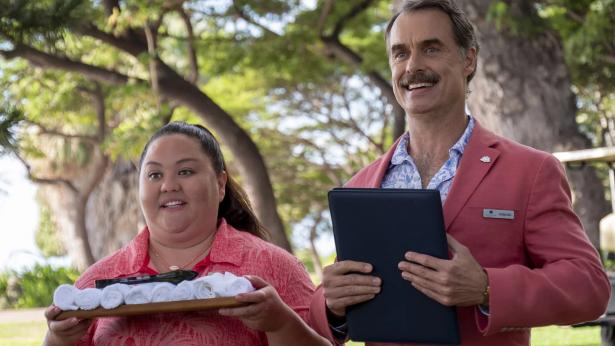 A man and a woman in bright coral — her polo shirt perfectly matches the shade of his jacket; he has a clipboard and she has a tray of fresh towels — stand a bit anxiously near a beautiful beach, as if they're waiting to be rewarded, or punished. He gives her advice, including this:

The goal is to create for the guests an overall impression of vagueness that can be very satisfying, where they get everything they want, but they don't even know what they want or what day it is. Or where they are, or who we are, or what the f*** is going on.

That's how we meet manager Armond (Murray Bartlett) and first-day trainee Lani (Jolene Purdy) as he explains the atmosphere they're going for as they wait for the VIP arrivals at a Hawaiian resort called The White Lotus. The staff members are meant to barely exist to their guests except as a nondescript blur of impeccable service, he explains. She should try to be "generic."

The week those VIP guests will spend at The White Lotus is the subject of the outstanding new six-episode limited series of the same name from creator Mike White (Enlightened, School of Rock) that premieres Sunday night on HBO. And in that short statement, Armond lays out how the wealthy guests see not only their time at the resort, but their time on Earth: They do not overthink who they are or where they are, as long as they are getting what they want.

We follow three guest parties over this chaotic week. The first is the Mossbachers, a family that includes tech executive Nicole (Connie Britton) and her husband Mark (Steve Zahn), their college sophomore daughter Olivia (Sydney Sweeney) and their 16-year-old son Quinn (Fred Hechinger), plus Olivia's friend Paula (Brittany O'Grady), implicitly brought along as a guest to keep Olivia from griping the entire time. The second is Shane and Rachel Patton (Jake Lacy and Alexandra Daddario), honeymooners on whose marriage license the ink is barely dry. And the third is Tanya McQuoid (Jennifer Coolidge), a wealthy single woman who arrives in desperate need of a massage, transparently troubled, and intent on finding a place to scatter her mother's ashes. 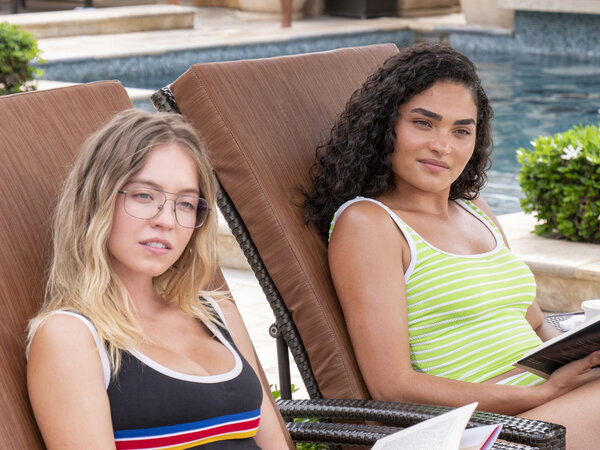 Sydney Sweeney and Brittany O'Grady play best friends who are not very nice in The White Lotus.

In addition to Armond, we will get to know another employee of the White Lotus very well: Belinda (Natasha Rothwell), the manager of the spa, who specializes in pampering guests who are almost entirely white and rich. She treats them not only to spa experiences but to healing of other kinds, including patient and intimate advice.

It is hard to overstate how piercing a satire White has written here, not about the flatly awful villains you find on many "get a load of these rich jerks" shows, but about the failures of people whose humanity, in some cases, he leaves expansive space to explore.

When your focus is on the two Pattons together, for instance, theirs seems to be the story of an insufferable rich man who has married a smart and kind young woman who is realizing too late that her husband is a spoiled bully. But the Pattons also interact with Armond in particular, and when you see them in that context, her relative kindness seems irrelevant. They act in that story as a privileged and bullying unit, both benefiting from how Shane uses power and money, whether Rachel privately objects or not.

Similarly, the Mossbachers first seem to be a relatively benign version of the very rich family, moving through the world with appropriate "thank you" and "it's lovely to see you" gesturing, frustrated by their withdrawn son and their nasty daughter. (Sydney Sweeney, who also played the gentle and vulnerable Eden in The Handmaid's Tale, pivots here to one of the most convincingly hateful portrayals of a rich young brat to come along in quite a while.) But there's a sense of culpability for Olivia that hangs around Nicole and Mark, because they have built the person she's becoming, even as they ineffectually roll their eyes and lecture her. Whatever their conscious positions about how a person should behave, they have raised one who meets and treats the rest of the world the way Olivia does, and it indicts them.

And Tanya — well, Tanya is needy and in pain, and Belinda is a helper by nature and by profession. Their relationship is one of a client and a service provider, but it takes on additional stakes as Tanya becomes more attached to and impressed by Belinda, who remains guarded on the other side of her bright smile as Tanya insistently blurs the boundaries between them.

The work that Coolidge and Rothwell both do here is so subtle, and so emotionally complicated, that when you reach the end of the six-episode story, it has the sense of inevitability that comes from fully and richly — and fairly — considering who these people are, and building their story not around tropes, but around that immovable truth. 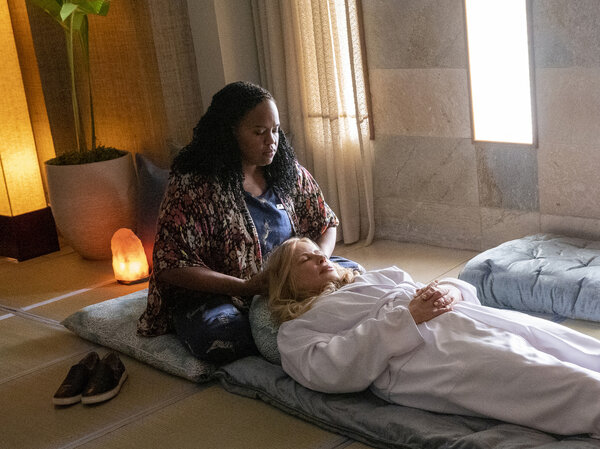 Natasha Rothwell and Jennifer Coolidge play a wary spa manager and her client in The White Lotus.

Race certainly plays a marked role, though one that's mostly unspoken, in the power structure at the White Lotus. The fact that Belinda is Black and Tanya is white is foundational to the way they interact at every level, and to how they ultimately view each other. Paula, who is the only guest of color we meet, is also the only one of the Mossbacher party to take any interest in the staff or object to the way Hawaiian culture is appropriated by the resort as entertainment or decor. And much of the staff seems (logically enough) to be native Hawaiian and surrounded by white guests, which comes into play in one story arc.

The Costs Of Not Noticing

It wouldn't be fair to share the ways in which Armond fits into the stories of each of his guests, except to say that he has flaws just like his guests do, but he does not have their money or status. Even as a manager, he knows that he is largely at the mercy of their whims, their threats, and the outside frustrations they may take out on him. As he explains to Lani, guests are to best treated like little children who just want to feel special, and who get angry when anyone says no. But in this case, of course, those tantrums can ruin the lives of others. Bartlett has a lot to do in this series playing Armond, as what first seems like officious and bottomless good cheer takes on other shapes, and he's exceptional at making the character sympathetic, aggravating, appealing and exhausting.

The White Lotus is in large part a story of the costs of malign inattention, as becomes clear in the first episode. Within that hour, a character is driven to wonder how they could have been so focused on other things that the most obvious features of another person's life were obscured. And over and over, the guests at the resort demonstrate that their interest in the world is narrow and self-regarding, and that they lack the humane peripheral vision that would lead them to treat other people better than this. This, Mike White suggests, is what very rich people use money for: to get what they want from people they don't have to think about at all. To ignore the inner lives of others, then, is a primary manifestation of privilege.

It's hard to say a story is a blistering indictment of privilege without making it seem medicinal, which The White Lotus is not.

It's sharply funny, gorgeous to look at in corals and blue-greens, and masterfully scored with a combination of original music by Cristobal Tapia de Veer and well-chosen songs. Those songs are richly varied, including Hawaiian music like "Hawai'i Au" by The Sunday Manoa as well as pieces, like "On A Coconut Island" by Louis Armstrong and the Polynesians, that sound like the established pop-cultural island paradise, the one that exists as such in the imaginations of tourists. 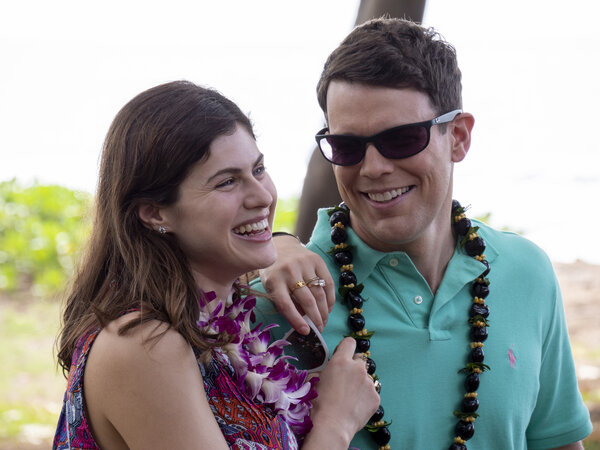 Alexandra Daddario and Jake Lacy in The White Lotus.

The show is clever about details — while Olivia and Paula arrive as best friends, they are not the same: Olivia shows up in a college shirt, while Paula's says "POST HOPE." And a recurring deployment of water and ocean imagery, particularly in the story of the Mossbachers' son Quinn, provides a tie back to the fact that this is a place that was beautiful and magical long before anyone built luxury suites there, and that many of the resort guests are determined to miss its greatest pleasures.

There could hardly be a better moment for this series, filmed during the pandemic, to arrive. Has there ever been a worse year for so many workers? Has there ever been a time when they risked more just to get other people's groceries, clothes, booze, books, and sourdough starters from Point A to Point B in exchange for crumbs? Plus doctors and nurses, public health experts, scientists, teachers, so many people just wanted their work to be acknowledged as the labor of real, often struggling people.

The White Lotus is sometimes exactly what its premise suggests: a very funny show about rich jerks (Jake Lacy is so effective as Shane that you may never again see him as you did as a nice guy on shows like The Office). But where it shines most is as a story about who has to care how other people feel and who doesn't, and about how often that distinction comes down to money.

Watching The White Lotus is like biting down on a very fresh lemon, when you get the tartness, the sweetness, the vibrancy, and the cool acid on your tongue. It's certainly memorable, and it will wake you up. But there's a bitterness that rides on its brightness, and it lingers.