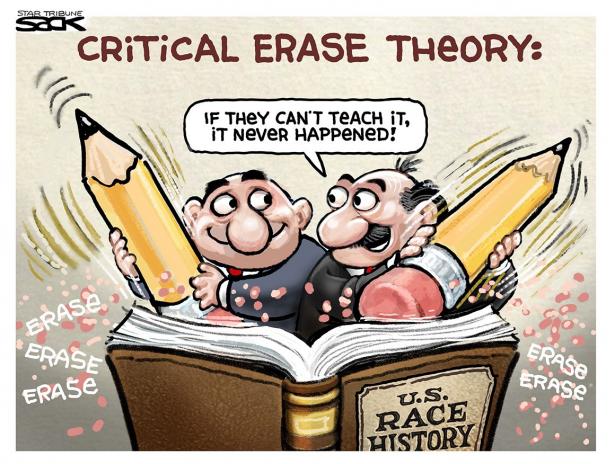 By Esther Wang
The New Republic

Classes are being canceled, and teachers are being fired, as “anti–critical race theory” fights are coming to a head in Republican states. But the viral school board videos are only part of the story.

Gentrification and a Marching Band

The Brooklyn United Marching Band has had to field a rash of new complaints about the band practicing under the LIRR on Atlantic and Kingston Avenues, with the complaints raising new questions for them about gentrification in the area.

The conservative movement has been trying to use Ashli Babbitt’s death to recast the insurrection as a case of innocents being killed. The fringe right has molded a narrative to incorporate the explicit use of her race. Racist influencers emphasized that she was killed by a black man, explicitly mixing her supposed martyrdom with the race of the person that shot her.

If there was ever an indictment of the legal system’s inability to provide women who are raped, harassed, and abused by men a clear roadmap to justice, here it is. If there ever was an argument to be made for “canceling” abusive, assaulting, raping men, shamed by society and ostracized by all, here it is.

Murrieta Valley High School fired Michael Henderson, head coach of cheer and stunt program, after he served three years in that job. The coach believes he was fired because he is gay. He filed a wrongful termination lawsuit alleging that the process leading to his dismissal was “flawed.” Many of his student athletes and their families agreed.

Racism and the Anti-Vaxx Movement

By Paula Larsson
The Conversation

While many accuse anti-vaxxers of a selfish disdain for the health and safety of others, there is a underlying aspect of these movements that needs to be more widely recognized. Vaccine resistance movements have always been led by white, middle-class voices and promoted by structures of racial inequality.

Keith McCoy, a lobbyist and Exxon’s director of federal relations, said the company intentionally tried to manipulate the public into not understanding the science of climate change, often hiding its role by using third-party organizations.

Why Solidarity Activists Call Out Ortega and Murillo

I had been dismayed about the situation in Nicaragua ever since the deadly crackdown on demonstrations and the arrests student and union leaders in 2018. But it was the arrest last month of the revolutionary leaders, especially Dora Maria Tellez, that drove to me to angry despair.

Chinese immigrants in the US have become a rising force in conservative politics. Many are propelled to the right-wing political  sphere by anti-communism and opposition to affirmative action. Some believed that the Trump administration's hardline policy on China would apply pressure on Beijing and eventually lead to the communist regime's downfall.

By Gary Baum and Katie Kilkenny
The Hollywood Reporter

With supporters ranging from assistants to power players like Adam McKay, the industry's Democratic Socialists are demanding a fair share for workers (but aren’t necessarily coming for your house in the hills).