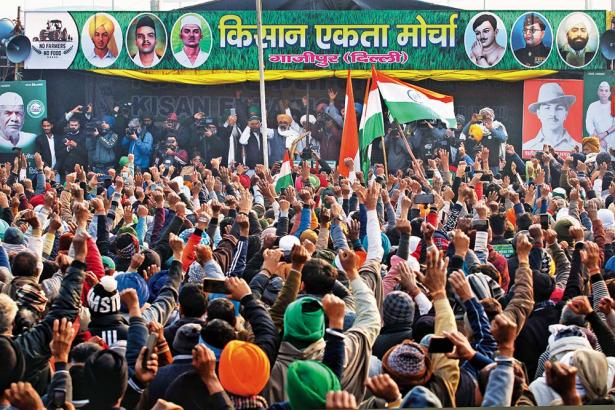 Indian farmers demanding the repeal of laws passed by Parliament shout slogans as they meet in Muzaffarnagar on 5 September. Credit, Suresh K. Pandey

Farmers unions said 10 lakh (1 million) arrived in the city of Muzaffarnagar in Uttar Pradesh over 24 hours, for a “historic” gathering organized by the Samyukt Kisan Morcha (SKM), an umbrella body of 40 farmer organisations. “We will not let BJP win the upcoming elections,” said an SKM statement. Farmers unions called for a “Bharat bandh” (general strike) on September 27.

__________
Nicaragua Under the Ortega/Murillo Government

Over the course of modern history, social movements have managed, to a remarkable degree, to form global networks of activists who have transcended nationalism in their ideas and actions.

The balance of forces in Perú is unlikely to produce as progressive a charter as either Ecuador or Bolivia. But in the absence of such a thoroughgoing democratic renewal, a neoliberal restoration on the old terms doesn’t seem likely either.

The Makana Citizens’ Front aims to unite communities, listen to their grievances and make the dysfunctional municipality in Makhanda accountable to residents.

We need to leave aside the obvious international constraints, the geopolitical limitations, and the obligations, or the not-so-obvious lack of left opposition from the outside and the ineffective opposition from within. Taking a serious look to the Southern European experience, and especially that of SYRIZA, can provide us with useful pointers in rethinking socialist organization.

One day after the Islamic Republic of Iran’s presidential election, a wave of labor strikes demanding higher wages, job security and better safety and health conditions began in Iran’s oil, gas and petrochemical industry. The strikes, due to their size, geographical spread and relative organizational strength, have acquired a political edge.

The EU has invested billions in Israeli arms companies to further militarize its border agency Frontex. Building a global antimilitarist movement is essential.

Lukács’s investigations remained firmly within the Soviet Union system, proposing to reform rather than to revolutionize it, but certainly not abandon it. For Luxemburg, without the support of the majority, any political power already gained must be relinquished and a new attempt made.