Trump, Texas, and the MAGA Drive for Power

When we demonstrate on the ground that radicals are the most reliable and effective fighters against the mortal threat of Trumpism, we maximize our chances of gaining support for our perspective and our organizations. 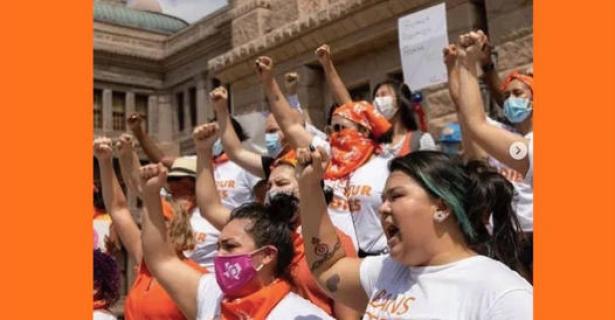 Women staged performance protests around Texas and around the country at noon on Sept. 1, the day that Texas SB8 took effect. The bill amounts to a near-total abortion ban, enforced by vigilante justice. , Trust Respect Access Coalition

Donald Trump dispensed with even the pretense of paying tribute to workers on Labor Day. Instead his three word Labor Day Statement, blasted out to his supporters everywhere via the right-wing media machine, was blunt about his political priorities:

The non-Trump media says the statement is ‘bizarre,” since it doesn’t “clarify what exactly should be fixed.” But everyone in the MAGA world got the point loud and clear: Our guy won the 2020 election. We need to “Stop the Steal” and get him back in the White House. No need to offer a policy agenda or beat around the bush. All that matters is gaining absolute political power.

In pondering the significance of this, it would be wise for all of us to take Maya Angelou’s advice: “When someone shows you who they are, believe them the first time.”

After all, today’s Trumpist bloc, a.k.a. MAGA Faction, a.k.a. Jim Crow Faction, is not a new phenomenon in the United States. Michael Podhorzer’s latest “Weekend Reading” lays it out:

“The MAGA Faction has never accepted liberal democracy. The Faction’s vigilante ideology is theocratic – the state exists to preserve privilege in a western, patriarchal interpretation of biblically ordained racial and social orders.  When the state fails to enforce those moral absolutes, it is the natural right of citizens to enforce those eternal laws. It was ever thus – from slave patrols to the KKK to January 6 and now TX SB8, the Faction glorifies vigilante justice.”

This faction is ecstatic over Republicans’ success at blocking any congressional action to protect voting rights, and the Supreme Court’s refusal to stay the implementation of Texas’ new law, SB8, essentially nullifying Roe v. Wade. The January-6-was-a-rehearsal-for-more-successful-coups-to-come bloc smells blood in the water and is moving fast on all fronts, including:

* Passing vigilante legislation. The passage of SB8 is sparking the flood of copycat legislation in other states. The law in the first place is a brutal assault on women’s rights. But it is also a push-the-envelope effort to remove all checks on right-wing vigilante justice.  It offers financial incentives for suppressing women’s rights, thus adding battalions of  bounty hunters to the MAGA Faction’s existing contingent of armed white supremacists militias. (See Ken and Karen Laws and the Institutionalization of Anti-Democratic Politics for an examination of this topic in more depth.)

* Seizing control of vote counting. The U.S. electoral system is structured in favor of disproportionate and anti-democratic white political power via the Electoral College and the Senate. The GOP’s voter suppression and gerrymandering crusades – enabled by right-wing control of the Supreme Court – has further skewed the electoral playing field. But even that is insufficient for a MAGA Faction panicked by the rising proportion of peoples of color in the U.S. and the unpopularity of right-wing politics among youth.

So the Trumpists are moving to seize control of not just who votes but of who counts the votes by working overtime to get federal courts to interpret the Constitution as endorsing the “Independent State Legislature Doctrine.” This doctrine would allow gerrymandered state legislatures controlled by the GOP to decide how to allocate the state’s Electoral Votes in a presidential election independent of the vote of that state’s electorate. The result could be that a Republican presidential nominee could lose both the nationwide popular vote and the popular vote in battleground and blue states, but still be certified as the election winner, entrenching the GOP in permanent control of the federal government. There are warning signs that a majority of the current Supreme Court may interpret the Constitution this way.

* Expanding GOP approval of the big lie and legitimating political violence. The MAGA bloc is building large-scale mass support for outright use of violence to regain and retain power. Recent polls show that more than 50% of Republicans already agree that “the traditional American way of life is disappearing so fast that we may have to use force to save it.” More than 40% agree that “a time will come when patriotic Americans have to take the law into their own hands.” MAGA messengers appearing everywhere from Fox TV to local school board hearings threaten health workers, teachers, and election officials and work to swell those numbers every day of the week.

THE ANTI-MAGA MAJORITY CAN PREVAIL

If ever there were a “clear and present danger,” we face one now. It can be beaten back because the majority of the population is opposed to the MAGA program and inclined to defend what democratic space still exists in this country. But this majority is fragile, fragmented, and bombarded every day with messages that are aimed to confuse, mis-inform, and demoralize us. Effectively combating those messages requires partisans of social justice to scale up our work as we sink deeper roots in in the constituencies we aim to serve. It mandates going even beyond what progressives did in 2020 to counter racist voter suppression and all the other efforts to entrench white supremacy which lie at the heart of Trumpism.

The 2022 and 2024 elections will be the main tests of strength between the MAGA Faction and the country’s majority. The campaign to decide who controls Congress going into the next presidential contest has already begun. The outcome will determine not just what legislation is passed and what judges are confirmed in 2023 and 2024 but what body may determine the outcome of the 2024 Presidential contest if the result is contested.

These elections take place in the context of “trench warfare” where every front of battle must be engaged. There is a battle for public opinion; there are campaigns to influence Congress, state legislatures and city councils. Fights to be joined over police violence, anti-trans legislation, the right to teach the truth about U.S. history. Strikes and unionization campaigns, the anti-immigrant horrors still happening at the border every single day. The “battle space” is global: Ignoring what’s afflicting the rest of the world is both a myopic outlook and a losing strategy. In the era of COVID, nuclear weapons, and climate change the global majority will rise or fall together.

On every battlefront, including the ballot box, it is imperative for partisans of social justice to stand as the most resolute defenders of democracy and opponents of the MAGA bloc. This is the key to being able to play a unifying and motivating role within the anti-Trump coalition, and hence contribute the most to its victory.

Unwavering defense of democracy is simultaneously crucial for beating the MAGA bloc in a way that simultaneously builds independent progressive strength. Substantial majorities in communities of color, labor, the LGBTQ community, and other constituencies believe – rightly! – that Trumpism constitutes a mortal threat to their interests and well-being. When we demonstrate on the ground that radicals are the most reliable and effective fighters against that threat, we maximize our chances of gaining support for our perspective and our organizations.

That kind of orientation offers the best prospects for making the 2022 and 2024 contests more than successful efforts at harm reduction. The more we contribute to beating the MAGA Faction in this round of voting, the better positioned we are to push further toward the multiracial democracy, transformed economy, and changed relationship with the planet and all the people on it that is so desperately needed.

Max Elbaum has been active in peace, anti-racist and radical movements since the 1960s. He is an editor of Organizing Upgrade and the author of Revolution in the Air: Sixties Radicals Turn to Lenin, Mao and Che (Verso Books, Third Edition, 2018).
Subscribe to Portside