Unions raise wages and benefits and increase job security. So, the fact that unionization rates are still in decline, despite some recent bright spots in worker militancy, is very bad news. 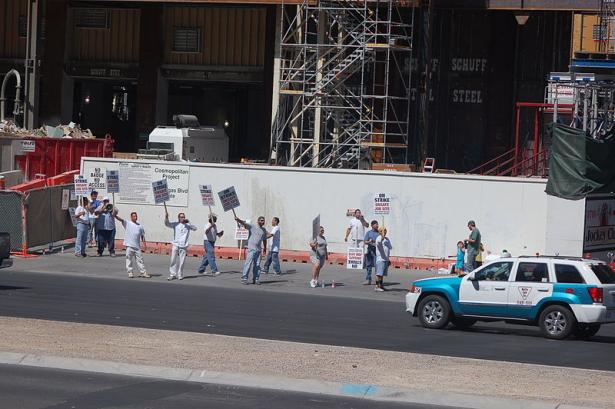 Union membership fell by almost 2 percent in 2021 as employment rose by over 3 percent. That took union density — the share of the workforce belonging to unions — down from 10.8 percent in 2020 to 10.3 percent last year, where it was in 2019. Density rose in 2020 because more nonunion workers lost their jobs in the COVID crisis than their unionized counterparts, but 2021’s return to employment undid that.

For the private sector, just 6.1 percent of workers were unionized last year, down from 6.3 percent in 2020, an all-time low for a series that goes back to 1900. (Official numbers from the Bureau of Labor Statistics began in 1983; I’ve assembled figures for earlier years from various sources.) Public sector density also fell, from 34.8 percent to 33.9 percent, not quite a record low. But the number of government workers organized in unions fell by 2.7 percent, almost four times as much as private sector members. The full history is graphed below. 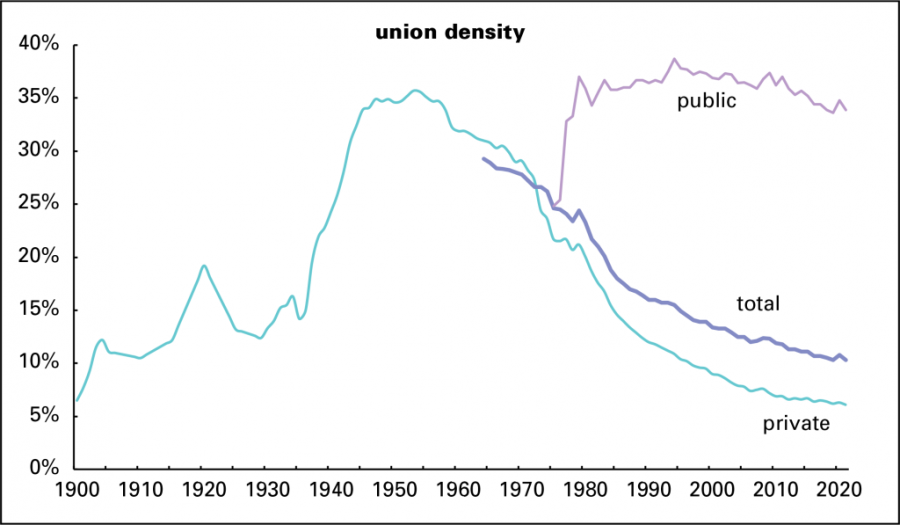 Motion pictures and sound recording (17.3 percent unionized), transportation and utilities (15.4 percent), private education (12.9 percent), and construction (12.6 percent) are the most heavily organized industries. Toward the bottom of the list are retail (4.4 percent), agriculture (2.9 percent), finance (2.3 percent), and food service and drinking places (1.2 percent). Aside from finance, the low-density industries are classically low-wage, and the weak union presence is a major reason why. Manufacturing, once a union powerhouse, is down to 7.7 percent — half 2000’s level (when the data begins). And over that period, the hourly wage in manufacturing has gone from being 3 percent above the overall average to 9 percent below.

As the map below shows, density varies widely by state. At the bottom are South Carolina (1.7 percent) and North Carolina (2.6 percent); at the top, Hawaii (22.4 percent) and New York (22.2 percent). The eleven original states of the Confederacy (Alabama, Arkansas, Florida, Georgia, Louisiana, Mississippi, North Carolina, South Carolina, Tennessee, Texas, and Virginia) have an average unionization rate of 4.4 percent, well under half the national average of 10.3 percent. Curiously, the Confederacy’s two latecomers, Kentucky and Missouri, come in much higher, an average of 8.1 percent, which takes the average for the full Confederate thirteen up to 4.9%. The average of the non-Confederate states is 11.2 percent. (These averages aren’t weighted by population.) The persistence of historical legacies is striking. 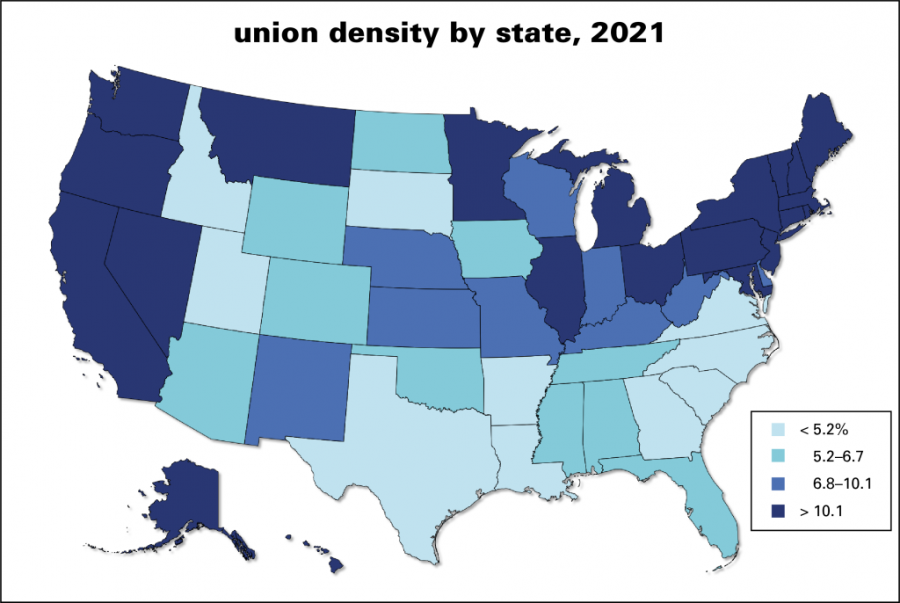 Since 2000, only four states have seen an increase of unionization, Vermont (up 2.0 percentage points), Oregon (+1.7), Washington (+0.8), and Kansas (+0.2). The rest, including DC, have all seen declines, led by Wisconsin, the home of former governor Scott Walker’s war on public sector unions, down 9.7 since 2000, and Michigan, down 7.5. Seven states, mostly in the South and Midwest, declined by 5 points or more.

Why care? Unions raise wages and benefits and increase job security. For example, 95 percent of unionized workers in the private sector have access to health benefits, compared with 68% of nonunion workers; figures are similar for retirement benefits and sick leave. And the union wage premium is significant across industries, occupations, and demographics. Weekly earnings for unionized workers overall are 20 percent higher than nonunion for all workers, and 14 percent in the private sector.

Not only are union wages higher in general, unions also compress traditional race and gender gaps. As the graph below shows, for all groups except Asian Americans, union wages are higher, often substantially so — 20 percent overall, as noted above, but 29 percent for black workers and 37 percent for Hispanics/Latinos. The Asian exception looks to be the result of a high concentration in high-wage, union-light sectors like tech. 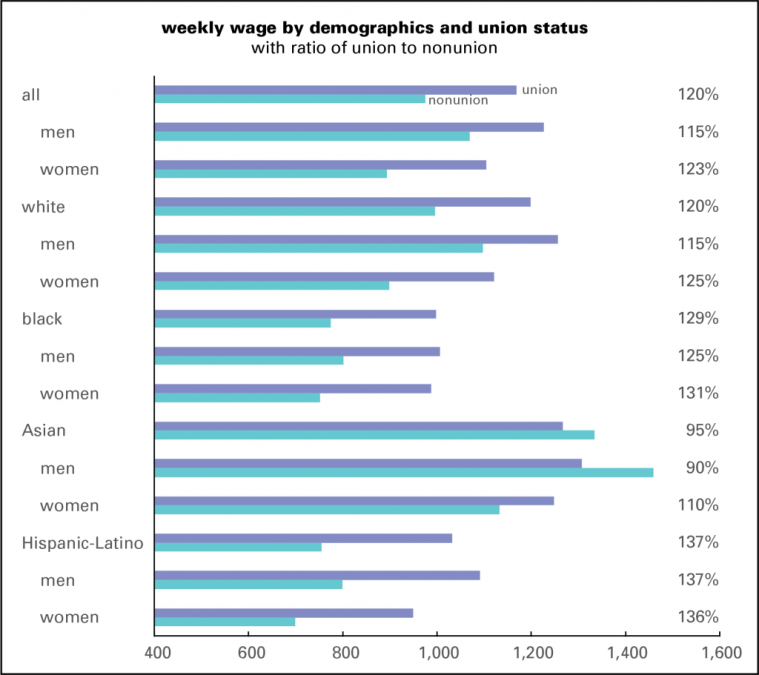 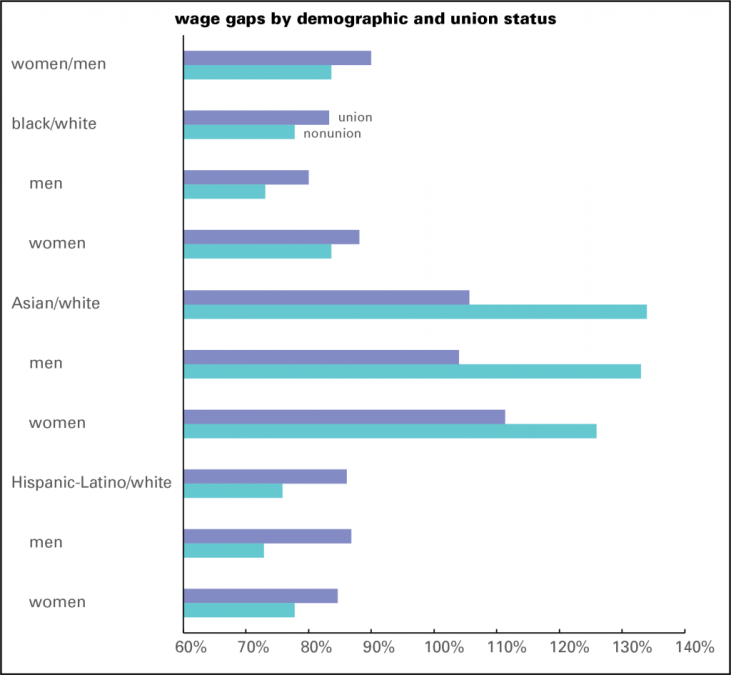 As I’ve done for several years in these annual union stats write-ups, I’ll conclude with this:

There are a lot of things wrong with American unions. Most organize poorly, if at all. Politically they function mainly as ATMs and free labor pools for the Democratic Party without getting much in return. But there’s no way to end the forty-year war on the US working class without getting union membership up. . . .

Doug Henwood published Left Business Observer, a newsletter on economics and politics, from 1986–2013. He hosts Behind the News, a weekly radio show that originates on KPFA, Berkeley, that is rebroadcast on several other stations across the U.S., and has a worldwide audience via podcast. His book Wall Street is now available for free download here. His other books include The State of the USA Atlas, After the New Economy, and My Turn.

LBO News by Doug Henwood provides insta-punditry on political economy since 2009. Click here to subscribe to LBO News via email