Starbucks, McDonald’s, Chipotle, Amazon – all protect profits by making customers pay more. We need the political courage to say they can and should cover rising costs themselves 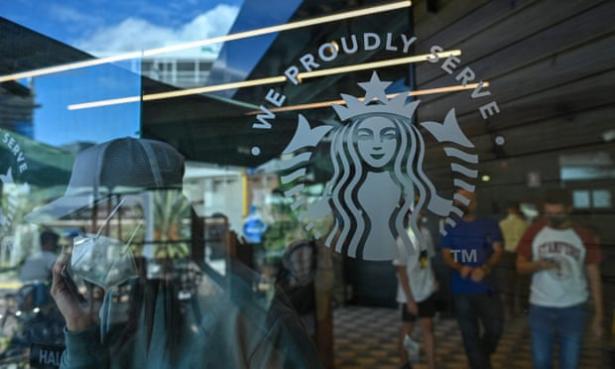 The Biden White House has decided to stop tying inflation to corporate power. That’s a big mistake. I’ll get to the reason for the shift in a moment. First, I want to be clear about the relationship between inflation and corporate power.

Share the profits! Why US businesses must return to rewarding workers properly

While most of the price increases now affecting the US and global economies have been the result of global supply chain problems, this doesn’t explain why big and hugely profitable corporations are passing these cost increases on to their customers in the form of higher prices.

They don’t need to do so. With corporate profits at near record levels, they could easily absorb the cost increases. They’re raising prices because they can – and they can because they don’t face meaningful competition.

As the White House National Economic Council put it in a December report: “Businesses that face meaningful competition can’t do that, because they would lose business to a competitor that did not hike its margins.”

Starbucks is raising its prices to consumers, blaming the rising costs of supplies. But Starbucks is so profitable it could easily absorb these costs – it just reported a 31% increase in yearly profits. Why didn’t it just swallow the cost increases?

Ditto for McDonald’s and Chipotle, whose revenues have soared but who are nonetheless raising prices. And for Procter & Gamble, which continues to rake in record profits but is raising prices. Also for Amazon, Kroger, Costco and Target.

All are able to pass cost increases on to consumers in the form of higher prices because they face so little competition. As Chipotle’s chief financial officer said, “Our ultimate goal … is to fully protect our margins.”

Worse yet, inflation has given some big corporations cover to increase their prices well above their rising costs.

In a recent survey, almost 60% of large retailers say inflation has given them the ability to raise prices beyond what’s required to offset higher costs.

Meat prices are soaring because the four giant meat processing corporations that dominate the industry are “using their market power to extract bigger and bigger profit margins for themselves”, according to a recent report from the White House National Economic Council (emphasis added).

The Washington Post reports that when the prepared congressional testimony of a senior administration official (Janet Yellen?) was recently circulated inside the White House, it included a passage tying inflation to corporate consolidation and monopoly power. But that language was deleted from the remarks before they were delivered.

Apparently, members of the White House Council of Economic Advisers raised objections. I don’t know what their objections were, but some economists argue that since corporations with market power wouldn’t need to wait until the current inflation to raise prices, corporate power can’t be contributing to inflation.

This argument ignores the ease by which powerful corporations can pass on their own cost increases to customers in higher prices or use inflation to disguise even higher price increases.

It seems likely that the Council of Economic Advisers is being influenced by two Democratic economists from a previous administration. According to the Post, the former Democratic treasury secretary Larry Summers and Jason Furman, a top economist in the Obama administration, have been critical of attempts to link corporate market power to inflation.

“Business-bashing is terrible economics and not very good politics in my view,” Summers said in an interview.

Whether through antitrust enforcement (or the threat of it), a windfall profits tax or price controls, or all three, it’s important for the administration and Congress to do what they can to prevent hugely profitable monopolistic corporations from raising their prices.

Otherwise, responsibility for controlling inflation falls entirely to the Federal Reserve, which has only one weapon at its disposal – higher interest rates. Higher interest rates will slow the economy and likely cause millions of lower-wage workers to lose their jobs and forfeit long-overdue wage increases.

Robert Reich, a former US secretary of labor, is professor of public policy at the University of California at Berkeley and the author of Saving Capitalism: For the Many, Not the Few and The Common Good. His new book, The System: Who Rigged It, How We Fix It, is out now. He is a Guardian US columnist. His newsletter is at robertreich.substack.com

… The Guardian has a small favour to ask. We’d like to thank you for putting your trust in our journalism last year - and invite you to join the million-plus people in 180 countries who have recently taken the step to support us financially, keeping us open to all, and fiercely independent.

In 2021, this support sustained investigative work into offshore wealth, spyware, the 6 January insurrection, the corporate actors behind the climate crisis, and the abuses of Big Tech.

The new year, like all new years, will hopefully herald a fresh sense of cautious optimism, and there is certainly much for us to focus on in 2022 - the US midterms, the ongoing fight for racial justice, the next round in the struggle against the pandemic and a World Cup.