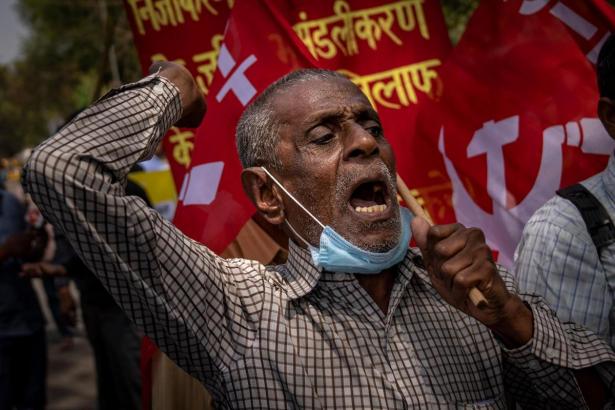 Right in the beginning of peaceful protests that involved workers and union members who were confronted by violence in August, 2020, there was a general solidarity online campaign launched to send a clear signal to the authorities that the global labour movement would not tolerate repressions going on in Belarus.

India’s industrial workers, employees, farmers and agricultural labourers observed a two-day general strike on March 28-29, 2022 under the slogan ‘Save People, Nation’. There is a 12-point demand charter for which workers and peasants have been fighting for several years.

Russian-language protest music includes some classics from the Soviet period, as well as songs from all the genres that have found a local audience in the last 30 years. Today’s war in Ukraine and crackdown on peace demonstrators is already adding new mustic and lyrics to Russian musical and political culture.

Palestinians headed to the polls March 26 to cast their votes in the second round of the local council elections held in the West Bank. Under the name of independent lists, several alliances were forged, most notably between Hamas and the Popular Front for the Liberation of Palestine (PFLP).

The governing party has been criticised for abandoning the impoverished in favour of naked greed and avarice judging by their presidential candidates ahead of the elective conference.

Reform measures will be associated “above all with the reduction of indirect expenses, the reduction of costs and the search for greater efficiency, avoiding attempts to solve the problem of losses by transferring all costs to prices, which would have an inflationary impact.”

In 1963 Walter Rodney moved to London. He had received a scholarship to undertake a PhD in the UK. In the UK, Rodney confronted racism, a sectarian left and studied Marxism alongside CLR James.