A choice for organized baristas - if you can't get a union, buy the coffee shop 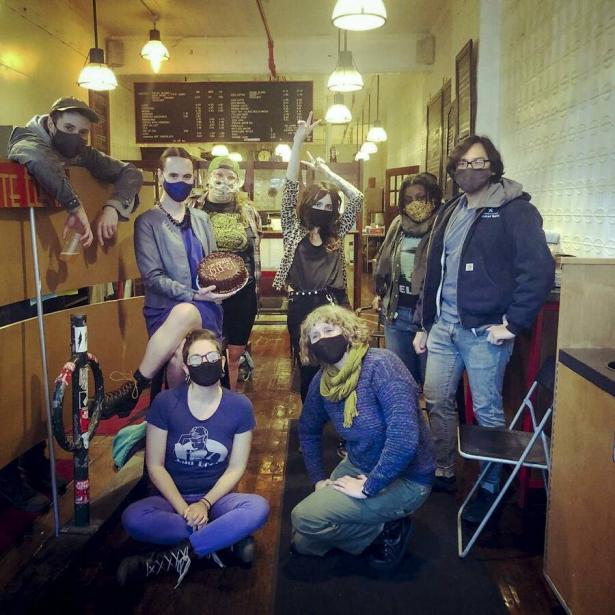 Workers celebrate the purchase of White Electric Coffee, which reopened May 1, making it one of only a few dozen worker-owned restaurant or café cooperatives in the country. Credit,Mindy Stock

Dozens of local Starbucks employees in the Los Angeles area who have joined a national movement to unionize Starbucks stores. the day after Starbucks workers in Anaheim voted to unionize, Starbucks CEO Howard Schultz told a New York Times reporter at a live event that he would never embrace the union as a trusted partner.

This year marks one year since Juneteenth was declared a federal holiday, and we’re already being bombarded with insincere displays of solidarity from corporations seeking to capitalize on the day.

The Right used the anti-abortion crusade in its push towards minority rule. The Left has a lot to learn from how they did it.

Lesbian lip-locking in Pixar’s “Lightyear” has produced a spate of pearls-clutching but it’s one of the least weird clinches in the Disney canon.

Inside a gabled white clubhouse overlooking the hills of a Cherokee County golf course, dozens of parents from across the county had assembled on a Sunday afternoon for a lesson in an emerging form of warfare. School board meetings would be their battlefield. Their enemy was CRT.

Online, many fans expressed hurt and frustration at Lizzo’s use of the word “sp-z,” describing it as an ableist slur. She could have gotten defensive, or defiant, or she could have gone the normal celebrity route with a non-apology. Instead, she took the high road and offered a thoughtful, sincere apology worth quoting in full.

Denied a Union, The Workers Bought the Joint
By Harry August
In These Times

In 10 months, baristas at White Electric, a coffee shop in Providence, went from unionizing their workplace to starting one of only a few dozen worker-owned cafes in the country.

Thirty-one members of a white nationalist group were arrested in Coeur d’Alene. Members of the Patriot Front were arrested downtown near a Pride in the Park event. Mayor Jim Hammond referenced the city’s history with hate groups and extremism, particularly a neo-Nazi compound that existed in Hayden Lake, a suburb just north of Coeur d’Alene.

Even the good guys with guns wearing police uniforms took almost an hour before they stormed the classroom where the shooter was, and 19 of them waited until they could be backed up by a SWAT team from the Border Patrol before they finally used their guns to kill the murderer of 19 children and two teachers.