Voters in Colombia and France put left coalitions in office, and Tunisian workers shut the country down 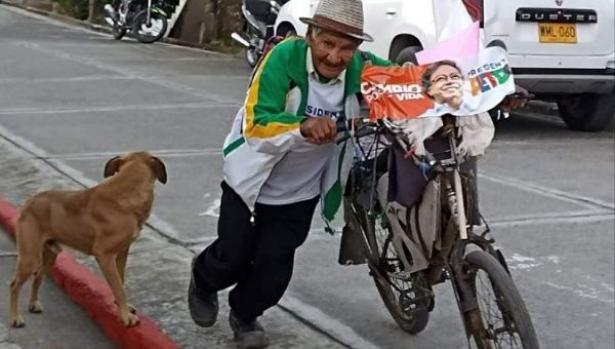 A strike by Tunisia’s largest trade union ground the country to a halt despite last-minute attempts by the president to prevent it from taking place.The Tunisian General Labour Union (UGTT) called for the country’s three million public-sector workers to strike and it said most took part on Thursday, which led to closed airports, public transport, ports, and government offices.

Michael Roberts / The Next Recession (London)

Thousands of members of the National Union of Rail, Maritime and Transport workers (RMT) have stopped work. It’s an expression of the democratic will of RMT’s members: 89 per cent voted in favour of the action. This is a resounding mandate, which exceeds even the deliberately high threshold the Tories brought in with the 2016 Trade Union Act.

On 9 April activists occupied Galle Face Green: a park in Colombo facing the Presidential Secretariat. This now iconic site has been renamed ‘GotaGoGama’. The crowds were joined by a delegation from 1,000 different trade unions, who staged a general strike – the first in four decades – calling for the government of Gotabaya Rajapaksa to step down.

For three years, large families have been holding regular protest rallies, which are almost always unsanctioned and generally end with the involvement of riot police. The protesters have also besieged government offices and picketed official events. Once, they even occupied the Kazakhstani capital’s animal shelter.

North and South, repression and violence is taking place against those standing up to extractive industries. This is part of the extractive capitalist model that permits private corporate interests to overpower human rights, self-determination, and democracy.

Against the background of growing resentment among common people, lawlessness and attacks against dalits, women and the minorities, a convention of workers of the CPI (Marxist), CPI, CPI (ML-Liberation) and RJD (National People's Party) heralded a new chapter in the ongoing battle against the anti-people, pro-corporate and naked communal politics of the BJP regime.

The German socialist party Die Linke inspired socialists and progressives across Europe as a chance to reunite and rebuild the Left in the European Union’s most populous and most powerful country. Today, however, the party finds itself in a deep crisis, with its electoral fortunes and, increasingly, its future existence as a nationwide political force on the line.