The Case That Could Blow Up American Election Law

A radical and baseless legal theory could upend the country’s most essential democratic process. 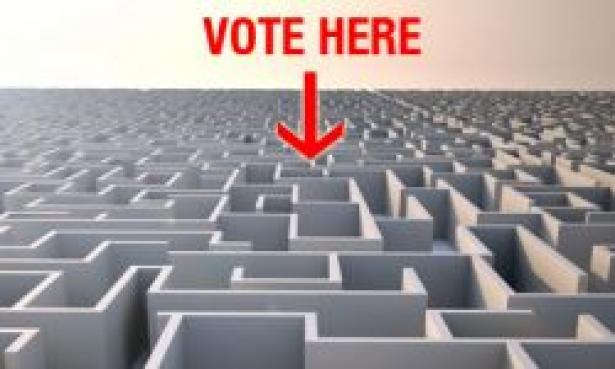 Members of the supreme court’s conservative supermajority just last week took the next step in a little-noticed, but extremely dangerous, project: attempting to jam into law a radical misinterpretation of the Constitution’s elections and electors clauses, which, if successful, would create electoral chaos across the country. Before next summer, and well in advance of the 2024 presidential election, the Court could strip state courts and state constitutions of their ability to check and balance state legislators when they make laws for federal elections, giving partisan majorities near-total control over how voters cast ballots and how those ballots are counted. And it would make the current Court—which already has a horrible track record on voting rights—the ultimate judge of whether the legislatures’ actions are legal.

The notion at the core of their project—the so-called independent-state-legislature theory—is on the fringes of American jurisprudence, so far out there that its few proponents have struggled to dredge up even the barest scraps of case law and history to substantiate it. But its supporters on the Court seem to believe they’ve found a shortcut around all of that with a case named Moore v. Harper, which they’ve just added to the Court’s docket for its term starting this fall.

The appeal traces back to this February, when the North Carolina Supreme Court undid an extreme partisan gerrymander of the state’s congressional map that would have given Republicans a large advantage in races for House seats. Several Republican state legislators asked the Supreme Court to restore the biased map for this spring’s primary elections. Their emergency filings claimed that the North Carolina state supreme court didn’t have the power to even review the legislatively drawn congressional map, despite the fact that the map violated several guarantees in the state’s constitution, because, in their view, neither state courts nor state constitutions should have a say in how federal elections are run.

If the legislators’ theory sounds radical, that’s because it is. It’s based on a stark misreading of the constitutional provisions that assign responsibility for regulating federal elections. Those clauses give that power to the “legislature” of each state (while reserving to Congress the ultimate power to set the rules). Fixating on the term legislature, proponents of the theory insist that the clauses grant exclusive and nearly unlimited power to those legislatures to run federal elections. The ordinary checks and balances of democracy—such as executive officers vetoing laws and courts reviewing and striking down the legislature’s acts—fall by the wayside. The theory would create a vacuum of lawlessness in the most dangerous of places: elections.

Unsurprisingly, the theory was a crucial instrument for would-be election subverters hunting for any lever to overturn the results of the 2020 presidential election. It was a prominent talking point in President Donald Trump’s public campaign to undercut the validity of the results. In interviews following the election, President Trump himself invoked the theory, saying that “the legislatures of the states did not approve all of the things that were done for those elections.” And it was a key element of the litigation challenging which ballots should be counted in Wisconsin and Pennsylvania.

The Supreme Court rejected these challenges in the fall of 2020, and that should have been the final word on the theory. But Justice Samuel Alito, joined by Justices Clarence Thomas and Neil Gorsuch, wrote a “statement” validating the theory, in addition to dissents and concurrences to similar effect. And they sent the theory back out into the world with new momentum for a quick return. In doing so, these justices had, by the sheer power of their office, converted nonsense hastily cobbled together for desperate legal challenges into a litigation position that wouldn’t lead to the lawyers getting sanctioned. And they emboldened the North Carolina gerrymanderers to try their luck with the U.S. Supreme Court after they struck out with the North Carolina Supreme Court.

In March, the Court declined the legislators’ emergency petition with an unsigned order. But Alito—again joined by Thomas and Gorsuch—issued yet another dissent that all but asked the Republican legislators to file a full appeal to put their gerrymander back in place after the 2022 elections. (A concurrence from Justice Brett Kavanaugh suggested much the same.) The legislators obliged just 10 days later with a petition to the Supreme Court citing Alito’s dissent with its own meager citations as their justification. The Court has now repaid the favor by taking their appeal up for argument.

As is true with most decisions to grant a case a hearing, the justices did not explain their reason for taking the case. But Alito’s earlier dissent sheds light on the basic dynamic driving this dispute forward: a few justices actively stumping for an opportunity to turn their musings into law, as soon as possible, no matter how transparently baseless those musings are.

Alito’s dissent framed the theory at the core of the legislators’ appeal as an “exceptionally important and recurring question”—the sort of issue that the Court is normally supposed to step in and decide. But, to the extent that the theory is a “recurring question,” that’s only because these same justices keep talking about it. Indeed, the eight citations Justice Alito offered to support his call to take up the theory don’t show any recurring questions—other than ones that Alito, Thomas, and Gorsuch are asking themselves.

Four of Alito’s eight citations were to orders in 2020 election cases, but none of them supports the theory. Three of the four citations point to lawsuits that were based on the theory and were rejected, and the fourth had nothing to do with it. None contains even a shred of language suggesting that the theory might have merit or pointing to legitimate questions about its correctness. The fifth citation was to a concurrence (read: not even the majority view) in Bush v. Gore, the 2000 case that the Court itself essentially said should never be cited to resolve any future cases. That concurrence was hastily buried by the Court and lay untouched for decades, until Kavanaugh threw it into a footnote in a concurring opinion from a 2020 election case. The other three were dissents and concurrences from various 2020 elections cases … written by Alito, Thomas, and Gorsuch.

Larry Diamond and Edward B. Foley: The terrifying inadequacy of American election law

What’s more, Alito’s dissent cites no opinions from trial courts or appellate courts endorsing the theory or demonstrating a conflict among courts about its correctness—one of the most common grounds for the Supreme Court taking a case. And the dissent is devoid of other authorities, such as law-review articles, that a justice might reference to show the outline of a new, but valid, theory.

No wonder. In the two years since these justices have started touting the theory, a flurry of scholarship has debunked it from every conceivable angle: the plain meaning of the Constitution’s text, undisputed history of the founding era, a century of unbroken practice and precedent, and common sense. And there’s no meaningful difference of opinion among the lower courts. The legislators attempted to talk around these issues and beef the theory up in their filings, but their case is no stronger for it.

There’s no good reason, in other words, to believe that a case based on the theory can win. Except a few justices’ assertion that it might.

So when Alito writes that the Court “will have to resolve this question sooner or later,” he isn’t making an observation about the state of the law or some inevitable wave crashing upon the Court. He’s foretelling a crisis he’s creating.

If the Court follows through with transforming the legislators’ theory into law, American democracy will suffer. The theory wouldn’t just give broad license to extreme gerrymanders that would allow politicians to entrench themselves permanently against the voters’ will. It could also create pathways to invalidate basic and essential regulations created by state election officials to ensure that the machinery of elections works and that people can vote securely in emergencies. It could similarly undercut long-running state constitutional protections that shield people from discrimination at the ballot box and let them cast ballots in secret. It would place all the authority for future rule-making in the hands of state legislatures, among the most radically partisan political actors in the country today. It would hobble state courts’ authority to interpret these laws, limit state courts’ ability to review them for lawfulness under state constitutions, and put state courts under the superintendence of the country’s revanchist Supreme Court. That mayhem would result is an understatement.

The court can still reject this dangerous theory. Only four votes are required to decide to hear a case, but five public votes are necessary to make law. Thus far, the justices have been moving their project forward through its below-the-radar and comparatively barebones emergency-appeals docket. Going forward, though, the case will be on what’s known as the Court’s merits docket, attracting everything that entails: full briefing by the parties (and this case has many of them) and friends of the court, public argument, and months of scrutiny in the press and on social media.

Any justice ultimately seeking to write an opinion in favor of the independent-state-legislature theory will struggle to produce a credible one in the face of the overwhelming facts and law opposing it. Any such opinion will be even more transparently judicial fiat than even the Court’s recent roundly, and rightly, derided opinions expanding gun rights and eliminating constitutional protections for abortion rights.

The task now is to expose the baselessness and the radicalness of these justices’ latest project, as the public awakens to just how dangerous this Court really is, and its reverence for the Court plummets. Then perhaps the justices who have been asking how far they can push things will start asking a different question: How long can they keep propping up the insupportable?

[Thomas Wolf is the deputy director of the Democracy Program at the Brennan Center for Justice.

Ethan Herenstein is counsel with the Democracy Program at the Brennan Center for Justice.]