labor Democracy Is on the Ballot

Whether fighting to unionize or exercising the right to accept or reject negotiated contracts, workers are nurturing democracy where we most need it. If we are to save our political democracy, we must begin by establishing a beachhead for democracy in the workplace. 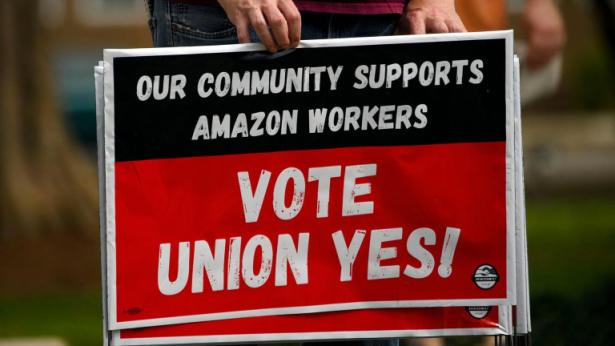 “Democracy is on the ballot” must be the most ubiquitous phrase in political speechmaking and commentary during this election season.  One can scarcely go a day without hearing it or reading it multiple times.  It is a phrase repeatedly invoked by President Biden, by virtually event Democratic candidate for office, by union leaders like Randi Weingarten of the American Federation of Teachers, by anti-Trump Republicans like Evan McMullen, and by conservative intellectuals like William Kristol.  Even the nonpartisan League of Women Voters agrees that “Democracy is on the Ballot This Year.”

In another time, such rhetoric might have seemed overblown, the product of partisans trying to whip their vote before a crucial election.  But in this tumultuous time, the phrase seems perfectly appropriate.  Rarely has the future of democracy seemed to hang so much in the balance.  In addition to the November election, the continuing repercussions of the January 6 coup attempt make the threat clear. The House committee should soon issue a final report, Oath Keepers founder Stewart Rhodes and four of his comrades are now on trial for sedition, and new revelations continue to emerge.

Meanwhile, according to FiveThirtyEight, 60 percent of U.S. voters will have the opportunity to vote for an election denier this fall.  Indeed, most Republican candidates still refuse to accept the results of the 2020 election. Unfortunately, the threat is not confined to our most conservative regions.  To the contrary, a recent Brookings study shows, states fielding the largest numbers of election deniers are the crucial swing states of Pennsylvania (with 37 deniers), Arizona (31), Michigan (24), and Wisconsin (21), states that could determine the outcome of the 2024 presidential election.  The Brookings report suggests that 199 of the 345 election deniers on the ballot in November stand a strong chance of winning, including 14 candidates for the statewide and 131 candidates for Congress.

Fortunately, whether democracy survives this time of peril will not depend only on what happens when the votes are counted on November 8, as important as those results will be. Electoral democracy can also be strengthened by another form of democracy that is also on ballots this fall: union elections and strike votes.  In those exercises of the democratic voice, we are currently witnessing a renaissance of majority rule.

According to the National Labor Relations Board (NLRB), there were 58 percent more petitions for union elections during the first three quarters of 2022 than there were by this time last year. Baristas have been leading the way.  Starbucks Workers United, the SEIU affiliate leading many organizing campaigns, has managed to turn the badly broken NLRB system on its head.  They have shown not only that organizers can win union elections. They can also use the process of fighting for them to build a democratic spirit.  Since their first union victory, when workers at the Elmwood Avenue Starbucks in Buffalo, NY, voted to unionize on December 9, 2021, a wave of Starbucks organizing has swept across the country. As of October 12, workers chose union representation in 233 of 280 stores where election results have been declared final by the NLRB, with a total of 3,359 baristas voting for union representation and only 1,320 voting against.

Amazon workers are also raising the flag of workplace democracy.  Amazon’s JFK8 warehouse voted to unionize in April, and other sites should hold union votes soon.  Workers at warehouse ALB1 in Albany are voting  in another NLRB supervised election this month, and their colleagues at  the ONT8 distribution center in Moreno Valley, amid the nation’s densest concentration of warehouses, the Inland Empire, recently filed an election petition.

These union fights have seen their own version of election deniers and manipulators.  The NLRB rules that Amazon violated the rules during the first union vote at the company’s Bessemer, Alabama, warehouse in April 2021, forcing a second election at the plant in March 2022 (which the union lost). Amazon fought to overturn the JFK9 vote in April, but the NLRB rejected that move after five months of appeals and legal wrangling.

Starbucks has also run afoul of labor law by intimidating its workers.  In September NLRB’s regional staff filed a 19-page complaint against some of the company’s Pittsburgh-area stores for engaging in a “myriad of threats” against the union’s local organizers.  When Starbucks was unable to discourage union sentiment, it followed the lead of Trump’s army of election deniers and attacked the electoral process. In an August 15 letter to the NLRB, it accused the agency of pro-union bias and sought a nationwide pause in mail-in union votes.

Unionization votes aren’t the only expressions of majority rule that workers have been exercising in recent months.  In September a threatened rail strike mobilized Secretary of Labor Marty Walsh into holding marathon negotiating sessions with rail companies and unions.  Yet early indications are that workers may reject the tentative agreement brokered in those sessions.  The Brotherhood of Maintenance of Way Employees, the nation’s third-largest rail union, announced on October 11 that its members voted down the agreement by a margin of 6,646 to 5,100.  Other rail union members may well follow suit in votes over the coming weeks.

And rail workers aren’t the only ones holding strike votes.  Within recent days strike votes have been taken by Temple University Nurses; Orange County Teamsters; the University of Washington Library’s union; University of Minnesota service workers; public health system doctors in San Jose; and Milwaukee bus drivers.  In all cases, strikes were authorized by overwhelming margins.

Amid a national crisis of electoral democracy, these grassroots fights for workplace democracy offer hope. And they are beginning to have an impact on our politics.  This summer, the California legislature passed a bill to allow farmworkers to cast mail-in ballots in union elections.  Governor Gavin Newsom, who clearly hopes one day to occupy the Oval Office, initially indicated that he would veto the act, keeping his state’s powerful and wealthy growers happy.  But his position proved hard to sustain in a country where “democracy is on the ballot.”  President Biden was quicker than Newsom to realize the implication of the farmworkers’ bill and spoke out on behalf of its enactment. “The least we owe them is an easier path to make a free and fair choice to organize a union,” Biden said. “Government should work to remove —  not erect —  barriers to workers organizing.”  Feeling the heat, Newsom reversed course on September 28 and signed the bill.

Whether fighting to unionize or exercising the right to accept or reject collective bargaining agreements, the workers involved in all of these struggles are nurturing democracy where we most need it.  For our history suggests that if we are to save our political democracy, we must begin by establishing a secure beachhead for democracy in the workplace. The words of the crusading Progressive-era labor lawyer Frank P. Walsh are as true now as when he spoke them in 1918.  “Political democracy is an illusion,” Walsh said then, “unless builded upon and guaranteed by a free and virile Industrial Democracy.”

Whatever the outcome of the election on November 8, we need not wait until 2024 to put democracy on the ballot again.  We need to prepare for 2024 by putting it on the ballot every day in the workplaces around this country.

Joseph A. McCartin is Professor of History and Executive Director of the Kalmanovitz Initiative for Labor & the Working Poor at Georgetown University.

Working-Class Perspectives offers weekly commentaries on current issues related to working-class people and communities. Contributors discuss a variety of issues, from what class means to how it intersects with race and gender to how class is shaping American politics. We welcome relevant comments of 500 words or less.  For questions or comments about this blog, e-mail Sherry Linkon. For assistance with news stories about working-class politics and culture, call or e-mail John Russo, 330-207-8085.