Can the Hotel Workers’ Union Save the Democrats?

In Nevada, Arizona, and Pennsylvania, the union has been talking to voters about progressive fixes to inflation for months, when Democrats didn’t know what to say. 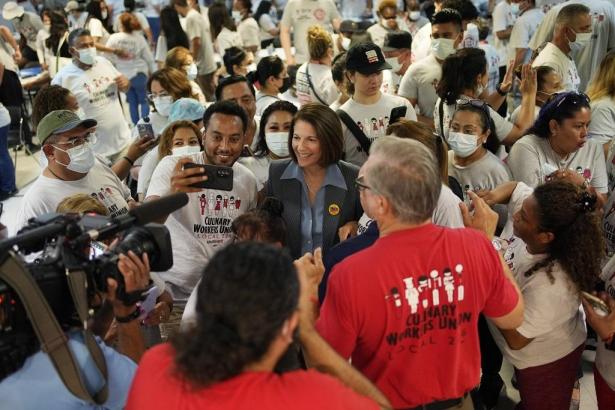 “It doesn’t work when our members knock on doors and start talking about the candidates,” says Gwen Mills, the secretary-treasurer of UNITE HERE, the union of hotel employees.

This isn’t that hard to understand. The people who answer those doors—particularly in Las Vegas, which has seen more television and social media political advertising this year than perhaps any other city—have had it with the relentless, inescapable talk about the candidates. If precinct walkers introduce themselves by saying they’ve come to talk about some estimable office seeker, they’re all but certain to be greeted by a look of horror and a closing, if not slammed, door.

UNITE HERE members get this; they’ve walked the walk. In 2020, when COVID compelled most campaigns to forgo canvassing and rely on the phones for voter outreach, UNITE HERE already had special protective gear and protocols devised for its members who’d had to keep working in hotels. Donning that gear and observing those protocols, they proceeded to walk more precincts than any other organization on the Democratic side of the ledger that year. Talking to well over a million voters in Vegas, Reno, Phoenix, Philadelphia, and Atlanta, they played a key role in Joe Biden’s victory and in the Democrats winning control of the Senate.

This year, they have even more members knocking on doors than they did two years ago. And by listening to people on their doorsteps, they concluded well before most Democratic campaigns that they had to talk about people’s primary concern: the soaring cost of living.

In Las Vegas, what’s soaring above all else is rents, which have risen by 28 percent in Clark County (i.e., metro Vegas), and by 35 percent in North Las Vegas, which is disproportionately home to this year’s key swing constituency, working-class Latinos, as well as many of the 50,000 members of UNITE HERE’s Vegas local. Early this year, the local collected enough signatures to put an initiative on the North Las Vegas ballot which would have limited rent increases in the city to the overall rate of inflation. But the city council, in a show of not-surprising solicitude to Vegas’s realtors, came up with a reason to knock it off the ballot.

Undaunted and prescient, the local’s door-knockers now begin all their encounters talking to voters about soaring rents and asking them if they’d like to sign a petition to the legislature to create statewide rent control. If the voters say yes, only then do the canvassers tell them that both Sen. Catherine Cortez Masto and Gov. Steve Sisolak support the proposal, while their respective Republican opponents—Adam Laxalt for Senate and Joe Lombardo for governor—oppose it.

That, I suggest to you, is a model for how pro-Democratic canvassers should be interacting with swing voters in the waning days of this fall’s campaigns.

“People have been talking about the price of food, gas, and rent,” says D. Taylor, the international president of UNITE HERE. Until recently, he adds, Democrats weren’t. “We started this in March; we could see private equity was buying housing stock and jacking up rents, which would sometimes rise by $500 in a single month. A single mother in a two-bedroom apartment would have to give it up and move in with another single mother in a two-bedroom.”

This is a model for how pro-Democratic canvassers should be interacting with swing voters in the waning days of this fall’s campaigns.

“We’ve been on the doors in Las Vegas and Philadelphia since March; we shape our campaigns around what those people tell us,” says Mills, who oversees the union’s electoral activities. “Our rate of contact [having people actually talk with the canvassers instead of slamming the door] and of positive response goes up when we lead off talking about issues that concern them: housing in Vegas, crime in Philadelphia. Then you can have a conversation. We’ve had a double-digit improvement in our rate of contact when we start off talking about those issues.”

On crime, “we don’t have a panacea,” Taylor acknowledges. Mills adds, “People know there are no easy answers. But they want to be heard, they want to be acknowledged. We do that, we acknowledge the difficulties they face.” In Philadelphia, the canvassers also point out that Republican gubernatorial candidate Doug Mastriano wants to make it easier for people to carry guns, something that his Democratic opponent, state Attorney General Josh Shapiro, opposes.

For UNITE HERE, putting many hundreds of its members in the field full-time is something of a twofer: Not only are they affecting the course of public policy, but they are building a cadre of members with experience in persuading, motivating, and mobilizing people who need some context and some prodding to take action. Today’s precinct walkers, the union expects, will be tomorrow’s workplace organizers. “This training is woven into everything we do every day,” says Mills.

By regularly walking precincts and hearing out voters on what they want and fear most, UNITE HERE was able to craft a bread-and-butter message that contrasted Democrats’ positions with Republicans’, well before the Democrats themselves began devising and revising their messaging. Only in the campaign’s final days are Democrats drawing major contrasts on issues like corporate profits, the minimum wage, and Social Security.

Taylor and Mills are apostles for the kind of regular voter contact that once informed Democratic strategy. The mystique of the Tammany ward heeler is part history and part myth, but it points in a direction that Mills says the party should embrace. “That infrastructure built the Democratic Party,” she says, “and we need to rebuild it.”

The union isn’t waiting for the party to come around. As of last week, its members had contacted 700,000 Nevadans, 500,000 Philadelphians, and 250,000 Arizonans, which, Mills says, makes them the largest ground operation in those three states. “If the races in those states are winnable,” Mills adds, “we’ll push them over the top.”

[Harold Meyerson is editor at large of The American Prospect.]