Ginsburg attacks the ahistorical character of the majority decision. Quoting Shakespeare, she notes that the majority "ignores that `what's past is prologue'". What a profound observation, `the past is prologue'. It neatly, and with a literary flourish, sums up the deep defect with the Court's decision, its deliberate ignoring of both the contemporary ramifications of historical racism in this country as well as its current vitality. 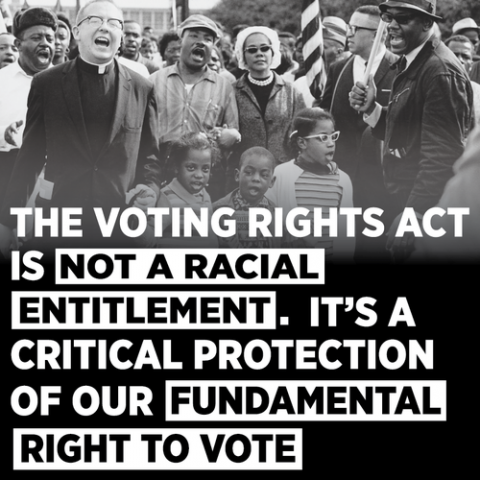 "Today, the Supreme Court stuck a dagger into the heart of the Voting Rights Act of 1965, one of the most effective pieces of legislation Congress has passed in the last 50 years." Congressman and Civil Rights Legend John Lewis,GAProgress - Progressive Politics in the Peach State
Of Ruth Bader Ginsburg, John Lewis, Jimmie Lee Jackson, Fannie Lou Hamer, Rosa Parks, Coretta Scott King, Herbert Marcuse, Joseph Weydemeyer, Karl Marx, Frederick Douglass, Jim Crow, the New Jim Crow, and the New New Jim Crow: Brief Thoughts on Shelby County v. Holder
I know - the title is too long. If I truly intend to share brief remarks, I've already used up my time with the title. But, I have my reasons. [1]
Here we are on July 4th on the historic grounds of the home of abolitionists Stephen and Harriet Myers which regularly housed freedom seekers escaping slavery, with the fiery words of Frederick Douglass in our minds and souls, and I am given the task of reflecting briefly on the recent Supreme Court decision in Shelby County v. Holder. 2
Fortunately, Frederick Douglass has already analyzed this case for us. Here is Douglass' assessment of the Shelby case, remarkable for having been written 161 years before the Court issued its decision: