What Dr. King didn't Say - Misremembering the March on Washington

The March on Washington grew out of a clear understanding of the problems facing African Americans, and presented a discrete list of demands, including a comprehensive and effective civil rights law that would guarantee access to public accommodations, "decent housing, adequate and integrated education, and the right to vote." Also a "massive federal program to train and place all unemployed workers - Negro and white - on meaningful and dignified jobs at decent wages" 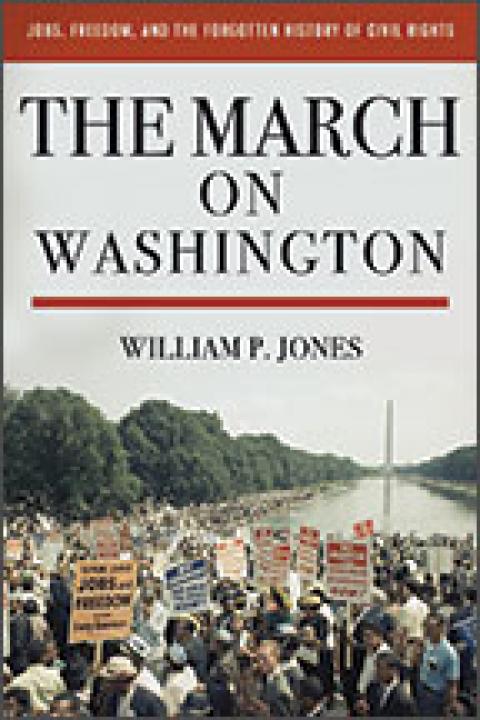 "The March on Washington" by William P. Jones, Norton
The March on Washington: Jobs, Freedom, and the Forgotten History of Civil Rights
by William P. Jones
Norton, 320 pp.
On August 28, 2010, Glenn Beck held the "Restoring Honor" Rally in Washington, D.C., where he gathered approximately 300,000 people for a full co-opt of Martin Luther King Jr. The night before the march, Beck stayed in the same D.C. hotel where King had spent the night before the 1963 March on Washington; Beck stood on the same steps of the Lincoln Memorial as King stood when he delivered his "I Have a Dream" speech; and he had with him Alveda King, one of King's nieces, who has devoted herself to antiabortion activism. Beck's message, however, was significantly different from King's. It was a paean to the past and to the military, a patriotic religious revival that asked for faith in God and country.
Many were shocked by the brazen attempt by Beck, the man who famously called the first black president a racist who has "a deep-seated hatred for white people or the white culture," to transform the March on Washington into what he wanted it to be. But however cynical Beck's rally on the forty-seventh anniversary of the March on Washington was, it was not out of line with the general way that the march has been used and remembered in the half century since it took place. William P. Jones's new book, The March on Washington: Jobs, Freedom, and the Forgotten History of Civil Rights, is timed to coincide with the fiftieth anniversary of the march, and attempts to reclaim both the march itself and the radical history of civil rights.
Where critics of Beck's rally focused on the way that Beck's vision differed from King's, Jones's book does much to displace King from the center of the civil rights narrative. Though King's famous "Dream" speech has become the hallmark of the march, it was not representative of the day's events or demands. Where King's speech was optimistic and vague ("So we have come to cash this check - a check that will give us upon demand the riches of freedom and the security of justice"), the march had specific radical demands that had been debated for decades by the organizers.
The idea for a march on Washington came in 1941 from an anonymous black woman who shouted to A. Philip Randolph during a mass meeting in Chicago that "we ought to throw 50,000 Negroes around the White House, bring them from all over the country, in jalopies, in trains, and any way they can get there ... and keep them there until we can get some action from the White House." This woman was responding to the tension between President Franklin Delano Roosevelt's attempts to rally Americans for the defense effort through the repeated invocations of the freedoms Americans enjoy and the reality of the lack of freedoms enjoyed by most African Americans. Her solution - more Occupy than one-day rally - was originally scheduled to take place that year. The 1941 march was intended to show the "mass power" of African Americans in order to achieve liberation from, as she said, "economic, social, and political slavery."
However, on June 18, 1941, Roosevelt met with Randolph and others from the March on Washington Committee and explained that he believed the march would do more harm than good. One week later (and one week before the march was scheduled to take place), Roosevelt issued an executive order instructing federal agencies to administer their vocational and training programs without discrimination, and created the Fair Employment Practices Committee to enforce the order. Randolph proclaimed victory and declared the march "unnecessary at this time."
Unfortunately, Roosevelt's executive order proved ineffectual and ill-enforced, leading many to realize that whatever promises were made, a show of power was necessary. For the following two decades, as local protests and boycotts took place across the South, the idea of a march on Washington remained a missed opportunity and a lingering possibility.
Competing proposals and tactics sought to provide social, political, and economic opportunities to African Americans. Roy Wilkins and the National Association for the Advancement of Colored People (NAACP) believed in litigation and lobbying rather than protest. King's Southern Christian Leadership Conference (SCLC) and the Student Nonviolent Coordinating Committee (SNCC) focused on nonviolent protests in the South. Whitney Young and the National Urban League focused on a "Marshall Plan for the Negro" to improve housing, education, health care, and employment opportunities. Though the major civil rights organizations agreed on the need to end discriminatory practices and deliver economic opportunities, their competing visions made it unlikely that they would participate in a coordinated protest.

In early 1963, Randolph and several other organizers invited Anna Arnold Hedgeman, who had been involved in the first iteration of the March on Washington, to help plan "a March on Washington for Jobs." Hedgeman tried to enlist the support of the NAACP and the Urban League, but failed. She tried to include Dorothy Height, the president of the National Council of Negro Women, but was rebuffed. She recognized that the SCLC and SNCC were turning their attentions to Washington and set up a meeting between Randolph and King. The result was the decision to march on Washington "for Jobs and Freedom."
Almost twenty-two years to the day after President Roosevelt met with Randolph and other organizers of the march to offer tepid legislation and advice that a mass protest might harm their cause, President John F. Kennedy met with Randolph and other organizers of the march to explain his support for a moderate civil rights bill and to explain that a march might harm their cause. This time, the organizers held their ground and explained that the march would take place.

Bayard Rustin and Cleveland Robinson 3 weeks before the march
Dissent Magazine / Orlando Fernandez, Wiki. Com.
The March on Washington grew out of a clear-eyed understanding of the problems facing African Americans, and presented a discrete list of demands, including a comprehensive and effective civil rights law that would guarantee access to public accommodations, "decent housing, adequate and integrated education, and the right to vote." The demands also included federal withholding of funding from any discriminatory program, desegregation of all schools by the year's end, enforcement of the Fourteenth Amendment by reducing congressional representation from states where citizens were disenfranchised, barring discrimination in housing projects that received federal funding, and granting the attorney general the authority to issue injunctions when any constitutional right was violated. The demands also included a "massive federal program to train and place all unemployed workers - Negro and white - on meaningful and dignified jobs at decent wages," raising the minimum wage to allow all Americans a decent standard of living, extending the Fair Labor Standards Act to domestic service and other excluded sectors, and creating a federal Fair Employment Practices Act that would bar discrimination from all levels of government, as well as by employers, contractors, employment agencies, and trade unions.
The speeches at the March on Washington captured the radical demands of participants. Randolph spoke of the "civil rights revolution," and declared that "the sanctity of private property takes second place to the sanctity of the human personality." Randolph explained the dangers of "profit-geared automation," and insisted that schools and education be properly funded. His radical vision demanded "new forms of social planning, to create full employment, and to put automation at the service of human needs."
The SNCC chairman, John Lewis, explained that "we are involved in a serious social revolution." He articulated explicit demands and time frames, stating,

King's speech was among the last of the day, and sought to reinvigorate weary travelers and marchers; however, it was "the least representative or attentive to the specific demands of the mobilization." In a strange bit of irony, it is King's speech that has come to embody the tenor and goals of the March on Washington.
Jones thoroughly recovers the radical reality of the events leading up to the march, as well as the march itself, and exposes the important question of how such a radical event was so quickly remembered as a model of moderation. Jones does not attempt to answer this question, but his book does contain hints and guideposts for a fuller analysis. Was it because the violence and disorder that was expected never materialized? Or was it that many of the social and economic demands of the march never came to fruition? Jones's book shows that it is not only Glenn Beck and the Tea Party participants who incorrectly remember the March on Washington. It is also the critics who repeatedly forget to include the march's slogan: "for Jobs and Freedom."
Buy this book from Amazon and support Washington Monthly: The March on Washington: Jobs, Freedom, and the Forgotten History of Civil Rights
[Moshe Z. Marvit is a fellow at the Century Foundation and the coauthor (with Richard D. Kahlenberg) of Why Labor Organizing Should Be a Civil Right: Rebuilding a Middle-Class Democracy by Enhancing Worker Voice. ]
[Thanks to the author for sending his review to Portside.]