Unions are strongly backing march in Washington, DC this Saturday to mark 50th anniversary of 1963 March on Washington for Jobs and Freedom. March is supported by wide array of civil rights, religious organizations, women's groups, and others. Read how different unions are mobilizing; radio interview with William P. Jones - Fifty Years Later, Commemorating and Learning from One of the Great Moments in History; 1963 March Organizing Manual. 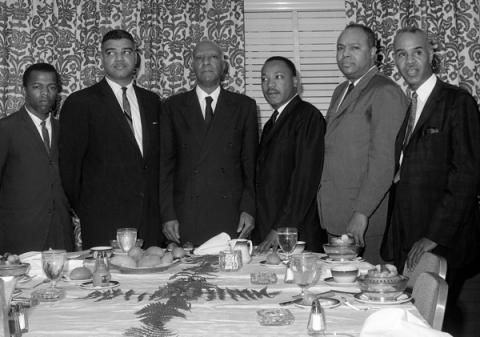 Civil rights leaders meet on March 6, 1963 in New York's Roosevelt Hotel to organize the March on Washington. Labor leader A. Philip Randolph (third from L) merged his planned jobs march with the Rev. Martin Luther King, Jr's freedom march., In These Times /OFF/AFP/Getty Images
Unions Join MLK 50th Anniversary Rally, Renew Call for `Jobs and Freedom'
By Bruce Vail
August 17, 2013
Working In These Times - In These Times
Unions are strongly backing a march in Washington, D.C., next week to mark the 50th anniversary of the 1963 March on Washington for Jobs and Freedom, where Rev. Martin Luther King Jr. gave his famous "I have a dream" speech. Participating unions are heralding King's strong ties to labor, and many are using the opportunity to renew the original march's call for jobs and freedom.
AFSCME  [American Federation of State, County and Municipal Employees] is one of at least 15 unions who are financially sponsoring the August 24 rally and bringing members to participate. AFSCME has chartered about 100 buses and plans to bring 3,000 to 5,000 marchers, says spokesperson Chris Fleming.
"At AFSCME, we have a special connection to Dr. King," says Fleming. "Many will remember that he died in Memphis in 1968 when he went there to support the sanitation workers who were organizing with AFSCME. The same struggle for economic justice continues today, so we are proud to honor him by continuing the struggle."
AFSCME is not the only union with a special connection to King. The United Auto Workers noted in an announcement this week that the UAW was one of the few unions to openly support the original 1963 march and that then-president Walter Reuther was one of the foremost labor leaders associated with 1960s civil rights movement. The UAW is organizing a fleet of buses to bring union members and supporters to the march, and union President Bob King is planning to march himself, the union says.
The principal organizer of the march is the Rev. Al Sharpton's National Action Network, which is joined by a wide array of other civil rights groups, religious organizations, women's groups, and others. Organizers are unwilling to estimate the size of the expected crowd, but several publications have speculated that some 100,000 will attend. Some of the nation's top political leaders are also scheduled to take part, so anticipation is building that the march will become a major national event.
Other unions sponsoring the march are the American Federation of Teachers (AFT), the American Federation of Government of Employees (AFGE), the Communications Workers of America (CWA), the International Association of Machinists (IAM), the International Brotherhood of Electrical Workers (IBEW), the Laborers International Union of North America (LIUNA), the National Education Association (NEA), the Office & Professional Employees International Union (OPEIU), the Service Employees International Union (SEIU), 1199SEIU (United Healthcare Workers East), the United Federation of Teachers (UFT), UNITE HERE, United Steel Workers (USW) and the Utility Workers Union of America (UWUA). Several other labor groups are also sponsors, including the AFL-CIO, Council of Labor Union Women, and the A. Philip Randolph Institute (APRI).
The APRI, named for one of the original organizers of the 1963 march and the long-time president of the Brotherhood of Sleeping Car Porters (later merged with another union and now part of IAM), is hosting a week-long schedule of events built around the anniversary of the "I have a dream" speech. The Brotherhood of Sleeping Car Porters was the first union for black workers chartered by the American Federation of Labor (AFL), and Randolph is remembered as the first black labor leader to become a member of the AFL executive board. There he was a tireless champion of the rights of African-American workers within organized labor and of civil rights within the larger society. He is credited with ensuring that 1963 march stressed "jobs" just as strongly as "freedom."
Though the list of speakers is not finalized, many organized labor figures are tentatively scheduled to address the August 24 crowd, including: AFL-CIO Secretary-Treasurer Arlene Holt-Baker; AFT President Randi Weingarten; APRI President Clayola Brown; NEA President Dennis Van Roekel; SEIU President Mary Kay Henry; and 1199SEIU President George Gresham. AFSCME President Lee Saunders will be one of the featured speakers, says Fleming. Saunders appeared on Sharpton's MSNBC show last week to proclaim the importance of the march in light of U.S. Supreme Court's recent decision to curtail the Voting Rights Act, and other events of special concern to African-American workers.
Donna McDaniel, Assistant Director of the Minority Advancement Department of LIUNA, says her union has chartered 16 buses, some from as far away as Ohio and Kentucky, and expects to bring 1,000 people to the march.
McDaniel spoke for several union representatives contacted by Working In These Times when she commented that "it is amazing how far we have come in the last 50 years in civil rights. But the original march had the theme of `jobs and freedom,' and I think we have lost ground on the jobs part. Unions are smaller and are under constant attack. Unemployment is high, particularly in our African-American communities, and very few of our politicians seem to care about that at all. We're still fighting for jobs."
Claude Cummings, a Texas-based CWA official at center of the union's march organizing efforts, agreed. "Some the same things we were fighting for in 1963 we are fighting for today. At CWA, we are working to strengthen our alliances with other labor unions and with other progressive groups beyond labor. So we'll be there next week," he says.
[Bruce Vail is a Baltimore-based freelance writer with decades of experience covering labor and business stories for newspapers, magazines and new media. He was a reporter for Bloomberg BNA's Daily Labor Report, covering collective bargaining issues in a wide range of industries, and a maritime industry reporter and editor for the Journal of Commerce, serving both in the newspaper's New York City headquarters and in the Washington, D.C. bureau.]
Join the 50th Anniversary of the March on Washington
by Mike Hall
August 8, 2013
AFL-CIO Now 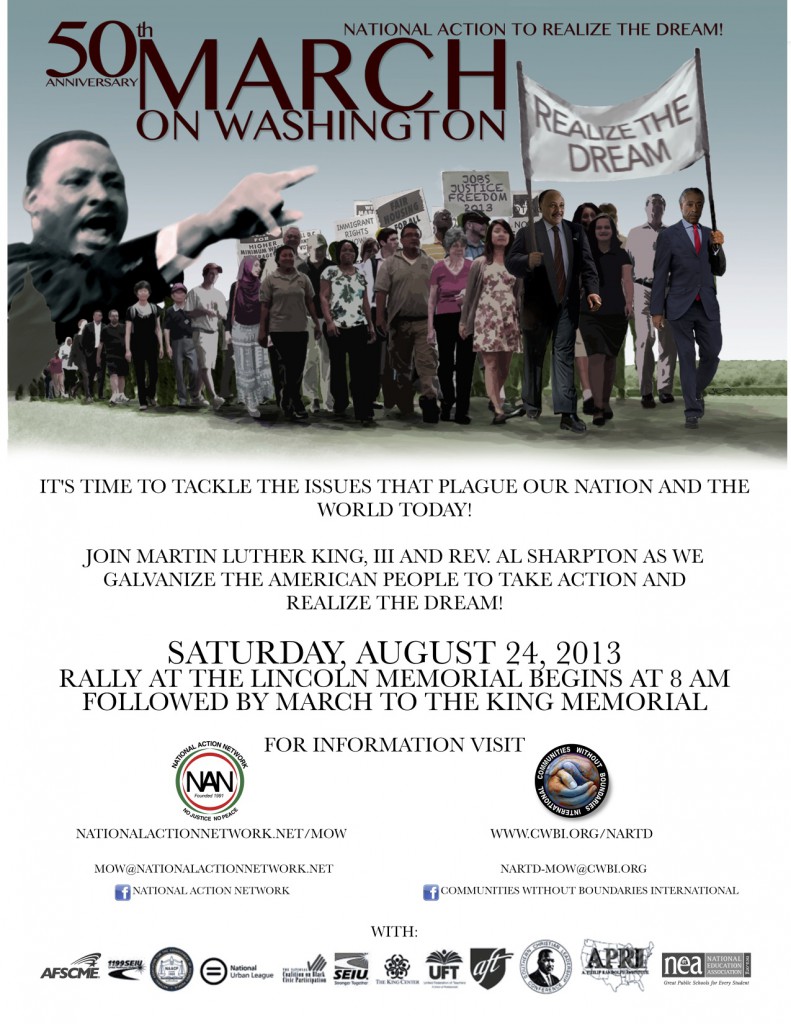 Aug. 28 marks the 50th anniversary of Dr. Martin Luther King Jr.'s March on Washington for Jobs and Freedom. To celebrate that half-century anniversary, civil rights, labor, faith and other groups will hold a weeklong series of events Aug. 21-28 in the nation's capital under the banner of "Freedom, Jobs, Peace and Social Justice."
Many of the events will take place on the National Mall, including the Aug. 24 "Realize the Dream" march and rally, the Aug. 25 Global Freedom Festival and the Aug. 28 "Let Freedom Ring" commemoration and call to action ceremony.
Click here for a day-by-day schedule.
The march, most widely known for King's "I Have a Dream" speech, propelled the passage of the Civil Rights Act and the Voting Rights Act. It was a combined effort by the civil rights and labor movements. One of the key figures was A. Philip Randolph, president of the Brotherhood of Sleeping Car Porters and an AFL-CIO vice president.
As part of the week's events, the A. Philip Randolph Institute (APRI, founded in 1965) is holding its National Education Conference. APRI President Clayola Brown said:
"As one of the "Big Six" legacy organizations which spearheaded the original march in 1963, the A. Philip Randolph Institute will join major organizations to bring together diverse communities representing all who are interested in civil, human and working rights of all Americans across this nation."
The "Big Six" were King; Randolph; John Lewis of the Student Nonviolent Coordinating Committee, now a U.S. House member; James Farmer of the Congress of Racial Equality; Roy Wilkins of the NAACP; and Whitney Young of the Urban League.
The UAW;  the Retail, Wholesale and Department Store Union (RWDSU); and the Transport Workers (TWU) were instrumental in supporting the march. While there has been immense progress since the 1963 march, 50 years later voting rights are being challenged, immigrants are being denied their basic human rights, and workers and their unions are under attack. Remember the core message from the March on Washington was that jobs and freedom go together.
In February, the AFL-CIO Executive Council said in a statement:

We pledge to use the 50th anniversary of the March on Washington to recommit ourselves to extending and deepening freedom, equality and democracy for all in this country, and building a strong social and economic justice movement.

Find out more from the National Action Network and from mlkdream50.com.
Fifty Years Later, Commemorating and Learning from One of the Great Moments in History - The 1963 March on Washington for Jobs, Freedom and Civil Rights
with  Professor William P. Jones, author of The March on Washington: Jobs, Freedom and Forgotten History of Civil Rights
by Building Bridges Radio
August 14, 2013
Building Bridges Radio: Your Community & Labor Report
Produced and Hosted by Mimi Rosenberg & Ken Nash 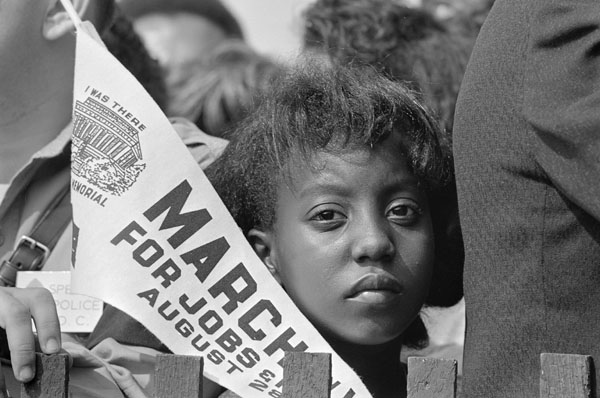 credit - Civil Rights Movement Veterans (http://www.crmvet.org)
We'll probe deeply into the significance of the massive 1963 march and the movement it inspired with civil rights and labor historian William P. Jones .  While in a resounding cadence, King lifted the crowd when he told of his dream that all Americans would join together to realize the founding ideal of equality, the very power of  King speech has also narrowed our understanding of the march organized by A. Philip Randolph Pres. of the Brotherhood of Sleeping Car Porters. Prof. Jones reminds us that this was a movement of sustained grassroots organizing, linked locally to women's groups, unions, civil rights and faith-based organizations across the country - it was a movement of the grassroots.  Prof. Jones restores the march to its full significance and with his fresh, compelling history delivers a new vision of this emblematic event and the broader movement it propelled and what it instructs for building a movement now for Jobs Freedom and Civil rights as we get ready to return once again  to March on Washington on August 24th to commemorate the 50th Anniversary of the first March to demand the implementation of its still unrealized goals of Jobs and Freedom.
play stream
download