Discussions between the United Auto Workers union and a Tennessee Volkswagen plant have raised fears among Southern politicians that union representation would deter businesses - and badly needed jobs - from coming to their respective states. 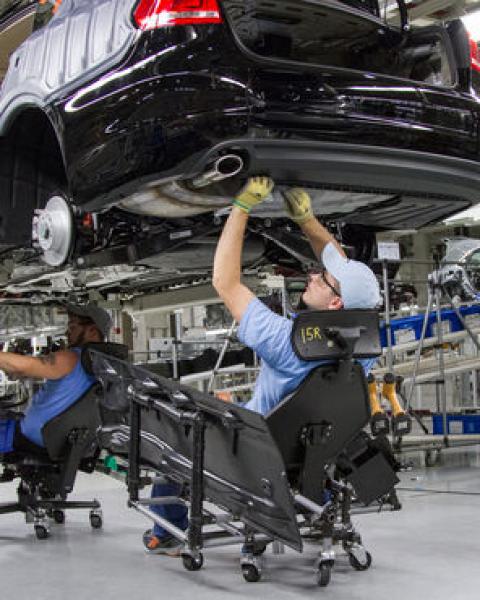 A Volkswagen employee works on a Passat at the company's plant in Chattanooga, Tenn., The Seattle Times / Erik Schelzig / The Associated Press

But Volkswagen faces pressure from labor interests on its supervisory board to grant workers a stronger voice at the plant. And Handelsblatt, a German business newspaper, reported Monday that UAW President Bob King and five other officials discussed the Tennessee plant with the company's employee-relations chief last week at VW's headquarters in Wolfsburg.

Tennessee Gov. Bill Haslam warned Tuesday his state's prospects could suffer if the UAW succeeds in representing workers at Volkswagen's lone U.S. assembly plant in Chattanooga. It's an argument many Southern politicians have made, fearing union representation would deter businesses - and badly needed jobs - from coming to their respective states.

"We have heard from other folks that we're recruiting that would be dampen their enthusiasm with Tennessee," Haslam said.

Volkswagen has declined to comment on reports that the company is meeting with the UAW. But Jonathan Browning, Volkswagen Group of America's president and CEO, said Wednesday that labor questions will be left to workers at the plant.

"It may or may not result in third-party representation," he told analysts, according to a spokesman. "Ultimately (it's) up to the employees. That hasn't changed."

German law gives labor representatives half the seats on the Volkswagen's supervisory board, where some members have raised concerns about the Chattanooga plant being alone among the company's large factories without formal labor representation.

That has led some to look toward creating a German-style works council, where elected labor representatives are given a voice in plant management.

Gary Chaison, a professor of labor relations at Clark University in Worcester, Mass., said it would take "tremendous flexibility" for the UAW to agree to a works council that falls short of traditional collective bargaining.

"Some people will see this as unions getting a foot in the door and asking for more," he said. "But some within the labor movement would say we've got the wrong foot in the wrong door, and we should be trying for collective bargaining and nothing more."

Carol Daugherty Rasnic, an international- and labor-law professor at Virginia Commonwealth University, said U.S. law is largely silent on works councils. An agreement between a workers group and the company would be covered by "plain old fundamental contract law," she said.

The UAW and its opponents disagree on whether a works council could be established in the United States without the participation of an established union. Rasnic said the latter route might be preferable for Southern workers.

"The advantage for the local workers would be they don't have to look up to any master union rules or pay dues or anything," she said. "They would be their own party."

While a decision on whether to organize is up to the plant's workers, and even then it's not clear if there is much interest among the rank and file, Volkswagen has sought advice from politicians like Republican U.S. Sen. Bob Corker, who played a large role in persuading VW to build the plant in the city where he was once mayor.

A vocal opponent of the UAW, he has feuded publicly with the union since pushing for wage and benefit concessions for union workers as part of the government bailout of automakers in 2009. Corker maintains that his role in the discussions helped the auto industry emerge from the economic crisis in stronger shape.

He said he urged Volkswagen to discourage workers from choosing the UAW to represent them, and argued that potential investors in Tennessee have already been scared off by the possibility of the union gaining wider influence.

Corker shrugged off questions about whether General Motors' once-idle plant in Spring Hill, Tenn., was revived through the UAW contract there.

"On the one hand, I'm happy that people have jobs," Corker said of a recent announcement that the plant would add or keep up to 1,800 jobs to expand production. "But on the other hand I certainly hope there aren't inroads made at additional facilities."

The UAW has failed so far to make inroads with foreign automakers in the South. The companies have fended off the union by offering competitive wages and benefits.

Other German automakers like BMW, which has a plant in Spartanburg, S.C., and Daimler, which builds Mercedes vehicles in Vance, Ala., have a corporate structure similar to Volkswagen's and could face some of the same internal labor pressures.

Alabama's Republican Gov. Robert Bentley recently said a union at the Mercedes plant would be counterproductive.

Alexander at the time apologized to Nissan officials. He claimed "99.9 percent" of Tennesseans welcomed the automaker to the state, adding: "I really don't understand why this minority is trying to run off a company that's bringing into Tennessee 2,200 jobs."

Since then, several efforts to organize the workforce at Nissan's plants in Smyrna and Canton, Miss., have fallen short.