Asking the Hard Questions about Israel

Amid floundering peace talks, Jewish artists, historians, and activists are taking an increasingly critical look at Israel's founding and history. 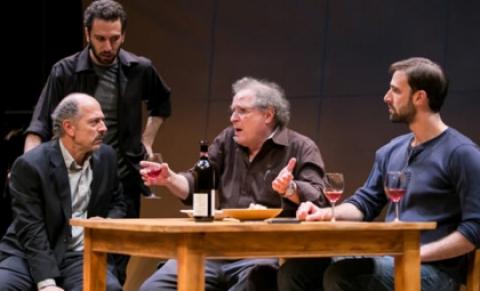 A scene from Motti Lerner's "The Admission," a critical yet nuanced look at the massacre and expulsion of the Palestinian residents of Tantura. The play's central question is a nagging one: to achieve co-existence, should we bury the past and move on, or ,Photo: DC Theatre Scene // Foreign Policy in Focus

In 1948, the village of Tantura fell within the borders of the newly created state of Israel. It was a small, seaside village of approximately 1,200 residents, most of them Arab farmers and fishermen. As the war between Israel and its Arab neighbors escalated, Tantura became an important transit point for smuggling supplies to a clutch of Arab villages in the area. To sever this supply line, and also because Tantura occupied a strategic location on the road between Tel Aviv and Haifa, the new Israeli government decided to "expel or subdue" the inhabitants.

What happened next was either an important military victory in a fledgling state's effort to defend itself or a massacre of civilians in the human rights tragedy that Palestinians call the Nakba (the expulsion). In either case, Tantura no longer exists.

Ordinarily, the conflict over rival interpretations of what happened more than 60 years ago takes place in dry academic journals. But the battle of Tantura has been refought many times.

The most recent skirmish is taking place in Washington, DC.

Israeli playwright Motti Lerner grew up hearing stories of what happened in Tantura. "My neighbors and family members, they all knew about the massacre; some of them participated in it," Lerner has said. "They were there and they saw it. This was not talked about frequently, but it was mentioned." He was also familiar with the controversy generated by an Israeli graduate student's thesis about Tantura, which detailed the actions of the Israeli Army's Alexandroni Brigade. Members of the brigade had taken the student to court over the allegations in the thesis that a massacre had taken place.

Lerner turned these stories into a play, The Admission. The Washington-based Theater J, which is housed at the DC Jewish Community Center, planned to mount the first English-language production of the play in spring 2014. Theater J had presented other Lerner plays to Washington audiences and indeed had established a reputation for thoughtful and challenging productions addressing Middle East issues. It was natural for Theater J to stage Lerner's take on a painful historical episode and its effects on the lives of Israelis and Palestinians today.

Not everyone agreed. A group called Citizens Opposed to Propaganda Masquerading as Art (COPMA) mobilized to block the production. According to their website, COPMA believes that "there is no place in our Jewish community centers and institutions for anti-Israel propaganda and that the use of charitable donations to support activities harmful to the State of Israel is a breach of the trust that donors and supporters place in these institutions." To stop The Admission, COPMA followed the money. It targeted the funders behind Theater J. Without ever seeing the play, COPMA managed to get the production downgraded to a three-week staged workshop, which is wrapping up its run at the end of this week.

If you only read COPMA's description of the play, you might expect a piece of theater in the tradition of Soviet agitprop, with the message of Israeli wrongdoing pushed down your throat with all the subtlety of Hamas. But the play is far from one-sided. After standing outside the theater with a group in support of staging the show - and in preparation for the COPMA counter-protest that never materialized - I watched The Admission. The play presents both versions of what took place in 1948 with a measure of sympathy for both sides. But what did or did not take place in 1948 in the village of Tantura - called Tantur in the play - was of far less importance than the impact of these events on the lives of people who were born long afterwards. The play's central question is a nagging one: to achieve co-existence, should we bury the past and move on, or dig up the bones and risk fighting those conflicts all over again? The obvious answer is truth and reconciliation, but that doesn't seem to be an option for the time being in Israel, or for that matter in Washington, DC.

The effort to ban this play and shut down a vitally important discussion reflects a deeper anxiety in the Jewish community. For many years, the American Israel Public Affairs Committee (AIPAC) practically monopolized the debate in the United States on Israel. But the perennial desire to resurrect the peace process, the sharp right turn in Israeli government policies under Benjamin Netanyahu, and the foreign policy fallout from eight years of the George W. Bush administration's disastrous meddling in the Middle East have all threatened AIPAC's dominance. Recently it has been dealt several political blows, particularly around U.S. engagement with Iran.

The most significant challenge to AIPAC - and by extension to groups like COPMA - comes from within the Jewish community. Liberal Zionism - with its various facets from J Street on the East Coast to Tikkun on the West Coast - has offered an increasingly vocal counterpoint. Former New Republic editor Peter Beinart has thrown down the gauntlet before the "American Jewish establishment" for its right-wing drift and even supported a modified BDS (Boycott, Divest, Sanction) policy toward Israeli settlements in the Occupied Territories. A rebellion is brewing within the Hillel network of Jewish campus organizations, with several chapters becoming "open Hillels" because of their willingness to engage with controversial topics and speakers that Hillel International has put off limits.

Liberal Zionism faces its own conceptual challenges. Rabbi Brian Walt, for instance, has pointed out the reluctance of liberal Zionists to address systemic injustice inside Israel. "Like many progressive Zionists, I ignored this systemic injustice while acting to repair some of its symptoms: home demolition, uprooted trees, and more," he wrote in Tikkun. "Along with others like me, I also ignored the devastating and hidden evidence of the Nakba: many towns, villages, and kibbutzim that I love in Israel where Israelis live (including close personal colleagues and friends) are built over the remains of Palestinian villages whose residents were banished and whose property was either nationalized or destroyed."

It comes back to 1948. Writing in the Daily Beast, Yousef Munayyer listed the refusal to address the Nakba as one of the three contradictions of liberal Zionism. He points out that "Zionism necessitates a Jewish majority, which it achieved in 1948 through a series of events (including mass expulsion and the flight of civilians from hostilities), and perpetuated by systematically denying the human right of Palestinian refugees to return."

This debate over Israel and Zionism is even more agonized in Israel. Two recent books by Israelis - liberal Haaretz journalist Ari Shavit and radical historian Ilan Pappe - illustrate the debate, at least on the liberal left. This week at Foreign Policy In Focus, Adam Cohen looks at how these books treat the history of Jewish-Palestinian relations.

Ari Shavit's My Promised Land concludes that the Nakba was a necessary evil, even if it "is an integral and essential part" of the Zionist legacy. Ilan Pappe, perhaps the most prominent historian in Israel to argue that what took place in Tantura was a massacre, describes in The Idea of Israel how various movements and individuals have challenged the dominant state narrative in Israel, which has created space for works like The Admission to be staged. Pappe also mourns the more recent narrowing of space for this kind of discussion in Israel. In 2011, for instance, the Israeli government passed the Nakba Law, which allows the state to fine communities or state-sponsored organizations for commemorating the 1948 tragedy.

It is often said that the winners write the histories. But that has changed over the last few decades. Even the winners in 1948 - or their offspring - have begun to tell the stories of those who did not prevail and were thrown off their land. And, of course, the "losers" have more opportunities to tell their own stories. The Israeli government and organizations like COPMA might try to keep the Nakba buried in history or offer only a sanitized, Thanksgiving-like version of this original sin of ethnic cleansing. But the historical works of Ilan Pappe, the plays of Motti Lerner, and the questions raised by many American Jews who refuse to toe the AIPAC line keep unearthing the bones.

The always-faltering Mideast peace process also reminds us that these are not just historical issues. The question that Israel felt that it had settled in 1948 remains a matter to be negotiated, namely its borders as a state and the disposition of the Palestinian inhabitants of the area. Frustrated at the lack of progress in the latest round of negotiations, Palestinian leader Mahmoud Abbas has followed through on his threat to gain the perquisites of statehood by joining 15 international agencies. As an enticement for the Netanyahu government to uphold its side of the bargain and release 104 long-term prisoners, the United States has considered an early release of Jonathan Pollard, in prison for 29 years for selling state secrets to Israel. This kind of horse-trading obscures the much deeper differences in how the two sides look at a conjoined history that stretches back to 1948, and from there to the dust and stones of the archaeological past.

Amid all the disagreements, however, one thing is certain. Progress can only be made through talking. If a work of art encourages that kind of debate, it is part of the solution, not part of the problem. The Admission offers no easy answers. But no one should try to stop it from asking the hard questions.

[John Feffer is the co-director of Foreign Policy In Focus and a playwright.]