Europe: What Is To Be Done?

The Greek election was a warning that, while wealth and political power may be related, they are not the same thing: Governments can be overturned. Europe needs answers. The Greek crisis is a crisis of the entire EU. To one extent or other, every country - even Germany, the EU's engine - is characterized by falling or anemic wage growth, increasing economic inequality, spreading deflation, and an overall decline in living standards. 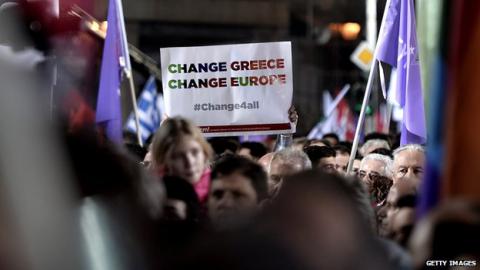 Greek voters supported Syriza's call for change before the election, and even more support Greece and Syriza against the Troika.,Getty Images // BBC News Europe

In the aftermath of last month's Greek election that vaulted the left anti-austerity party Syriza into power, armies of supporters and detractors - from Barcelona to Berlin - are on the move. While Germany's Finance Minister Wolfgang Schaueble was making it clear that Berlin would brook no change in the European Union's (EU) debt strategy that has impoverished countries like Greece, Spain, Portugal, and Ireland, left organizations from all over Europe met in Barcelona to drew up a plan of battle.

As Schaueble was stonewalling Greek Finance Minister Yanis Varoufakis, the Party of the European Left (PEL), along with assorted Green parties, gathered for the - "1st European South Forum" in Catalonia's capital to sketch out a 10-point "Declaration of Barcelona" aimed at ending "austerity and inequality," and promoting "democracy and solidarity."

At first glance, the past two weeks look ominously like September 1914, with opposing forces digging in for a massive bloodletting.

On one hand the European Central Bank (ECB)- one of the "Troika" members, that includes the European Commission (EC) and the International Monetary Fund (IMF) - brusquely denied Greece the right to sell government bonds to raise money. Representatives of the Greek government also got little support from other leaders of EU member countries to reduce Athens-  unsustainable $360 billion debt. Britain's Chancellor of the Exchequer, Gordon Osborne, grimly opined that "The standoff" between the Eurozone and Greece was "endangering the global economy."

On the other hand, the Syriza government made it clear that Greece was finished with the austerity policies that crashed its economy, made more than a quarter of the population jobless, and shredded essential social services. And the Barcelona Declaration is a direct challenge to the economic formulas of the Troika and German Chancellor Angela Merkel: "Merkelism is not invincible. Austerity can stop. Europe can change," reads the document,

Behind the trenches, however, the situation was far more complex than two sides bunkered down in a winner-take-all battle, and the politics around economic policy more fluid than one might initially conclude.

While Greece will certainly not go back to the failed formula of selling off state-owned enterprises, huge budget cuts, layoffs and onerous taxes, neither is it eager to exit the Eurozone. The latter is composed of 18 out of the 28 EU members that use a common currency, the euro. 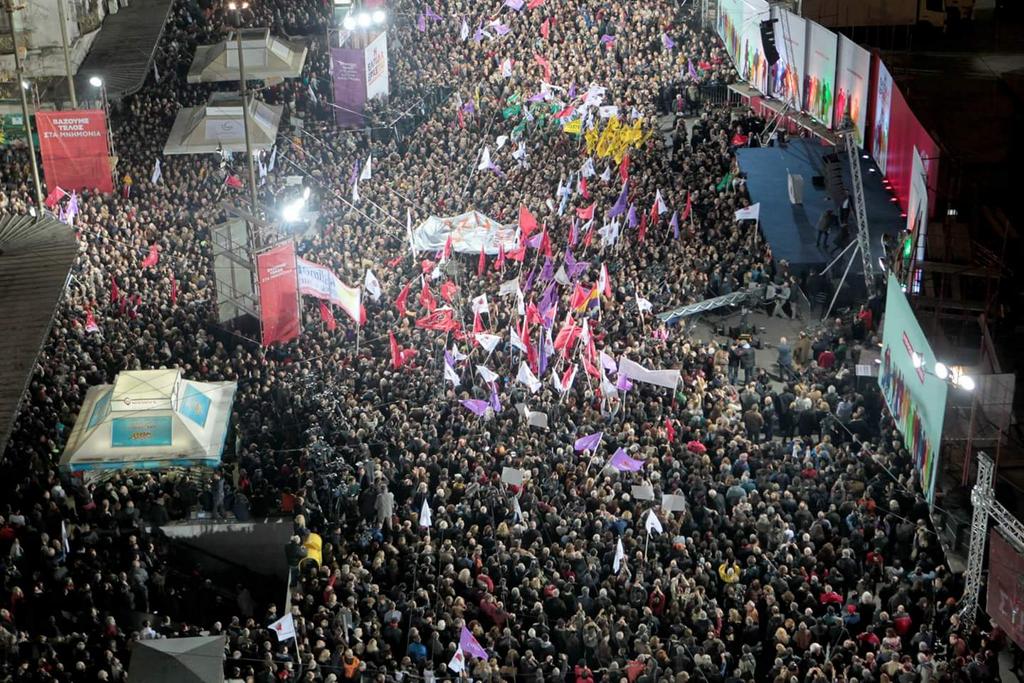 For all the sturm und drang coming from Berlin and EU headquarters in Brussels, Syriza's program is anything but radical, more social democratic than Bolshevik. And a growing number of economists and Europeans are concluding that taking a hard line on Greece might, in the end, endanger the entire EU endeavor.

As a strategy for getting out of debt, austerity has an almost unbroken track record of failure, starting with Latin American in the late 1980s. It has certainly been catastrophic for Greece and, to a lesser extent, Ireland, Portugal, and Spain, and virtually no European country has dodged its impact on employment and social services.

"Austerity" is not just about cutbacks and budget tightening. By increasing unemployment, and introducing "temporary" labor contracts, it severely weakens unions and the ability of workers to bargain for higher wages and improved benefits. Indeed, according to the International Labor Organization, since 2007 wages have either stalled or fallen in most EU countries.

Austerity also accelerates economic inequality. According to the Credit Suisse Research Institute, the top 1 percent now control 48.2 percent of the world's wealth, and inequality in Europe is the highest it has been in a half century. More people are poorer than they were a decade ago, while a few are richer than ever. The latter will be reluctant to moderate the policies that have given them a half-decade of unalloyed profit making.

The Greek election was a shot across the bow for this strategy and a warning that, while wealth and political power may be related, they are not the same thing: Governments can be overturned.

There is the "why not us" devil. The ruling parties in Ireland, Portugal and Spain are spooked, because if Syriza gets a deal on the Greek debt that doesn- t involve crucifying most its population, their own impoverished constituents are going to be asking some hard questions and demanding something similar.

Spain's right-wing Popular Party is nervously looking over its shoulder at the growing strength of the anti-austerity Podemos party. It was no accident that the ELP chose Spain for its conference: Podemos is drawing 24 percent in national polls and is the only party in the country currently growing. It is now the second largest in Spain.  With local and national elections coming up this year - the former in May, the latter in December - Spain's two mainstream parties are running scared.

So, too, are the governments in Portugal and Ireland that went along with the austerity demands of the troika and now face expanding anti-austerity parties on their left.

Another devil is the right, although last May's European parliamentary elections demonstrated that when the left clearly articulated an anti-austerity program, voters picked it over the right. What those elections also showed, however, is that when the center-left went along with austerity - as it did in Britain and France - the right made gains.

There are strong right-wing parties in Denmark, Finland and the Netherlands, although, in the latter two, their poll numbers fell in the European parliamentary elections.

What those last May elections suggest is that any effort to co-opt the right's politics or base by moving in its direction does little more than feed the beast. Greece's experiences are instructive. The neo-Nazi New Dawn Party is also anti-austerity, but Syriza trounced them in last month's election. At the same time, Syriza's warning that austerity fuels the politics of the right is almost certainly true. In an economic crisis there are always those who turn to the dark side and its simplistic explanations for their condition: immigrants, Roma, Jews, and "slackers."

While the European right is worrisome, it has generally lost head-on battles with the left, because the right has little to offer besides the politics of racism and xenophobia.

And Europe needs answers. The Greek crisis is a crisis of the entire EU. To one extent or other, every country - even Germany, the EU's engine - is characterized by falling or anemic wage growth, increasing economic inequality, spreading deflation, and an overall decline in living standards. It is this general malaise that the Barcelona Declaration is taking aim at. 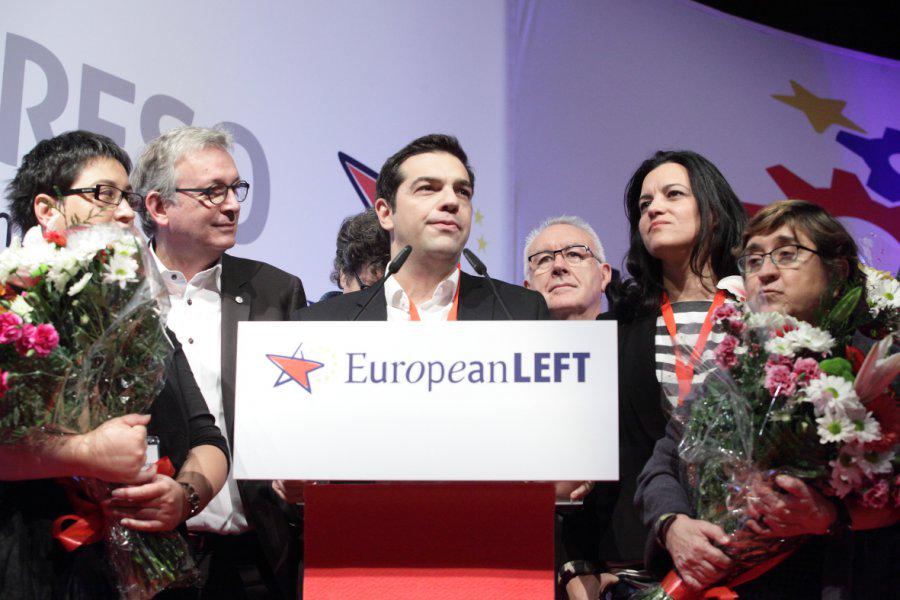 Pierre Laurent, head of the French Communist Party and president of the ELP, told the Barcelona forum that "2015 is a decisive year, the year of change," and that Syriza's victory will "have a huge impact throughout Europe because for the first time since the crisis, it will force all European governments to discuss and alternative to austerity."

The Declaration proposes a program for relieving unemployment, creating sustainable development, expanding credit, resisting "racism and xenophobia," and a European debt conference along the lines of the 1953 London Debt Agreement that relieved Germany of half its post-World War II debts.

How the Greek debt crisis will play out over the next few months is not clear.

The troika may take a hard line, in which case Greece may be forced to leave the Eurozone, a move that Berlin claims would have little impact. Other analysts are not so certain.

"The predominant German view" that a Greek exit would be a "minor shock for the Eurozone and a non-event for the global economy" says Financial Times analyst Wolfgang Munchau, "could not be more wrong."

Faced with a possible meltdown of the European Union or the Eurozone and a growing insurgency on its left, the Troika may blink and give the Greeks part of what they want: a reduction in the interest rate on the debt - maybe even a write-down on some of it - and an extension of the payment schedule. What they will not get - because the Greek electorate has made it clear they will not accept - is more austerity.

That is the contagion - sometimes called the "Greek virus" - that is already spreading to Spain, Portugal and Ireland and which is likely to jump to Italy, France and Central Europe.

The Greeks have shaken the pillars of the temple. Inside the mighty tremble.