Herbert Aptheker, to introduce the man by his highest prestige, was an early scholar of African American uprisings against slavery, and in his middle years, the director and coordinator of the W.E.B. DuBois Papers, one of the great archival triumphs of US history at large. For many in the 60s, through his books and public apperances, a generation became aware of the Communist Party, U.S.A. 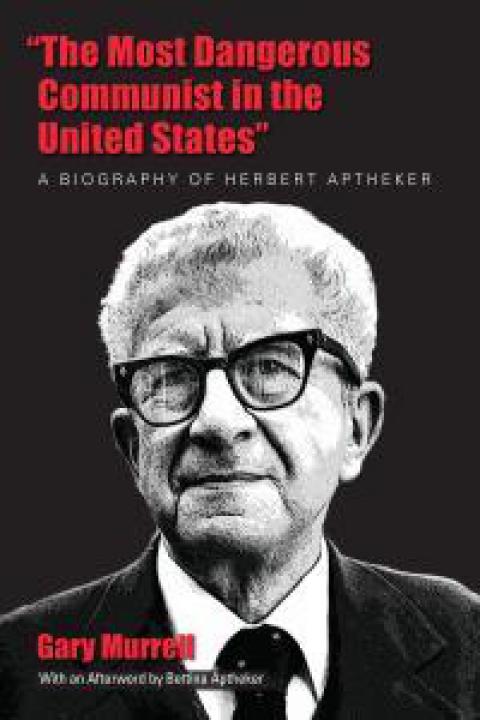 "The Most Dangerous Communist in the United States": A Biography of Herbert Aptheker.
By Gary Murrell, with an Afterword by Bettina Aptheker.
Amherst: University of Massachusetts Press, 362pages
Paperback:  $29.95
August 2015
ISBN:  978-1-62534-154-9

Those with vivid memories of Herbert Aptheker are mostly oldtimers now, the current reviewer among them. And it would be equally true to say that those who knew or met with him, outside of the Communist Party milieu or within, experienced something like mixed feelings. He could be friendly and helpful or stern and dogmatically less-than-useful, and perhaps my own small Aptheker Story underlines the point. In 1976, launching the Oral History of the American Left at the fabled labor history library, Tamiment, at New York University, I naturally scheduled an appointment. He wanted to be helpful. He also wanted to be sure that all my interviews with octogenarian Communists were "cleared" by himself and fellow members of the CPUSA's Historical Commission. (The majority of the interviewees turned out to be with ex-communists, which would surely have made him uneasy.) I thanked him..and found a more flexible senior figure, Gil Green, who made arrangements with the old timers for me. Aptheker, despite his strengths interests, could not quite get beyond the limitations he had imposed upon himself.

Herbert Aptheker, to introduce the man by his highest prestige, was an early scholar of African American uprisings against slavery, and in his middle years, the director and coordinator of the W.E.B. DuBois Papers, one of the great archival triumphs of US history at large. Perhaps he was naturally combative, as the son of an award-winning amateur wrestler and Ukrainian Jewish immigrant rising up in the garment business. The Depression hit the family business hard, and an older brother committed suicide. Erasmus Hall high school student Herbert began studying conditions in the South and even wrote a column on the subject for the school paper. He failed initially to get into Columbia, despite excellent grades, because the university's "Jewish Quota" had already been filled-though he managed to get into Seth Low, the "ghetto" affiliate. He was able to move to the Morningside campus for his degree, but meanwhile, his father had died in a factory fire. At the family funeral, he met his cousin Fay, for the first time in years, and the path toward marriage was set.

Meanwhile, like so many other Jewish youngsters of these years in America's big cities, Herbert Aptheker became politically active in one movement after another. Opposition to Mussolini's invasion of Ethiopia hit a chord, uniting antifascism with antiracism. Today's reader may ask why Aptheker drew close to the Communists (then suffering politically from Stalin's purges, and the 1939 Hitler-Stalin Pact) rather than their leftwing rivals. In reality, the Popular Front Communists and their prolific cultural and social organizations, not to mention their role in the industrial movement, drew well over 95% of everyone newly attached to the Left.  It was easy to be a young Communist in Brooklyn and never meet anyone else on the Left, save for aging socialists. Besides, there was the struggle against Fascism, and until Pearl Harbor, the Party carried most of the weight.

Author Murrell crisply reminds us that the existing mainstream scholarship on slavery, including texts still used in my undergraduate classes of the 1960s, denied the existence of uprisings or even their need. The Growth of the American Republic described servitude as useful "as a transitional status between barbarism and civilization." Thus, to Ivy League historians Henry Steel Commager and Samuel E. Morison, the Original Sin of the slave trade had been overcome! Other historians, including the new wave of liberal historians such as Arthur Schlesinger Jr., were more likely to describe slavery as humanly awful but economically necessary to create the fount of human freedom and example to the rest of an all-too-sodden humankind. Aptheker would have none of it. He even made the notable black historians like Carter G. Woodson nervous by his youthful devotion to Nat Turner's Rebellion.

The author cannot discern from existing documents, and we will never know, what connection Aptheker's anti-racist celebration of Turner's Rebellion had on his becoming a Communist, but his stern condemnation of ex-communists disillusioned by the Hitler-Stalin Pact tells us something. Nothing could convince him then or until late in his life, that the Soviet leadership had made serious mistakes (or worse, committed serious offenses in human rights). Or perhaps he simply went quiet with his own reservations.

His advancing scholarship grew alongside his engagement with W.E.B. Bois' work, marked by admiring phrases but also stinging criticisms of DuBois' claims that slaves had engaged in a General Strike during the Civil War. The presumptuous twenty-four year old would not let an unMarxist analysis go by unchallenged! Du Bois privately urged the young man to keep working. By the time the Japanese invasion prompted the US entry into war, Aptheker was lecturing from New York to Philadelphia on black history and labor. His wartime experiences would prove crucial, twice over. Like the very noncommunist Harvey Kurtzman, later founder of Mad Magazine, Aptheker acted instinctively to protect black soldiers from discrimination, and willingly paid the price. Unlike Kurtzman, whose artwork kept him stateside, Aptheker saw action and may well have saved the life of novelist Nelson Algren (by getting him out of artillery). Ultimately, he helped administer camps for Displaced Persons (DPs, in the slang of the day) and saw the human tragedy up close. This left a mark, perhaps in Aptheker's later unwillingness to accept the libertarian notion of "free speech" for hatemongers.

Back home, he proceeded with his monumental researches, building upon the work of DuBois and Carter Woodson, meanwhile suffering the condescension of more mainstream historians, as the scholarship on African American life inched forward. Some of Columbia's professors disinclined to give him the PhD - because in that long-gone time, acceptance required publication of the thesis by the University itself. Did American Negro Slave Revolts (1943) overstate the number of antebellum uprisings? Not only liberals in the profession, but the totemic scholar of The Black Jacobins, C.L.R. James, clearly thought so. Then again, neither liberals nor James (a Trotskyist of sorts) could, for different reasons, accept Aptheker's version of Marxism as a working tool. Whatever the case, the young scholar was ignored and abused by the history profession, at a time when lesser souls-including a generous cohort of Jewish Americans-- found their way upward to good college jobs and public admiration. His mission, instead, lay in  his own vision of a documentary history of black people. That he eventually poured himself into the tens of thousands of documents lodged in DuBois' files is a testimony to Aptheker's determination and energy.

Like the leftwing writers of Hollywood films, like the leftwing officers of the CIO, like so many others less prominent in American life, Aptheker soon faced the chill embrace of Cold War America. He took no step backward, in face of persecution, and admitting no real faults in the Soviet Union or the CPUSA itself, save those caused by anticommunism. Thereby, he actually rose in status as a public Communist. All this attained a climax later viewed as tragic even by many around him when The Truth About Hungary (1957) vindicated the Russian invasion and occupation. It was Soviet propaganda and not much more. Sadly, so would be his defense of the CP leadership when reformers challenged dogmatists, and then gave up, taking many of the key activists with them, out of the Party. And again, a dozen years later, when Russia invaded Czechoslovkia and pushed out the very socialistic reformer, Alexander Dubcek. Nothing, at least to the outside world, shook Aptheker's faith.

He had high moments as the civil rights movement transitioned into the antiwar mobilization. Staughton Lynd and Tom Hayden joined Aptheker in a notable 1966 journey to Hanoi, even while the American military carried on their amoral bombing. It was his happiest occasion with the New Left and one of the last, on anything like a public basis. Black Power was a turn-off for Party leadership, and Aptheker as well, but so, for that leadership, was the whole specter of women's liberation, gay liberation and the peacenik counterculture.  My own experience, from a few years later, is matched by Murrell's conclusions: wary, Aptheker also badly wanted dialogue, and on a personal level, could be "cordial" (his favorite word to end notes to sympathetic outsiders, like myself, closed "cordially").

He found his consolation in his own continued writing, and in the DuBois Papers. A reviewer in the Journal of American History called the three volume study of the US at large "ho hum Aptheker," and I am afraid that most of us New Left historians agreed. The analysis and conclusions were too pat, the phrases too familiar, the insights lacking in freshness. In retrospect, we could have been kinder, but few of us would actually attack Aptheker, whose work outside black history would be simply put aside, in deference to his accomplishments.

Not enough consolation, perhaps, except that he believed unquestioningly in his work's virtues. The struggle to get the DuBois Papers accepted (U-Mass finally agreed, after more prestigious institutions refused), and the work on the Papers played a central role in much of the rest of Aptheker's life.  He still did not get the academic prestige that he deserved (an aged C. Van Woodward intervened personally to keep Aptheker from a brief appointment lecturing at Yale in the 1970s) but he kept heroically to the task before him.

All this ends with several tragedies. The first was the impossibility of the American Institute of Marxist Studies, founded by Aptheker, to get out of thicket made inevitable by Party leadership.  The second, closely akin, can be described as the unwillingness of the same clique to hear about the consequences of their homophobia, an issue deeply personal as daughter Bettina made her lesbian status known to her father. The last, and most widely discussed in some circles, was Bettina's charge that her father had engaged in a form of sexual abuse through much of her childhood.

In a remarkable Afterword, Bettina Aptheker pays tribute to her mother and her father, without removing the stain of an activity that, she says, he insisted he could not remember.  Did this activity have any role in his scholarship or political activity? Bettina does not think so, and neither does Murrell, so we are left to wonder, or simply let it pass by as another of life's imponderables. The CPUSA toward which he devoted so much of his life had faded irreparably by the time of his death in 2003-Aptheker had been among those who sought to save it from self-destruction after the fall of the East Bloc--but the DuBois project had triumphed, and an army of leftwing scholars, black and white, could testify to the enormity of his accomplishment.