books The Black Cultural Front: Black Writers and Artists of the Depression Generation

Using original source material Brian Dolinar arrives at a different explanation of why the popular front of 30s and 40s broke up, than that of mainstream media of that time, and since. The key agents of disunity were not the Communists but the manifold assault by the rightwing establishment. The US ruling class used opinion-molding Red-scare and Red-baiting campaigns in the mass media and culture. A lesson for today with the re-growth of the radical right. 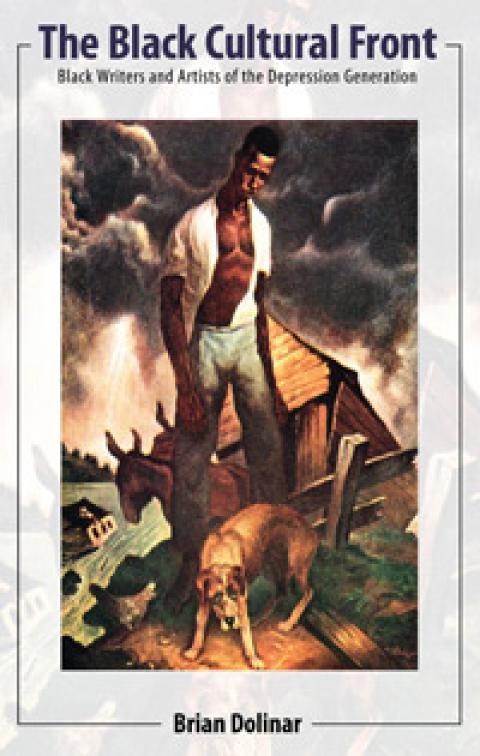 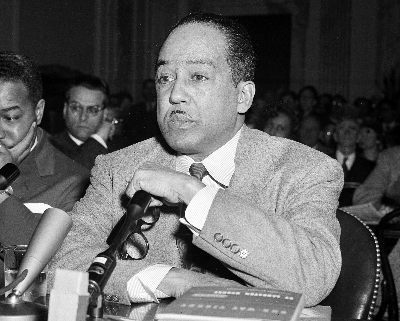 This March 26, 1953 photo shows Langston Hughes speaking before the House Un-American Activities Committee (HUAC) in Washington, D.C.
Credit: AP file photo // Twin Cities (MN) Pioneer Press
But Dolinar brings to light the long-hidden record of a closed-door hearing on March 24, two days before the public one, in which Hughes was as sassy and elusive as Brer Rabbit when the McCarthyites tried to depict him as a Communist dupe. Hughes strongly asserted his creative freedom and his right to criticize racist practices, and he let the committee know that he would identify neither himself nor anyone he knew as a card-carrying Communist. Asked explicitly about Paul Robeson and whether he suspected Robeson was a Communist, Hughes said he had not seen Robeson, his pal in younger days, often enough in recent years to say one way or the other what Robeson's relationship with the Party was.
Dolinar convincingly concludes that instead of kow-towing to the McCarthyites, Hughes, "playing the trickster" like his acclaimed alter ego Jesse B. Simple, was surviving to fight another day. And fight he did. "Despite efforts to shut him up," Dolinar says, "Hughes continued to use his [Chicago] Defender column to protest the atom bomb, address independence movements in Asia and poke fun at un-American committees."
As to why the US government would have targeted Hughes, you need read only Dolinar's illuminating section on Hughes's work as a war correspondent on the anti-fascist side in the Spanish Civil War, writings that aren't generally included in Hughes's anthologized works. Few today will have had an opportunity to appreciate how Hughes and other Black writers and artists attracted rank-and-file Black Americans to large rallies at which they convinced the crowds that the fight of progressive Spaniards was their fight, too.
Himes Kept His Hope in the Labor Movement
Chester Himes took up writing during his seven-and-a-half-year stay in the Ohio State Penitentiary for armed robbery. After his parole in 1936, he could find only low-paying jobs in Cleveland despite having had short stories published in Esquire, the Amsterdam News, the Atlanta Daily World and Abbot's Monthly. He got some writing jobs through the New Deal's Federal Writers' Project, however, and met leftist and Communist writers at Cleveland's Karamu House, a neighborhood center that founded the nation's first Black community theater program.
Despite his obvious gift for writing, Himes, like almost all other African American journalists, photographers, secretaries or pressmen in that era, couldn't get a job on the staffs of any of the almost completely segregated newspapers or magazines of the day. Relocating to Los Angles to see if he could use some Hollywood connections provided chiefly by the Ohio writer Louis Bromfield, Himes later recalled in his autobiography The Quality of Hurt, "When they saw my face [on the Warner Bros. lot] I was finished-period."
Himes then established impressive leftist credentials through his efforts to unionize L.A. factory workers under the threat of anti-union police thugs. He also eloquently defended Chicanos and Japanese-Americans who were victims of relentless bigotry and persecution. Drawing on his own experiences in his first novel, If He Hollers Let Him Go (1945), Himes seems to support general Communist ideals and objectives. The narrative strongly condemns, however, Communists and non-Communists alike who would preserve dual or Jim Crow unionism, justifying their cowardice by arguing that fighting to desegregate trade unions during wartime would hurt the country's military efforts.
American Communists tended to praise If He Hollers, if begrudgingly, but Himes's next novel, Lonely Crusade (1947) drew enraged critiques from CPUSA circles. Himes's protagonist, Lee Gordon, a Black Communist, confronts duplicity, racism, and cynical efforts to exploit him and other African Americans from both the corporate establishment and his fellow, Communist-led union organizers. Himes said of the book: "The left hated it, the right hated it, Jews hated it, Blacks hated it," but that the plot did not "record a single event that I hadn't known to happen."
Dolinar writes that in his "powerful portrait of the Communist Party's failure to adequately address the concerns of Black workers," Himes had, as the scholar Alan Wald argues, "predate[d] other books of Black estrangement from the Communist Party - Ralph Ellison's Invisible Man (1952), Richard Wright's The Outsider (1953) and Harold Cruse's The Crisis of the Negro Intellectual (1967)." But unlike the three Wald cited, Dolinar notes, Himes never "lost all hope in the labor movement," nor did he receive material benefits for his critique of the Communist left or derive career boosts via a cozy relationship with the US's liberal anticommunist elite in the publishing industry and academia. 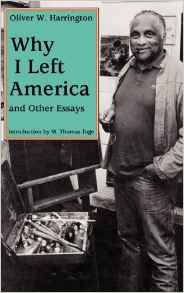