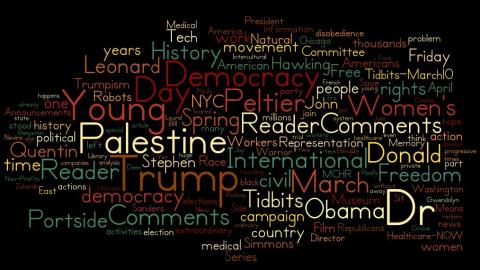 Tidbits - Reader Comments and Announcements - March 10, 2016, Portside
Announcements:
Happy International Womens Day dear sisters and brothers in the struggles for our children and their planet!
Today belongs to us. Don't let the anti-historians dilute International Women's Day, or turn it into yet another "celebration" of women who have "successfully" joined the ranks of those who benefit from, and are enriched by, ever-worsening living and working conditions for the women of the 99%.
Yesterday I watched the faces of my 7th graders light up, when I introduced a mini-research project on Women's History Month. Most had never heard of it, and those strong emerging young women sat and stood stronger, holding the idea with intrigue. Some of the boys took pride in knowing and wanting to share what they had learned. We have an obligation to help our young people learn the history of this day and month, even as the promoters of the status quo try to replace that with platitudes that inevitably will include blessings on the anti-most-women female politicians.
The Working-Class Origins and Legacy of International Women's Day 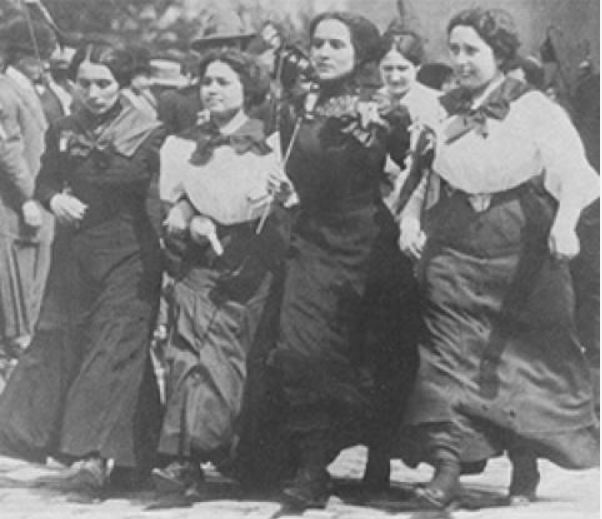 Alicia Williamson
UE News
(Portside post from March 4, 2014)
Kipp Dawson
Posted on Portside's Facebook page
====
Celebrating International Women's Day
We Were There
Theme song, written for a multi-media show by the same name, about women's labor history.  Many thanks to Bev Grant for writing, composing, singing and directing the Brooklyn Women's Chorus.

Warrior: The Life of Leonard Peltier
a film by Suzie Baer
Friday, March 11, 2016   7 p.m.
Although not a new film, Warrior covers the story of Leonard Peltier, an innocent man, locked away for life in the U.S. prison system.  Leonard is a Native American activist and political prisoner, convicted of a crime that he did not commit during a bloody shootout on the Pine Ridge Reservation in 1975.  Around the world, his trial and conviction have been denounced as a sham.
Please join us for this showing of Warrior and sign a letter to President Obama asking that he grant executive clemency to Leonard Peltier.
Friday, April 8, 2016:  Cointelpro 101
Friday, June 10, 2016: Incident at Oglala
Freedom Hall
113 West 128th Street, Harlem
Subways: #2 or 3 to 125th St.;  #4, 5 or 6 to 125th St. and walk west four blocks;
A, B,C or D to 125th St. and walk east three blocks.
NYC Free Peltier  -  nycfreepeltier@gmail.com  -  646 429-2059