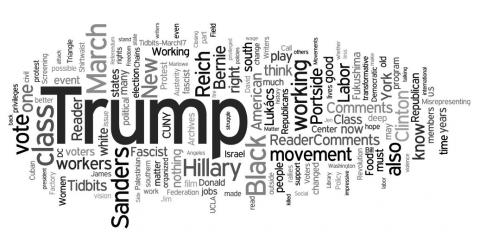 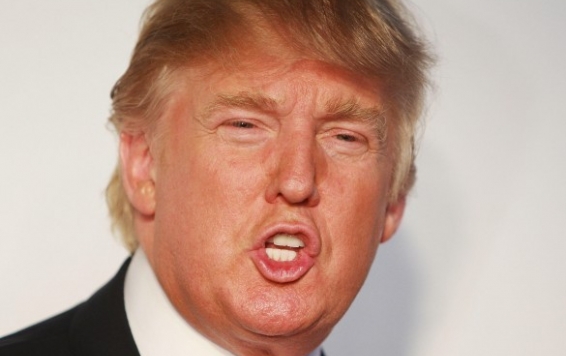 This is a good analysis and while the use of the word fascist is chilling for the reasons Reich states, it fits. I would just point out that the white working class males who are angry and are supporting Trump largely for emotional reasons not because it is rational, are not just having a hard time economically. The progressive vision of the post-war generation which centred around strong democratic trade unions and a supportive welfare state for those who became sick, old or unemployed largely disappeared with the rise of Reaganism and neoliberalism which was negative about government spending and has made the 1% so rich. The blatant smashing of the American labour movement not only removed jobs and protection for many thousands of workers but it robbed them of communities on the job and democratically run organizations which gave them pride and protection.
Trump has no intention of supporting unions, but he is giving some workers a pinch of hope that he will bring back jobs. It is a pipedream; the world has changed but he is savvy as Reich notes. Sanders is also picking up white working class support because he is confirming that neoliberalism is a failure and that the earlier progressive vision was right. In a different configuration, such as fighting climate change by creating new jobs, the progressive vision of Presidents such as Roosevelt can return, and with it better lives and respect for all American workers. His campaign has pushed Hillary a bit left, which is good. The question is who can fight Trump better - Bernie or Hillary? Sanders has started the "revolution" which is funneling some of the anger constructively into a truly reformist platform; Clinton has experience and can sink Trump with detail, and has more Latino and black American support. Perhaps they should become a team at the Democratic convention.
Trump is a disaster but has picked up on the dissatisfaction of many Americans; the Republican Party and the election spending laws are undemocratic, classist and racist.
Laurel MacDowell
====
I respect much of what economist Robert Reich has written in the recent past, and appreciate his endorsement of Bernie Sanders. However, he is going too far to peg Donald Trump as a "fascist".  I don't know if Reich was responsible for posting the pictures showing Trump supposedly imitating the facial expression of Mussolini, but this is something that belongs in Weekly World News, not on Portside.  The hand-raising at a Trump rally that Reich claims as a Fascist display was the crowd response to Trump asking for people to raise their hands as a pledge to vote for him in the primary, not the "Sieg Heil" that Reich and other rather superficial critics imply.  What are those citizens actually there raising their hands to pledge their vote supposed to think?  That they are now considered fascists by Reich etc.  Or that they and Trump are being lied about.  This is not good analysis, and even worse politics.
Trump has said some awful things, but why single out Trump for fascist tendencies?  Other Republican contenders may be worse in that regard.  None of them have good immigration or civil rights positions.  The two closest to him in the polls (Cruz and Rubio) are arguably more hawkish and less likely to negotiate with our so-called "adversaries". The difference between Trump and the other Republicans is not only in showmanship and celebrity, but also that he may have no fixed principles other than property values.  His rivals attack him for inconsistency.  This actually may be better than firmly held bad principles.  I shudder when I think of Cruz with cruise missiles, or the finger of Rubio resting near the nuclear trigger.  But Trump may know the worth of the resulting real estate.
Did you notice that the "demonstrator" scandals blossomed soon after the Republican establishment publicly decided Trump was a major threat to them?  Why are not the other Republican candidates bedeviled by "demonstrators"?  Who are they anyhow?
I wish Reich would stick to his extremely constructive role of explaining why the Sanders program makes economic sense.  And attack the economics behind the Clinton program.  That is a big job on our side of the political divide.  We can't leave it to the Republicans.  Reich as an economist is equipped to do it; instead, he succumbs here to the lack of political oxygen that Trump has managed to create. Leave the Trump innuendos to Republicans as they tear their party apart; don't do their work for them.
Millions of people are discontented with politics as usual. Many now attracted to Trump may switch to Sanders in the final election, should Sanders be nominated.  Let's facilitate that, not impede it by careless insults insinuating they are a fascist movement.
David Ecklein
====
I hope your watchers will note the similarity of the pursing of the lips of Donald Trump  and Benito Mussolini. It brings to mind a verse one of my colleagues wrote to the tune of "V...- for Victory":
Hirohito and Benito
Heard the piper play.
When they looked 'round, the rats were drowned
From Leningrad to Mandalay.
We'll plow under the whole damned crop --
Goering, Tojo, Ciano, von Ribbentrop --
And we'll send the Axis right flat on their backses
With V...- for Victory!
Henry Foner
====
thank you. another Reich we should be studying, is Wilhelm, as in the story here.
aleksandra
(psychoanalyst) 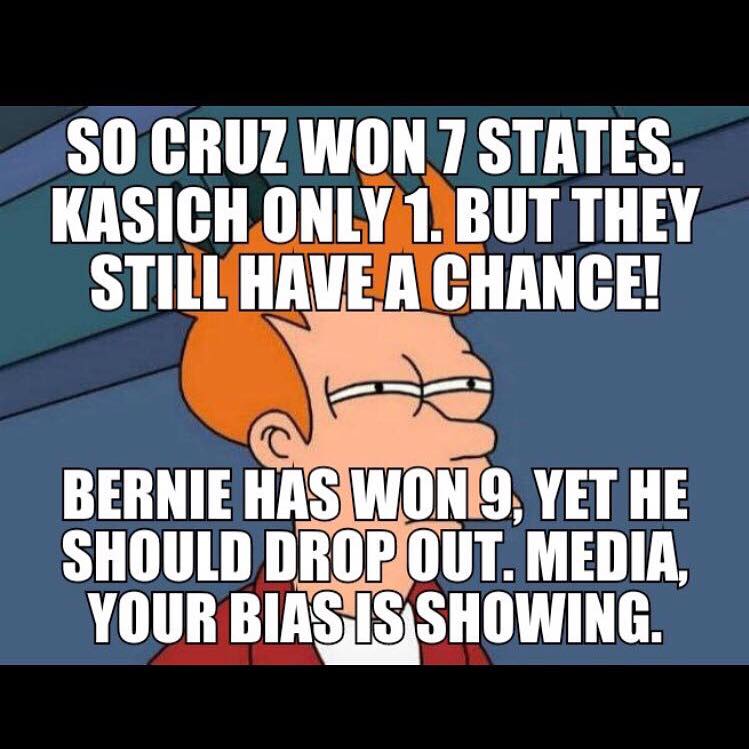 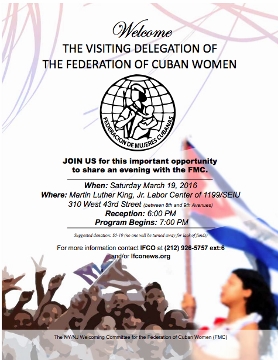 Suggested donation: $5-10
(no one will be turned away for lack of funds)
For more information contact IFCO at (212) 926-5757 ext:6 and/or email us at ifco@Ifconews.org
This event is organized by the The NY/NJ Welcoming Committee for the Federation of Cuban Women (FMC)
Literary Event: CUNY Writers Against Austerity - New York - March 20 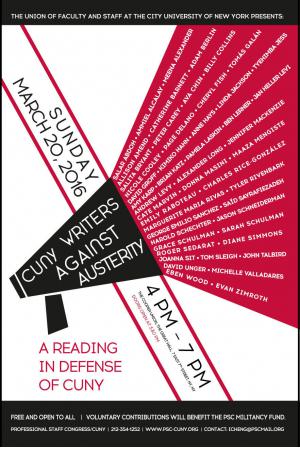 As y'all know, PSC has been engaged in a protracted contract campaign with critical funding for CUNY -- including money for outstanding labor contracts -- being decided in state budget deliberations right now. There have been rallies, coalition building, lobbying, civil disobedience, and now... a literary event.
The union has organized an impressive event, where writers who teach at CUNY will read from their work in The Cooper Union's historic The Great Hall.  It's an impressive lineup of poets, playwrights and novelists, and it's FREE.
Some 50 writers will read short excerpts from their work. The program includes such celebrated writers as Peter Carey, the two-time-winning Booker Prize novelist; Meena Alexander, acclaimed international poet; Billy Collins, former United States poet laureate; and Grace Schulman, recipient of the 2016 Frost Medal.
You can read more about the event here.  You can look at the cool flier and look at the impressive line-up here.
I hope to see you there.
CUNY Writers Against Austerity
The Cooper Union, The Great Hall
7 east 7th Street
Manhattan
Sunday, March 20, 4 pm - 7 pm
FREE - ALL ARE WELCOME - PLEASE SPREAD THE WORD
105th Commemoration of the Triangle Shirtwaist Factory Fire - New York - March 23 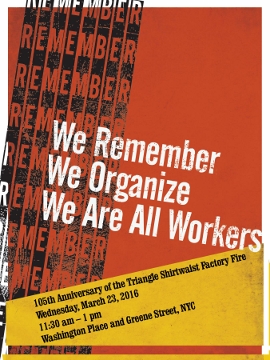 105 years ago this month, 146 workers lost their lives during the Triangle Shirtwaist Factory fire.
This year's commemoration will be held on Wednesday, March 23 at 11:30, at the site of the fire (Washington Place and Greene Street in Manhattan).
Please commit to coming out and bringing members, as we take a few hours to remember the lives that were lost, and the sacrifices that played a major role in helping to enact some of the laws and policies that protect today's workers.
Please RSVP here.
Cara D. Noel
Director of Communications
New York City Central Labor Council, AFL-CIO
212.604.9552
There is a Field: A New Play by Jen Marlowe - New York - March 28 & 29
There is a Field: Play Performance
Monday, March 28 & Tuesday, March 29 -- 7:00PM
World Room, Columbia Journalism School
2950 Broadway, at 116th Street
Manhattan 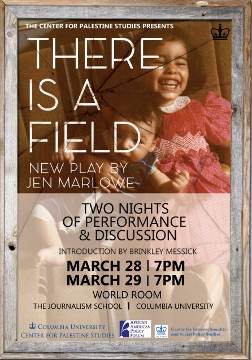 THERE IS A FIELD is a play about Aseel Asleh, a 17-year old Palestinian citizen of Israel killed by police in October 2000. Based on interviews and primary sources collected over fourteen years, the play offers a uniquely personal lens for understanding inequality as the root of state violence and impunity.
This two-night run of the play is part of a larger Land Day Tour, across 20 U.S. universities, to coincide with the 40th anniversary of Land Day, a commemoration every March 30th since 1976 of Palestinian land expropriated by Israel.
About the play
As the Second Intifada erupted in the West Bank and Gaza, demonstrations also began in Palestinian villages and towns inside Israel. In October 2000, Israeli forces killed twelve unarmed Palestinian citizens of Israel in these demonstrations. The youngest of those killed was a 17-year old boy named Aseel Asleh. There Is A Field, written by Jen Marlowe, is a play about Aseel's life and his killing, through the perspective of his older sister, Nardeen. Through Nardeen's struggle to cope with the murder of her brother, the play also addresses the larger struggle facing Palestinians inside Israel.
Open to the public, $10-20 suggested donation, no one turned away.
RSVP here for March 28, 2016.
RSVP here for March 29, 2016.
Sponsored by the Center for Palestine Studies; Co-sponsored with The African American Policy Forum and The Center for Intersectionality and Social Policy Studies.
"Food Chains" Film Screening - Washington, DC - April 1 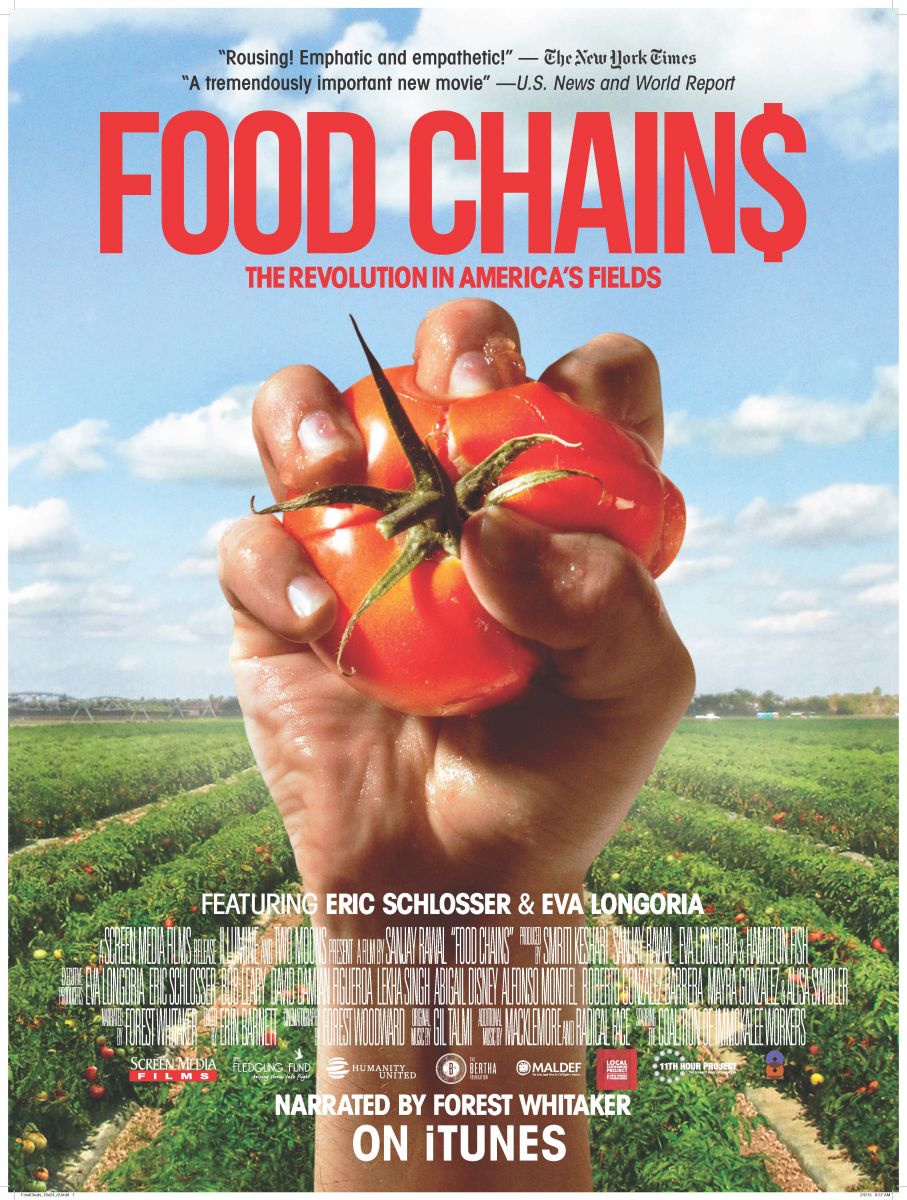 Join the UCLA Labor Center's 2016 banquet as we celebrate the movement for worker justice in Los Angeles. Together, we have helped to advance worker rights, we have recruited a new generation of young leaders into the labor movement, and together, we have fought for economic justice and against wage theft.
This work is possible only with your partnership, your encouragement, and your support.
Thank you for being part of the UCLA Labor Center family.
REGISTER NOW
Contact Shukry Cattan for any questions at 213-480-4155 x247 or scattan@irle.ucla.edu