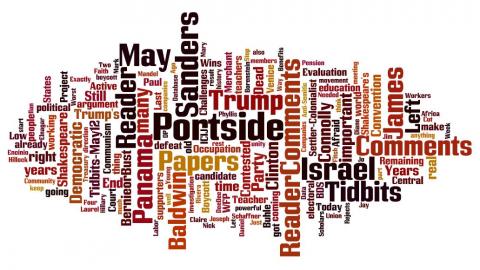 Tidbits - Reader Comments - May 12, 2016, Portside
Re: Contested Convention Is Exactly What the Democratic Party Needs; Sanders Would Be Trump's Worst Nightmare - Two Views
Interesting articles on the Dem electoral process--the second is a STRONG argument that Sanders would be a much more successful candidate against Trump than Clinton. Seems like the Superdelegates are going to have to choose for the party or for Hillary, because the party AND Clinton are a forth coming disaster.
Kim Scipes
Posted on Portside's Facebook page
====
A contested convention can only happen if there is no winner after the first vote. I'm not sure what is to be gained by ignoring this simple fact.
Mark Boslough
Posted on Portside's Facebook page
Re: Why "#BernieorBust" Is A Dead End
I agree completely with Ochoa. There are two related questions that must be considered in any political campaign: What will it take to defeat the enemy, and what development may result in our own defeat. In this campaign the imperative to defeat Trump requires unity of all Democrats, independents and, yes, those Republicans disaffected by Trump's candidacy. Assuming that Hillary Clinton becomes the Democratic nominee, the development that could result in victory for Trump  is for Sanders' supporters to split off into a third force or simply stay at home. We got eight years of George W. Bush thanks in no small measure to Ralph Nader. What's the old saying:  "those who don't study history..."
Seymour Joseph
Re: Trump, Racism and the Left in 2016
Very good wake-up call
Diane Fentress
Posted on Portside's Facebook page
====
The thought of Trump winning the Presidency and having a Congress dominated by the Republicans is truly terrifying. The right would be entrenched and could move in a very repressive direction fast. So continuing pressure from Sanders is important as is the challenge to Democratic Party rules that are undemocratic. But once the Democratic candidate is chosen unity is essential as are electoral challenges at all levels to the right.
I note that Trump is already trying to encourage Sanders supporters to jump to him. Very sad! If Sanders had a chance at the nomination many current Trump supporters who have responded to Trump's demagoguery and anti-trade treaties policy would possibly go to Sanders.
This is a hugely important election that will define the direction of the US for some time. The world is watching nervously.
Laurel MacDowell
Re: Why James Baldwin Still Matters
I didn't encounter much of Baldwin until I was 23 and The Fire Next Time.  He swept me beyond the Beats into a moral morass that I'm still working on and sorting out.  Changed my life.
Jim Young
Harrisburg, PA
====
Back in 1965, I happened to be living in Milan, Italy, & Baldwin came to town & gave a talk in the biggest theater there.  He made a tremendous impression - through an excellent translator - and was the buzz for days among the students & left-wingers in general.
Matthew Borenstein
Re: Boycott Is the Only Way to Stop the Israeli Occupation
There is ALWAYS more than one way.
Phyllis Mandel
Posted on Portside's Facebook page
====
Is Levy seriously suggesting that Israel is a democracy??
Mary Jo Robertiello
====
As with South Africa during the apartheid era, we need a list of products that the average citizens can refrain from purchasing. In addition to divestment.
Louis Reyes Rivera
====
I believe in the boycott weapon.  There are hundreds (maybe thousands) of people who have helped direct and win boycotts in the U.S.  Maybe we should organize   a three day conference to put together an effective boycott of Israel and its products.
Nick Jones,
Boycott Director for United Farm Workers in the 1970's
Re: Ilan Pappe: Israel Is the Last Remaining, Active Settler-Colonialist Project
Israel isn't going to do the right thing, so the rest of the world has to shame Israel into doing the right thing just as we did with South Africa.
Rudolph Greenidge
Posted on Portside's Facebook page
====
I heard him speak at the Rachel Corrie Foundation in Olympia WA last week and he is amazing
Judith Kolokoff
Posted on Portside's Facebook page
Messages to Portside

My friends think I'm so well informed -- which I am thanks to your work. Truly critically important and so very well done, Portside. Thank you!
Kipp Dawson
Posted on Portside's Facebook page
Posted on Portside's Facebook page
====
I'm seeing Portside for the first time, and am intrigued.
Dvorah Kost
Posted on Portside's Facebook page
Re: Who's Afraid of Communism?
A web site about an historic conference held at Harvard in 1988 looks at the many ramifications of anti-communism
DeeDee Hillock
====
a powerful piece passed on from our friends at Portside. From my own experience as someone coming from a family with no leftwing anything, meeting old (mostly ex-) old reds was discovery a cultural, labor and political movement badly flawed in many ways, but also the real history of the Left from 1920-50, at least 90% of the Left.
Paul Buhle
Posted on Paul Buhle's Facebook page
Re: Treasury Department Rejects Teamsters' Central States Proposal to Cut Retiree Benefits
(posting on Portside Labor)
Musicians, Singers, Actors, Dancers, Stagehands, Construction Workers, Electricians - this impacts us. Members of the AFM, SAG/AFTRA, AGMA, IATSE, various craft unions - we are also members of pension plans that are multi-employer. We face the same issues that impacted the Central States Teamster Pension Plan - drop in investment income; large numbers of vested plan members and those already drawing pensions at a higher rate than those who are currently working (depending on the work and the lack of organizing), results in smaller contributions coming in while the outflow for those already retired is higher.
Jay Schaffner
Posted on Portside's Facebook page
====
We discussed this at our May meeting. Retirees got a reprieve.
Community, Faith and Labor Coalition
Indianapolis, IN
Posted on Portside's Facebook page
Re: The Big News in the Union Rift Over the Working Families Party
(responding to earlier Portside post)
I think this is wishful thinking. I see no evidence that the WFP is anything more than the liberal wing of the DP.
A true test will be if the DP candidate is Clinton. Will the WFP endorse this tool of Wall Street?
Note that the UFT, now endorsing Clinton, had the guts not to support Cuomo while the WFP did.
Not optimistic. Fusion is bullshit.
David Berger
Posted on Portside's Facebook page
Re: Poster of the Week: Daniel Berrigan and Bob Fitch Presente!
Both were patriotic freedom and peace seeking warriors; both were important. We shared many humane values and supported many of the same political and social causes.
Philip Encinio
Posted on Portside's Facebook page
Re: Teacher Challenges Low Evaluation in Court and Wins
I have no words.
I taught for years, and suffered all this absolute crap.  Only the folks who make a living preparing these damn tests benefit.  All this nonsense about one-size-fits-all education...
Put some real money into education, make parents turn off the TV sets, take the junk food out of school lunches, insist that teachers get the respect they deserve, and then there will start to be some real learning going on inside classrooms, and we teachers won't have to SPEND OUT OF OUR OWN POCKETS for materials the taxpayers should be providing.
Just my opinion...
Romi Elnagar,
MLIS teacher-librarian for 18 miserable years in Morongo USD and East Baton Rouge Parish Schools
Re: Four Hundred Years Later, Scholars Still Debate Whether Shakespeare's "Merchant of Venice" Is Anti-Semitic
(posting on Portside Culture)
And how many angels dance on the head of a pin?  It's a specious argument. The issue is not what Shakespeare himself meant. It certainly would be true that anti-Semitism existed in Shakespeare's time.   The important thing is how people have chosen to interpret it and turned it into an industry.  Let the Bard keep inspiring us with his plays and poetry. Let Academia keep fighting to find the truth among themselves and leave the rest of us alone to enjoy.  Or I guess we can all start a Protest Movement every time The Merchant of Venice is produced in our community.
Again, it's a specious argument.  Mostly irrelevant and stupid (spelled with a double "o.")
Claire Carsman
Breaking: ICIJ Releases Panama Papers Companies Data 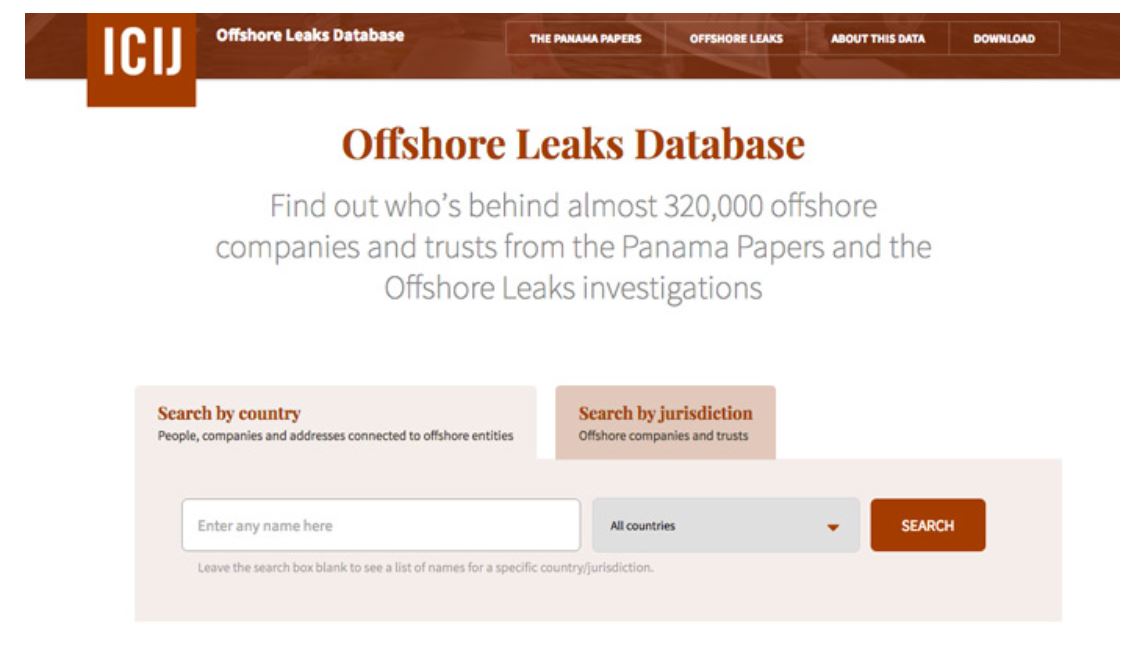 Click here.
Explore the Panama Papers companies
The International Consortium of Investigative Journalists has published a searchable database that strips away the secrecy of nearly 214,000 offshore entities created in 21 jurisdictions, from Nevada to Hong Kong and the British Virgin Islands.
The data, part of the Panama Papers investigation, is the largest ever release of information about offshore companies and the people behind them. This includes, when available, the names of the real owners of those opaque structures.

Click here.
ICIJ, part of the nonprofit organization the Center for Public Integrity, has spent more than 12 months investigating the 11.5 million files that make up the Panama Papers, working with and assisting more than 370 reporters from all around the world. Your support helps us continue our investigation, and helps journalists hold the powerful to account.
Today in History - 100 Years Ago - James Connolly was Murdered

Click here to watch on Facebook.
Today marks 100 years since James Connolly, an Irish socialist leader, was killed by British forces.
Connolly's efforts in the Easter Rising ignited a larger movement. Ultimately 26 counties got their independence, though Ireland was divided.
Thanks to teleSUR English for this post on Facebook