The disgraceful history of voter disenfranchisement is no secret. For more than a century, African Americans (and other marginalized groups) were restricted or evendisqualified from voting. Today these practices are formally outlawed, yet we still see patterns in voter turnout that indicate that voting discrimination is alive and well. Non-voters also tend to be younger, less educated, and less affluent than their voting counterparts. 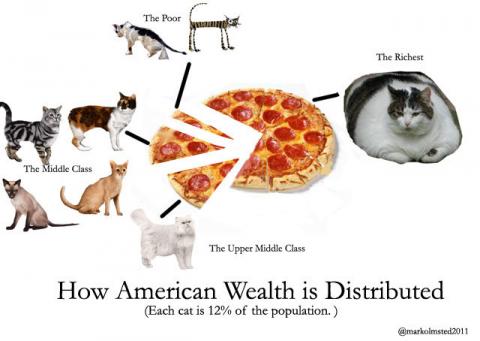 "I figure the best way to convey income inequality in this country is to use two things Americans love: pizza and cats.", credit: Mark Olmsted // Huffington Post

Economic inequality in the United States appears to be trapped in a vicious cycle, as shown by several new working papers published today by the Washington Center for Equitable Growth alongside other recent research. Non-white, lower-income Americans are far less likely to vote than wealthier white citizens, and much of this participation gap is due to discriminatory practices at the ballot box. As a result, the political interests of lower-income minorities are not well-represented, and these interests are vastly different than those of their voting counterparts. This in turn means that policy decisions are made that exacerbate economic inequality and the inequalities that limit citizens’ voices in the first place.

To figure out how to break this cycle, social scientists need to understand what is happening at various points along the political continuum. So, let’s first examine new and existing research on the vote.

The disgraceful history of voter disenfranchisement is no secret. For more than a century, African Americans (and other marginalized groups) were restricted or evendisqualified from voting. Today these practices are formally outlawed, yet we still see patterns in voter turnout that indicate that voting discrimination is alive and well. When looking across race and ethnicity, for example, data demonstrates that non-voters are predominantly African American, Hispanic, Asian, and other ethnic minorities. Non-voters also tend to be younger, less educated, and less affluent than their voting counterparts.

These trends are, in part, related to deep-seated institutional marginalization through practices including ballot access restriction—long lines, voter identification laws, andchanges to polling sites—and voting dilution. But individual behaviors may play an important a role in generating voter turnout disparities, too. Recent research shows that attitudes toward civic engagement may be developed long before a citizen reaches voting age.

According to a new working paper by Sarah Bruch from the University of Iowa and Joe Soss from the University of Minnesota, enduring negative peer-to-peer relationships and authoritative interactions between 7th through 12th grades lowers the odds of civic engagement and electoral participation later in life, and also reduces future trust in government. Non-white students are disproportionately more likely than others to endure these negative interactions, suggesting that school environments may not only add to existing social inequalities but also contribute to inequalities in civic engagement and democratic participation.

Without a vote, the voice of diversity goes unheard

The absence of equal political participation translates into unequal policy voice. If wealthier white citizens had similar policy preferences to their lower-income, minority counterparts, then the participation gap would not necessarily be so troubling. Yet evidence suggests that voters’ policy preferences in the United States continue to vary sharply by race and income in ways that imply that a functional democracy needs to give equal voice to these various groups in order to be truly representative.

Just how different are these preferences? A recent report from Demos unpacks how net support for policy changes based on a variety of demographic characteristics. Using 2012 election data from the American National Election Study, Demos finds large discrepancies between the public opinions of white voters and non-white non-voters and between rich voters and poor non-voters. White voters supported more spending on the poor by a margin of 5 percentage points, for example, while non-white non-voters and poor non-voters supported these same measures by a margin of 50 percentage points. On the question about whether the government should reduce inequality, there were diametric oppositions between the two groups, respectively.

Perhaps unsurprisingly, the policy preferences of non-white, lower-income non-voters—economic policies that address on poverty and inequality—are already seldom the focus of congressional attention. Analyzing mentions of terms such as economic growth, inflation, poverty, inequality, deficit, and unemployment in the Congressional Record between 1995 and 2012, researchers Peter Enns at Cornell University, Nathan Kelly and Jana Morgan at the University of Tennessee, and Christopher Witko at the University of South Carolina find in their new working paper that Congress prioritizes the interests of the upper-class largely because they dole out political resources in the form of the all-important political campaign contributions necessary for re-election.

The four political scientists note that economic inequality increased during the period of their study while over the same time period congressional “nonresponse” to inequality or redistribution also increased. In fact, the term inequality was mentioned only 80 times in a year at its highest point compared to 30,000 mentions of “deficit,” an issue the authors note is of much greater concern to the wealthy than to the working-class.

Without a voice represented through the vote, the likelihood that issues of economic inequality are elevated in this skewed congressional climate is slim.

When the voice goes unheard, the policies that could change that go unheard, too

With Congress evidently uninterested in issues of economic inequality, it should come as no shock that the actual policies that have a tangible impact on minority and low-income voters struggle to pass. Take the minimum wage. William Franko of Auburn University and his co-authors Kelly and Witko find that changes in election rules at the state level, particularly those that limit the voice of already-marginalized voters, are associated with economic inequality. Specifically, the researchers observe that high levels of class-biases in voting make states less likely to pass minimum wage increases, and as these class-skews in voter turnout grow, states become less prone to pursuing other policies that could reduce inequality.

The same pattern is apparent when it comes to the issue of taxes. Christopher Faricy of Syracuse University finds in his new working paper that increases in public conservatism—ideologies that often don’t represent the voice of minorities—correlates with a reduction in tax progressivity. In other words, there are lower levels of social spending and lower taxes on the rich.

Without policies such as the minimum wage or progressive taxation put into practice, the tools we have to combat the economic inequalities that disproportionately burden minorities and other vulnerable groups are limited.

How do we break the inequality trap?

These recent findings suggest that inequalities seem to beget inequality writ large. As University of Oregon economist and Equitable Growth grantee John Voorheis, along with Princeton University’s Nolan McCarty and Georgetown University’s Boris Shor, show in their paper, increasing income inequality in the United States is associated with even more political polarization and gridlock, which, in turn, makes addressing inequality through public policy more challenging, too. As Faricy puts it, we’re witnessing an “inequality trap.”

So, how do we break the cycle and escape the trap? That’s a complicated question with an even more complex answer.

Expanding the franchise might be a good step. Through measures such as automatic registration, weekend voting, voting by post, reduced I.D. requirements, increased language accessibility at polling sites, and same-day registration, we can reduce the barriers to accessing the polls. Early interventions programs in schools may also play a role in changing the culture around disparate civic participation. But an equally important step, as Nick Carnes of Duke University points out in his new working paper, is reducing political gatekeeper biases and recruiting more working-class and minority candidates to be on the ballot in the first place.

In conjunction, all these efforts may work to ensure more people can voice their vote and vote their voice for the people and policies that help promote equity.

[Kavya Vaghul is a Research Analyst at the Washington Center for Equitable Growth. Prior to joining Equitable Growth, Kavya worked as a consultant for the City of Redmond, Washington and served as a legislative intern with Senator Maria Cantwell of Washington state. Kavya graduated from The Johns Hopkins University in 2013 with a degree in Public Health with concentrations in statistics and international development.]