The rule is "a blatant political attack on a group of workers that are 90% women and majority people of color,” said April Verrett, president of SEIU Local 2015, which represents some 380,000 California home care and nursing home workers. 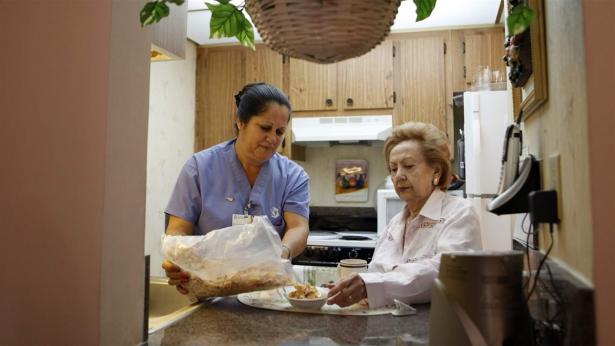 Under a new Tramp administration rule, independent home health aides funded by Medicaid can no longer elect to have union dues deducted from their paychecks.,Lynne Sladky/The Associated Press

Public-sector unions, struck last year by a U.S. Supreme Court decision that ended their ability to charge non-members fees, suffered another blow this month when the Trump administration blocked hundreds of thousands of Medicaid-funded home health aides from deducting union dues from their paychecks.

California, Connecticut, Massachusetts, Oregon and Washington state and, separately, the Service Employees International Union (SEIU) sued the Trump administration earlier this month over the new regulation, which they say also will stop the workers from making payroll deductions for health insurance premiums and training costs.

In their suit, the state attorneys general, all Democrats, said the rule will disrupt their longstanding labor arrangements and make it harder for home care professionals to work together to improve their jobs and better serve their elderly and disabled clients.

The move comes after the Supreme Court’s Janus ruling last June held that it’s unconstitutional to require a government employee who is represented by a union but not a member to pay so-called agency fees to support union operations, including lobbying. The ruling didn’t affect Medicaid-funded home care workers, because the court already had banned unions from charging them agency fees in its 2014 Harris v. Quinn decision.

The new Centers for Medicare and Medicaid Services (CMS) rule forbids states from diverting Medicaid dollars meant for providers to third parties, such as other companies or organizations. It’s expected to affect payroll deductions for home care workers who don’t have a conventional employer, because they’re paid by the state but hired and fired by their clients.

State lawyers and administrators have begun parsing how the rule will affect home care services when it goes into effect in July. Union officials are trying to figure out another way for workers to pay dues, such as asking them to mail a monthly check.

CMS says the new rule repeals an Obama-era regulation unsupported by statute and that it won’t prevent home care workers from unionizing or accessing benefits. “Practitioners may continue contributing to unions or other organizations. This rule merely forecloses the ability of a practitioner to assign a portion of his or her Medicaid payment to a union,” the final rule said.

The agency declined to comment on the lawsuits it now faces. “As a matter of policy we do not comment on active litigation,” CMS spokesman Johnathan Monroe said in a statement emailed to Stateline.

Union leaders say the regulation is part of a larger right-wing effort to undermine collective bargaining and unfairly targets a vulnerable group. “It is a blatant political attack on a group of workers that are 90% women and majority people of color,” said April Verrett, president of SEIU Local 2015, which represents some 380,000 California home care and nursing home workers.

Verrett said her team will find other ways for members to pay dues. But, she said, the rule change could affect Local 2015’s bottom line.

“When you talk about each of them having to figure out, on their own, a way to make that deduction without it coming out of their paycheck it’s onerous,” she said. “And it would impact the resources of the local, and therefore the power of our workers.”

Her members pay an average of $38 a month to the union, she said. CMS estimates that the rule could redirect as much as $71 million in Medicaid payments away from third parties.

“Home health aide” is one of the fastest-growing occupations in the United States, with demand increasing along with the aging population.

In 2016, almost 3 million home health and personal care aides were employed nationwide, and the federal Bureau of Labor Statistics estimated that the profession would grow by nearly half in the next 10 years.

Aides — who earn on average $11.57 an hour, BLS data shows — help their clients bathe, dress, eat and do household chores such as laundry and shopping.

While some aides work for agencies, many participate in state programs that are funded by Medicaid but allow beneficiaries to choose their own aides, including friends or family members.

Independent home care workers began to unionize and agitate for better wages in the 1990s. Today at least eight states have recognized independent home care worker unions and allow the unions to make dues and benefit deductions from workers’ Medicaid paychecks, according to the Freedom Foundation, an anti-union, free-market think tank with offices in Washington state, Oregon and California.

In 2014, CMS issued a regulation that formally approved the arrangements states had made. But now the agency says it never had the legal authority to do so.

More than 60% of the over 7,000 public comments submitted to the agency as it weighed the change appear to be form opposition letters submitted by union supporters.

Other comments, urging the agency to go after unions, arrived from anonymous writers, such as the Texas resident who wrote, “Public employee unions have got to be the dumbest conception in the recorded history of mankind. Please help to eliminate them.”

The National Right to Work Legal Defense Foundation, an anti-union nonprofit based in Springfield, Virginia, argued that under the current system Medicaid money is being siphoned off to powerful interest groups such as unions. “Federal funds that are supposed to be paying for care of the disabled are instead being used for political purposes,” wrote William Messenger, a staff attorney for the nonprofit.

The SEIU and other public-sector unions have long been aligned with the Democratic Party and routinely donate to Democratic candidates for state and federal office. The SEIU and its affiliates donated over $28 million to federal candidates in 2018, according to campaign finance data compiled by The Center for Responsive Politics, a Washington, D.C.-based nonprofit.

“You can pay a bill every month,” Semmens said, “it’s not something that’s particularly difficult.”

Democrats, unions and their supporters contend that it’s not so easy to require workers who live paycheck to paycheck to pay union dues and make other outlays for benefits by cash, check or credit card.

In their lawsuit, the Democratic attorneys general noted that only 40% of California independent home care workers paid by Medicaid receive their wages through direct deposit, implying that many don’t have good access to the banking system.

“The suggestion that workers should simply buy stamps and envelopes to mail their contributions for voluntary health, retirement and union dues on a monthly basis is unreasonable,” the lawsuit said. “No other type of worker is expected to go without the convenience and reliability of direct payroll deposits.”

The rule could make it difficult for the roughly 50,000 workers SEIU Local 1199 represents in Massachusetts to make pretax contributions to a retirement savings account via a payroll deduction, said Rebecca Gutman, vice president of home care for the union’s state chapter.

Local 1199 — which also represents workers in Florida, Maryland, New Jersey, New York and Washington, D.C. — has been pushing to enable such accounts in their contract negotiations with Massachusetts officials, she said.

Massachusetts officials also have told her team that the new regulation could affect their ability to provide workers’ compensation and unemployment insurance to home care workers, also known as personal care attendants, she said.

“If Massachusetts cannot use Medicaid funds to purchase workers’ compensation for [personal care attendants], they will not be able to continue to provide critical homecare to some of our most vulnerable residents,” said Margaret Quackenbush, spokeswoman for the Massachusetts Attorney General’s Office, in an email to Stateline.

A year after Janus, the 10 largest public-employee unions lost about 300,000 fee payers but gained over 130,000 members and ended the year on better financial footing, Politico reported earlier this month.

“We lived through the Harris v. Quinn decision, we will live through this rule change, and our members are strong, and resilient, and indeed powerful,” SEIU Local 2015’s Verrett said. “We aren’t going anywhere. But that does not make it right that our members are being singled out in this way.”

Stateline, founded in 1998, provides daily reporting and analysis on trends in state policy. Its team of veteran journalists combines original reporting with a roundup of the latest news from sources around the country.