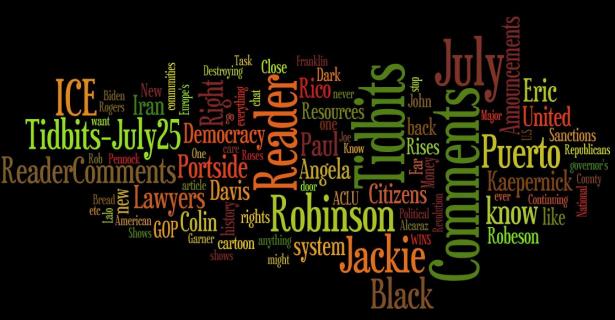 Re: America's Deadly Wealth Pyramid: Eric Garner Stood His Ground and was Crushed for It (Claire O'Connor)
Smothered Justice  --  cartoon by Rob Rogers
Re: How Far Will Republicans Go to Destroy Democracy? And Can They Still Be Stopped? (JD Scot; Gordon Galland)
Deja Vu All Over Again? YIKES!  --  cartoon by Lalo Alcaraz
Re: Puerto Rico Rises (Christopher Peragine; Ellen Cantarow; Ignacia Olvera)
Re: Puerto Rico's Privatizers Are Finally Getting What They Deserve (Philip Specht; Ileana V. Perez-Negron)
Re: Blood on Our Hands: How We Help Drive Immigration North (Dan Jordan; Beth Emma Goldman; Mary Putera)
Unions  -- A Major Inconvenience For Those  -- Bread and Roses poster
Re: The 5 Biggest Lies Joe Biden is Telling about Medicare for All (John Case)
Re: Half a Century Before Colin Kaepernick, Jackie Robinson Said, ‘I Cannot Stand and Sing the Anthem.’ (Brent Raycroft; Diego F Perez; Larry Katz; Priscilla Kay Mason; Michael Pennock)
Re: How America Came Heartbreakingly Close to Universal Healthcare (Eleanor Roosevelt)
Re: Code Pink's Medea Benjamin On What's Really Happening in Iran (Kendle Leiter)
Re: What Sanctions Mean for My Iranian-American Family (Eric Niederkruger)
Re: The American Dark Money Behind Europe’s Far Right (Timothy Close)
Re: In Patriarchy No One Can Hear You Scream: Rebecca Solnit on Jeffrey Epstein and the Silencing Machine (Jim Watson)
Re: John Paul Stevens Was Right: Citizens United Opened the Door to Foreign Money in U.S. Elections (Eric Bengston)
Re: Tree Planting 'Has Mind-Blowing Potential' to Tackle Climate Crisis (Daniel Millstone)
Re:  The Dark Side of the Moon Mission (Charles Ostman)

Re: America's Deadly Wealth Pyramid: Eric Garner Stood His Ground and was Crushed for It

This piece is fantastic. What a wonderful example of placing daily reality into the system that creates and perpetuates it. 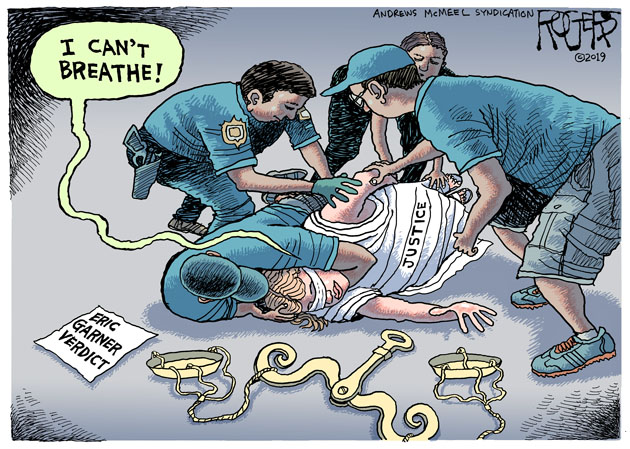 Re: How Far Will Republicans Go to Destroy Democracy? And Can They Still Be Stopped?

Republicans= beady beady little eyes and can never ever be trusted! The article has brought forth truths I already knew, starting from the Nixon administration to the present!

With Trump's latest "go back to where you came from" pronouncement, the GOP is coming out of the closet.

Ere long, they'll say "We support a welfare state; but for whites only. We oppose abortion, but only of white babies; abortion of mud babies, whether pre- or post-natal, is A-OK!"

Deja Vu All Over Again? YIKES!  --  cartoon by Lalo Alcaraz 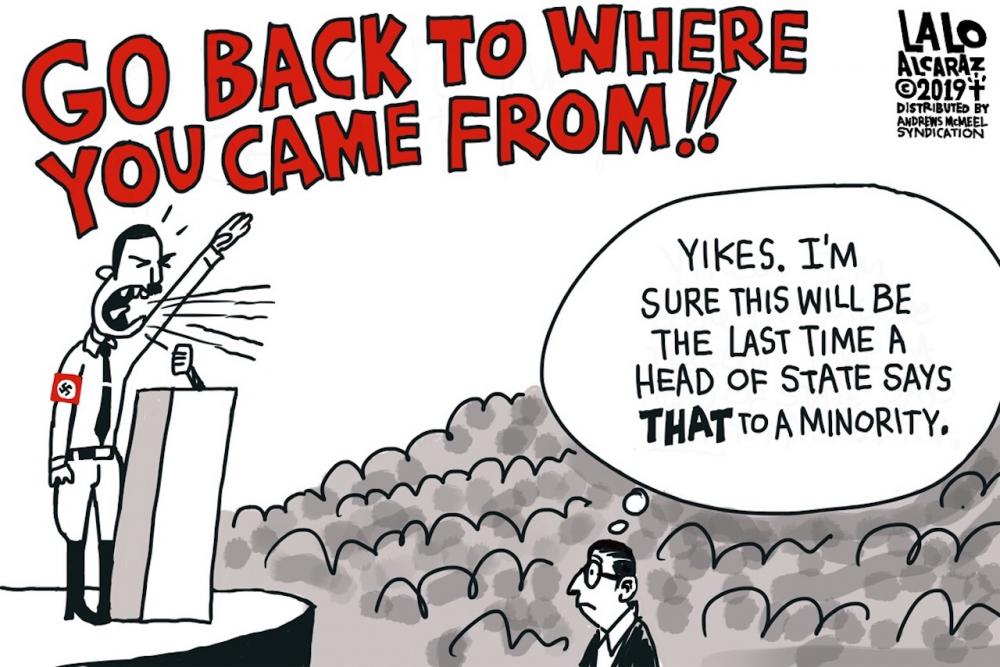 " ... Groups like the Colectiva made it into the governor's chat, in the form of disparaging references, because they had effectively held the government to account for its neglect of the crisis of gender-based violence. Yet their struggle is not limited to gender. Rather it aims at enacting an anti-systemic praxis that simultaneously targeted neoliberalism, colonialism, capitalism, patriarchy, and racism.

What Puerto Ricans witnessed in the governor's leaked chat is how class power conspires to put the governor's boys club and the interests they defend in power, while keeping the rest of the population in their service. The movements and organizations that were disparaged in the chat were targeted because they threatened this system. It is our duty to support and build on the efforts of these movements, who withstand attacks, precarity, and exhaustion in their struggle. ..."

Amy Goodman had an excellent program on this last week. (Democracy Now.)

That is only part of it. He also called women whores and he called men cock suckers . He laughed at our dead people who are still in forensic from the hurricane Maria victims of not dealing properly with the peoples needs. He hid the water sent as emergency aid so people would have to buy it from supermarkets that raised prices etc etc etc...

Re: Puerto Rico's Privatizers Are Finally Getting What They Deserve

"Keleher, who is not Puerto Rican, is accused of using her position as secretary of education to give her associates preferential treatment in the awarding of bloated government contracts. One of the companies that she is accused of favoring was the "only company not qualified for the contract, and was the worst applicant" according to the indictment."

We want justice for all our kids!!!!

Re: Blood on Our Hands: How We Help Drive Immigration North

Here's at least one reason for refugees.

"We hear endless calls for more resources to stop illegal entry at our border. But where are the calls to stop the massive illegal transfer of weapons fueling the very violence that drives innocent people to leave their homes?"

The bigger picture of how the elected officials of “We The People” and therefor We... are criminalizing the bodies of others rather than letting go of the benefits we gain unjustly...

Unions  -- A Major Inconvenience For Those  -- Bread and Roses poster 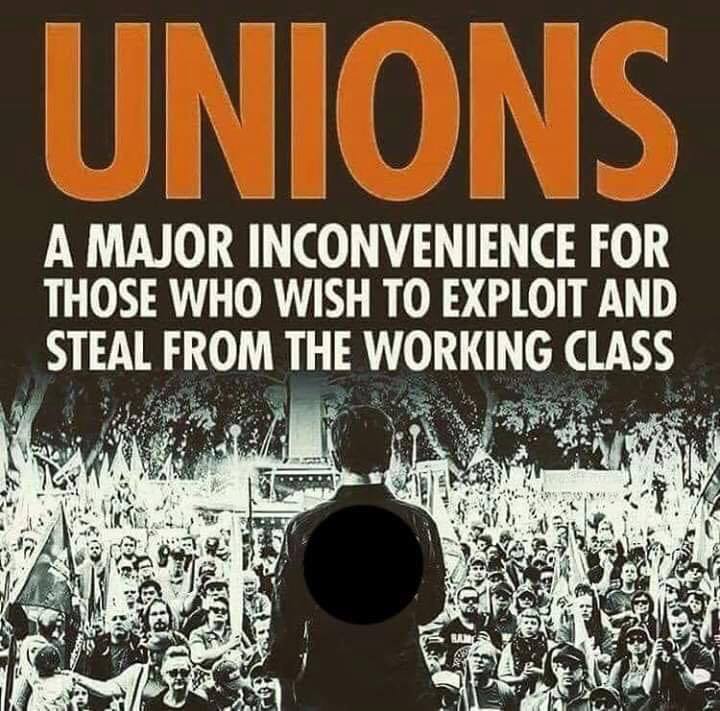 Re: The 5 Biggest Lies Joe Biden is Telling about Medicare for All

A socialist US health care system, like single payer, is more rational than a mixed system, like the one we have.

However, what has really been said in such a sentence? "rational" sounds objective, but it is nonetheless a subjective expression. So the comparisons here are between an ideal and real system, not two ideals. In the realization of a socialized system, Biden's remarks may, or may not, turn out to be lies.

I have a quiz too. I like to call it the "Utopian Socialist" quiz.

"What is the word that best describes the confiscation without compensation of the lions share of the 3rd biggest concentration of US capital, deeply entwined with corporate and financial capital?"

Re: Half a Century Before Colin Kaepernick, Jackie Robinson Said, ‘I Cannot Stand and Sing the Anthem.’

Thanks — never knew about this. There’s a Canadian chapter in the story, too ...

Jackie Robinson and the Montreal Royals (1946)

Excellent article and overview of both Paul Robeson AND Jackie Robinson.

Met Jackie Robinson. Shook his hand. Always admired him, as a ball player. Back then didn't know about the history behind this story. But now, do appreciate it, and Jackie remains a hero, for numbers of reasons.

We've Come A Long Way Except We Have Not.

Things I did not know about Jackie Robinson.

An aside - my grandfather’s cousin, Herb Pennock, is in the baseball hall of fame. Pitched for the Babe Ruth-era NY Yankees. Then was general manager of the Philadelphia Phillies. In that role he, a good Quaker, led the charge to keep Robinson out of the Major Leagues.

Re: How America Came Heartbreakingly Close to Universal Healthcare

Liquidate the AMA. Expropriate the insurance industry. Nationalize all hospitals.

Bottom line. Rich capitalist republicans want to get their greedy hands on Iran's resources for nothing and line their pockets with " more " wealth, materials, and power.

Re: What Sanctions Mean for My Iranian-American Family

Sanctions in Iraq after the first Gulf war killed one million children of starvation in ten years. Famously, Madelyn Albright said it was worth it. Sanctions punish and kill innocent civilians. The U.S. has regularly used them to force countries into war with us out of desperation. Venezuela is a good example of this cruel and inhumane tactic.

Re: The American Dark Money Behind Europe’s Far Right

Many are clueless about the hard right in Putin’s Russia. The reaction, white supremacy and xenophobia, along with homophobia and anti-Semitism that they and the Orthodox Church are leading.

Re: In Patriarchy No One Can Hear You Scream: Rebecca Solnit on Jeffrey Epstein and the Silencing Machine

Interesting read. Bottom line we allow monsters and predators to go about their business unchallenged.

Exactly! Worst single SC decision of my lifetime and the most destructive to the country.

Re: Tree Planting 'Has Mind-Blowing Potential' to Tackle Climate Crisis

The idea of reforestation as a climate change strategy is not new but that doesn't diminish its strength. Here, via Portside, is a report of some (essentially back of the envelope) calculations which show that large scale tree planting could make a huge difference. Of course forests don't take care of themselves. In the UK the Orchard Project partners with community groups and corporations to plant fruit trees. The groups care for the trees and harvest the fruit. On the huge scale proposed here, foresters would be needed.Further, of course, the creation of new forests would create economic demand for wood products.

Re:  The Dark Side of the Moon Mission

Does everything that has ever occurred in history have to be extruded through the narrow, brittle mandrel of perpetual civil unrest, political correctness and so on . . . 24/7/365 ? It might be possible, just maybe, that there has been and will be significant moments in history which are truly remarkable. It seems like this article is struggling to grasp at anything that can somehow cast a dark shadow over one of the greatest moments in human history.

Oh well . . . I understand, that's far too logical. I know, anything and everything must be cast in evil dark conspiratorial shadows, no matter what it was or what the actual truth might be. Have you ever considered this sort of perpetual castigation of everything forever might actually be hurting your credibility, on focusing on real issues of civil rights that really do warrant that type of scrutiny? Ever hear the story about "the little boy who cried wolf"? Warning: independent thought, critical thinking will be required to answer these questions. OK, never mind, just an idea . . .

A new wave of ICE arrests is expected to begin this Sunday in at least 10 cities across the country. We're fighting back by suing to stop mass deportations of refugee families. Here's what you can do to fight back in your community

Now more than ever, we need everyone to know: WE HAVE RIGHTS. 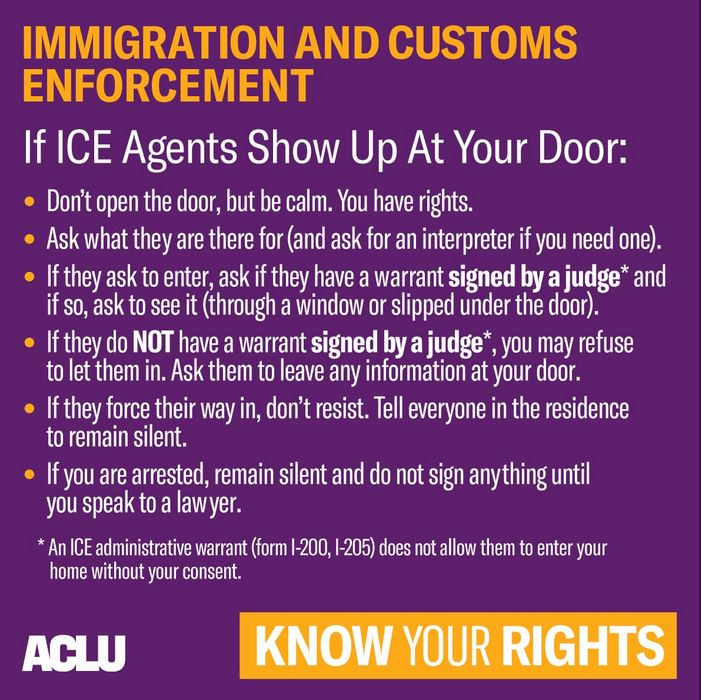 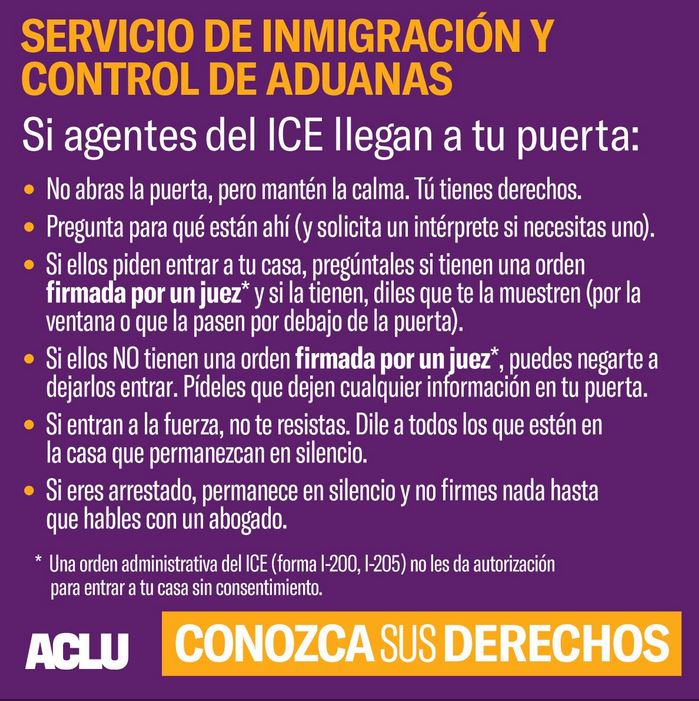 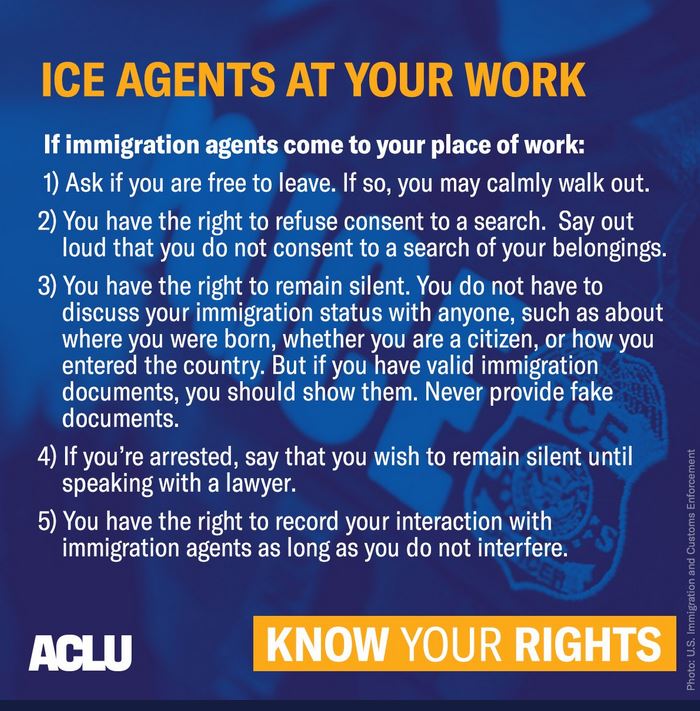 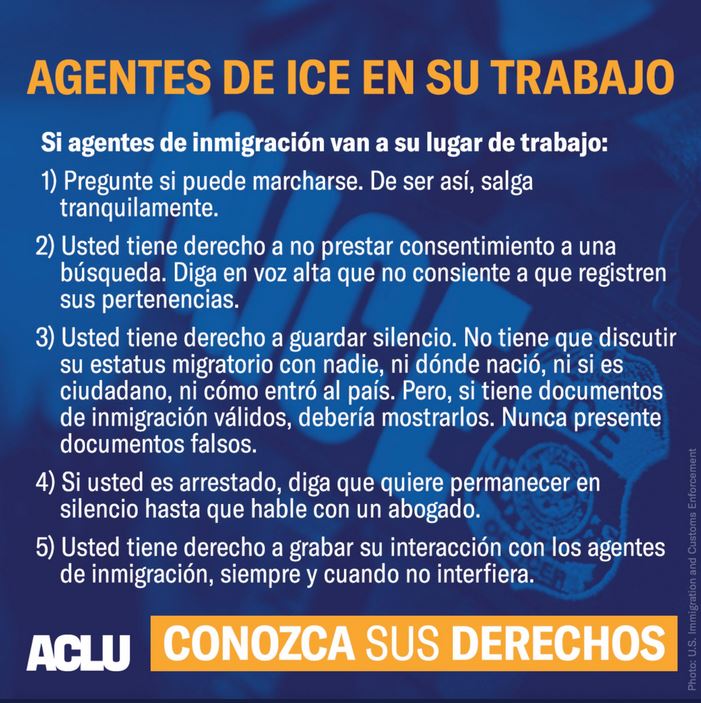 Know this: We don't have to open the door if ICE comes knocking. If the agents don't have a warrant /signed by a judge,/ then we can refuse to let them in. We have the right to remain silent. And we shouldn't sign /anything/ before speaking to a lawyer.

ICE raids are nothing new. But for over two years now, the Trump administration has been terrorizing our communities at a new level – tearing thousands of families apart, spreading fear and hate. If this isn't the kind of country we want to live in, then we must keep fighting to defend our communities.

The best way to fight back? Know your rights. And help your family, friends, and neighbors to know theirs.

Spread the word on Facebook and Twitter so we all know what to do if ICE shows up. Our communities are diverse, so we've translated our guide to 8 languages that encompass most of the undocumented population. *

Thanks for taking action,

WHO WILL TAKE RESPONSIBILITY FOR OUR FUTURE? 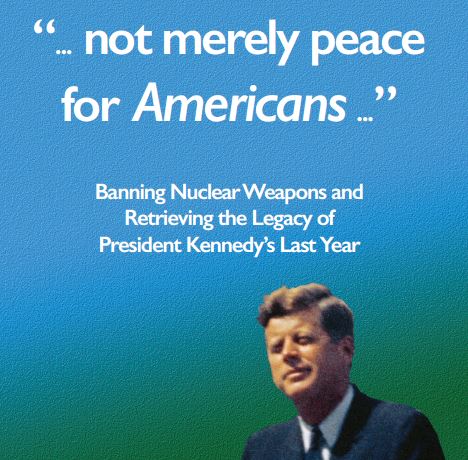 This pamphlet is a product of the
Peace Task Force 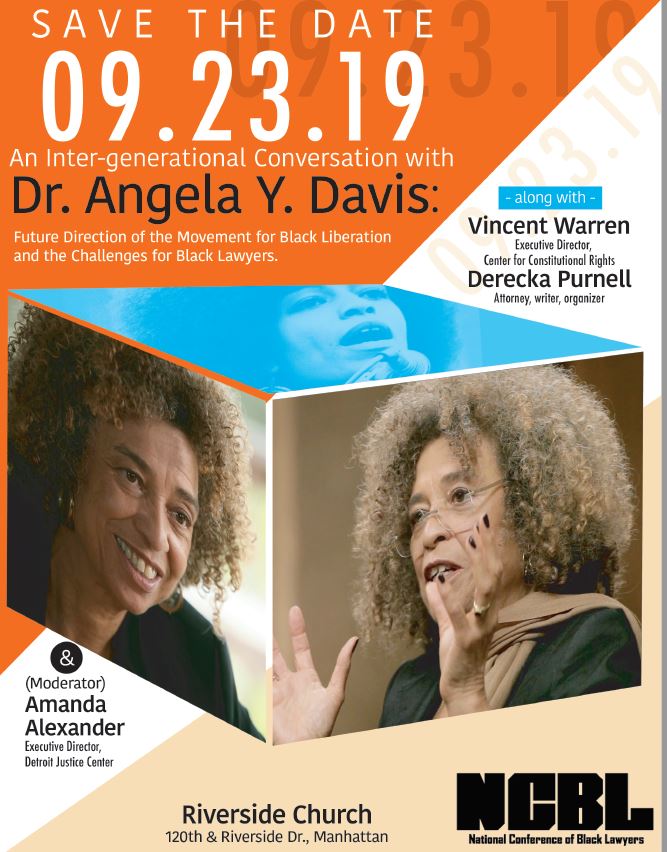