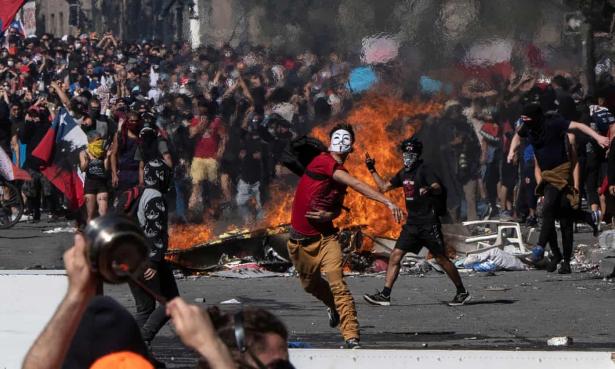 A movement birthed in the shantytowns of Port-au-Prince has now swelled to broad swaths of the populace in all 10 of Haiti’s geographical departments.

Jana Nakhal of the Lebanese Communist Party talks about the resilience and steadfastness of the people of Lebanon, the history of organizing that led to the current protests, and the way forward.

The protest violence -- widespread looting, arson and clashes with the 20,000 security forces deployed on the streets -- is the worst to hit Chile since the country's return to democracy after the 1973-1990 rightwing dictatorship led by General Augusto Pinochet. (NOTE: More details on strikes and protests in Chile are here and here.)

Police opened fire on demonstrators opposing a new constitution that could allow President Alpha Conde to run for a third term.

The Kurdish YPG's battle with Islamic State, with men and women from a multitude of different religious and ethnic groups fighting side by side, made them highly popular around the world.

Indigenous communities and social movements stood up to the president and the IMF—and won.

Demonstrators in Khartoum and other cities called for the former ruling party to be dissolved and for ex-officials to be put on trial.