How to Answer the Question, ‘Do You Recognize Israel’s Right to Exist?’

Prioritizing the state as worthy of relief, as something to which we automatically owe deference, subsumes life to the imperatives of capital. 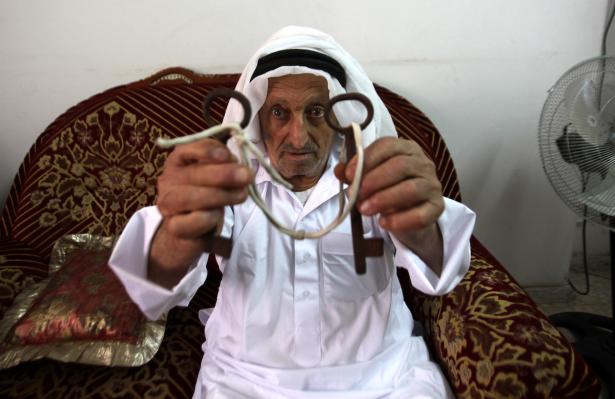 Palestinian refugee Abdulrahim Saad, 82, holds the keys of his former house in the city of Lod as he sits at his home in the West Bank refugee camp of Askar, near Nablus, May 13, 2015. , Nedal Eshtayah/APA Images

When anti-Zionists discuss the Middle East, the topic of Israel’s existence rarely arises.  It’s almost exclusively a pro-Israel talking point.  We’re focused on national liberation, on surviving repression, on strategies of resistance, on recovering subjugated histories, on the complex (and sometimes touchy) relationships among an Indigenous population disaggregated by decades of aggression.  That a colonial state—or any state, really—possesses no ontological rights is an unspoken assumption.

“Do you recognize Israel’s right to exist?” pretends to honor the downtrodden, but it is an altogether different proposition, transforming sophisticated ideas of liberation into a crude test of political respectability.  Prioritizing the state as worthy of relief, as something to which we automatically owe deference, subsumes life to the imperatives of capital.

The fundamental goal of the question is to attribute a sinister position to dissidents.  It accomplishes that goal even when the dissidents haven’t promoted destruction.  Mere defense of Palestinian life is enough to evoke the settler’s existential fear.  For people socialized into orthodoxy, Israel is synonymous with progress, technology, and production.  Affirming its existence is an endorsement of the status quo; no matter how ludicrous as a moral premise, in capitalist spaces it is a perfectly sensible demand.

There are plenty of reasons to eschew the demand.  The first reason is practical:  we don’t advocate for the destruction of human communities, but of ideologies conducive to racism and inequality.  It’s both insidious and unethical to conflate Jewish people (of any national origin) with the existence of a violent, rapacious polity.  That sort of conflation is a grave disservice to activists and intellectuals devoted to a better world—and to the communities for whom a better world is a necessity of survival.  Nobody has ever asked me to affirm another nation-state’s existence, a demand I would likewise decline. Zionists constantly single out Israel for special treatment.

Moreover, it is remarkably impudent for champions of a state founded on the destruction of Palestine and now in its eighth decade of ethnic cleansing to ask the victims of its malevolence for recognition.  Even worse, recognition is only the tip of the demand.  We’re also being asked to legitimize apartheid and ignore the routine commission of war crimes.  The upshot is to validate Israel as a militarized object of Western imperialism—in other words, to affirm the existence of a deeply antihuman entity.

Let’s consider the demand in context of North America, where it’s most frequently issued.  Those of us operating in this geography haven’t the authority to abdicate nearly 80 (and arguably 100) percent of historical Palestine.  It’s not any Westerner’s prerogative to relinquish Palestine under the pressure of a spuriously humanistic insistence by Zionists that their perfidy be excused because it will somehow make us more responsible citizens.

I am happy, eager even, to affirm the right of Jewish people to live in peace and security, wherever that may be, a right all humans deserve in no particular order of worthiness.  But I won’t ratify Israel’s bloody founding or its devotion to racial supremacy.  Ultimately, when Zionists demand that you affirm Israel’s right to exist, what they really seek is affirmation of Palestinian nonexistence.

Beyond these philosophical, political, and practical factors, there’s a worthy psychological reason to refuse the demand.  Zionists are the bully in this supposed conflict and enjoy nearly universal support in centers of political and economic power.  They have more funds, access to corporate media, and the backing of the US military. Palestinians, however, hold one form of power that doesn’t require money, platforms, or weaponry:  the ability to withhold legitimacy from Israel.  It is a small power, without a material apparatus, but it is power, nevertheless, one that only a fool or opportunist would relinquish.  When an oppressor makes submission the basis of civic responsibility, insolence is the only dignified response.