To paraphrase Antonio Gramsci, what serves the class in power is viewed as the natural order and common sense, and what doesn’t is blasphemy. 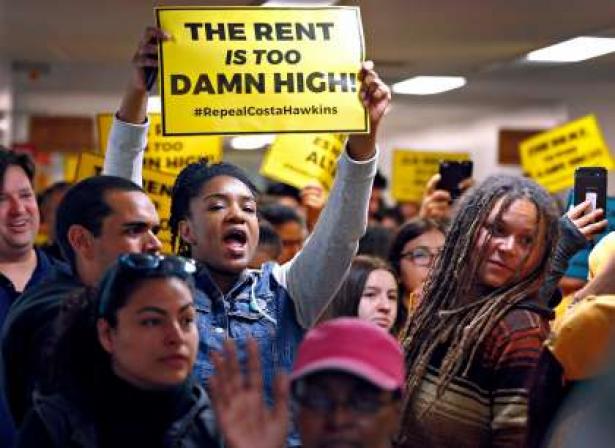 Rent control may be back on California ballot in 2020,SF Chronicle

Senate Bill 50 failed to pass on a close vote in the CA State Senate.  It’s defeat resulted from opposition by progressive State Senators – primarily from LA – over the threat of gentrification, and by local governments over the loss of local control.  Supporters maintained that denser development of market rate housing on transit corridors would alleviate the affordable housing crisis.  The vote reflected the class divisions over the impact of increased housing production for the wealthy. It only helps them, and not the rest of us.

The bill was rejected 18-15 on January 30, falling short of the 21 votes it needed to advance to the State Assembly. Several members abstained from votes during both days of debate.

“This is not the end of this story,” said SB 50 supporter Sen. Toni Atkins (D-San Diego). “Now it is time for all sides to step up… Everyone will need to get ready to come to the table. A housing production bill will succeed this year.”

SB 50 author Sen. Scott Wiener (D-San Francisco) said “We have a policy in California that it’s not a priority to have enough housing for those who need it. Restrictive zoning puts a hard cap on our ability to get out of this housing crisis.”

Of course that’s all a giant fallacy based in the corporatist myth that unchecked market rate housing development with lower the cost of housing for all.

Sen. Holly Mitchell (D-Los Angeles) said promises of future affordability measures and anti-gentrification stipulations already added to the bill weren’t enough to address the concerns of both renters and homeowners in areas impacted by redlining and other segregationist policies.”

Sadly, in terms of ending the housing affordability crisis, the tempest over SB 50 is largely beside the point. Only strong rent control – vacancy control – can significantly create, and preserve, affordable housing.  In passing the Costa-Hawkins Act, the State Legislature ‘preempted’ the right of California localities to enact vacancy control.  Until Costa-Hawkins is overturned, either by a legislative vote or passage of a statewide ballot proposition, all of these other conversations are besides the point.  Somewhere Antonio Gramsci, an Italian Marxist is smiling.

The market in a capitalist system doesn’t work for the 99% of us. For affordable housing, or for health care. To think it does is voodoo Reaganomics. To paraphrase Antonio Gramsci, what serves the class in power is viewed as the natural order and common sense, and what doesn’t is blasphemy. It’s ‘simply’ the ‘law’ of supply and demand. On virtually all issues, the opposite is the case – the market serves the rich 1% and hurts the rest of us, unless it’s impact is mitigated by progressive social and economic policies. That’s the real common sense.

State Senator Scott Wiener’s (D-SF) SB 50 would encourage the higher density development of market rate housing along “transit corridors”. In urban areas like San Francisco, that’s pretty much the entire City. The market trope states that the answer to the housing crisis is the building of more expensive housing to “release the market pressure”. That’s dead wrong. San Francisco’s housing stock is one-third homeowners, two-thirds rental. The answer to our crisis is strong rent control – vacancy control. Vacancy control – limits on rents whether a unit is occupied or vacant. Just like Medicare for All is the answer to the health care crisis – unless you’re an insurance company.

SB 50 is a gift to for-profit developers, and a burden to our neighborhoods. It’s a housing ‘opportunity’ for the builders of market rate units, upper income residents, and any wealthy new arrivals. It’s a burden for low, moderate and middle income people, mostly people of color, and especially tenants. SB 50 and its pro-profit policies would hurt almost all young and old people. It would pour gas onto the fires of gentrification – and increase displacement of lower income people and people of color.

Additional market rate housing development will only make the problems of gentrification and the lack of affordable housing worse. Unbiased studies have supported this analysis. Tim Redmond of 48 Hills cites the new study by eminent economic geographers Andrés Rodríguez-Pose and Michael Storper that argues against looser zoning rules as a solution to the housing crisis.

“We now argue that policies such as blanket upzoning, which will principally unleash market forces that serve high income earners, are therefore likely to reinforce the effects of income inequality rather than tempering them … There is virtually no evidence that substantially lower costs would trickle down to the lower two-thirds of households or provide quality upgrading of their neighbourhoods, but it undoubtedly would enhance displacement in neighbourhoods currently at the boundary of higher-income inner metropolitan areas. Indeed, according to Zillow data reported in The Washington Post (August 6, 2018), rents are now declining for the highest earners while continuing to increase for the poorest in San Francisco, Atlanta, Nashville, Chicago, Philadelphia, Denver, Pittsburgh, and Washington, noting that a boom in luxury construction in these areas has failed to ease housing market competition for cheaper properties.

In any event, all types of lower-income households in prosperous regions pay the price of ‘displacement’ in competing with higher-wage workers who benefit from upzoning to gentrify neighbourhoods, as they occupy its newer, higher quality housing.”

Even the new development of much vaunted affordable rental housing, largely by non-profit corporations, has little impact on the overall problem. The City has built many affordable homes, and far more market rate units. Housing costs continue to skyrocket. Clearly new housing development at any level of affordability isn’t the answer.

Wiener is a brilliant politician, and a corporatist pig. He’s great on the ‘cultural’ issues – like GLBTQ and some women’s rights. He’s horrible on economic and class issues.

Some housing ‘experts’ argue that filling single-family neighborhoods with 4 and 6-plexes will reduce housing costs. That would remove relatively more affordable existing units and replace them with market rate units.  Market rate rents are too expensive for any but the top 10%.  Not-In-My-Backyard (NIMBYs), who opposed any and all development, aren’t the only ones opposing S.B. 50.  It’s a bad idea.  The answer is strong rent control.  In cities with few buildable sites, the “highest and best use” for those lots is affordable rental housing built by non-profit developers.  We should remove as much housing as possible from the market pressures.

Tim Redmond says it best (because he agrees with me) in 48 Hills:

“(SB 50) does not offer a penny of state money for affordable housing. It doesn’t do anything to mandate that cities limit office development until they have adequate housing for the workforce. It starts and ends with the assumption – unproven and by some accounts just wrong– that greater density will lead to lower housing prices.

SB 50 seeks to encourage more density on transit corridors – but doesn’t provide any state aid for cities that will need to spend far more money than they get from developers to add transit infrastructure (and schools, open space, police, fire, affordable housing or anything else that has to be expanded when you increase the population).

But the data is really, really clear – the private market has built plenty of housing in San Francisco that’s not affordable to the workforce, and almost zero that is. And with the cost of land and materials and labor, and the demand for return on investment from the speculators who fund housing these days, there’s no way that private-sector housing will ever be affordable in San Francisco. The minute prices come down to the level that most SF workers can afford, the private developers will stop building.

Nor is there any provision for the state to repeal the Ellis Act or Costa Hawkins, which prevent cities from passing effective laws to prevent displacement.”

Buck Bagot, a native of Trenton, NJ, joined the New Left as a prep school student in 1968. He has worked as a community and labor organizer, and remains amazed that he can make a living at it. Presently he is an organizer and founding member of Occupy Bernal, a San Francisco neighborhood organization fighting foreclosures. He remains a proud member of what the FBI in 1971 deemed the "Lewd Moose Commune", named after his dear friend Peter Olney. He counts Jeff Stansbury as a person who helped keep him an active, if disappointed member, of the Left in America.