It’s well past time to bury the 'Bernie is unelectable' trope. He has a better shot than moderate Bloomberg. His campaign resonates with the growing realization of how unmoored the American capitalist system is from any sense of ethics or morality. 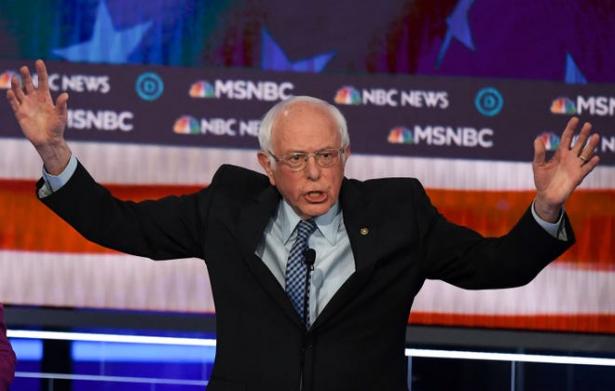 There has been a mass freak-out among the Democratic establishment as Bernie Sanders continues to surge in the polls. In two surveys released Tuesday, the Vermont Senator has opened up a double-digit lead over his closest competitors in the Democratic primary.

The desperation has caused many Democrats to set their sights on former New York City mayor Mike Bloomberg as the man who will save us all from Donald Trump. But first he’ll have to save us from Bernie Sanders. The billionaire businessman has paid a pretty penny for every point he has risen in the national polls to overtake the prior moderate savior, Joe Biden.

For most of the primary season, politicos, commentators and journalists have dismissed the Sanders candidacy at best or attacked and misrepresented it at worst with the New York Times editorial board myopically comparing Sanders to Trump and calling his policy prescriptions “overly rigid, untested and divisive.” How often do we hear it claimed with soothsayer certainty, “A Democratic Socialist will never be elected president in the United States?”

You know who else will “never” be elected president of the United States? A former reality TV star with zero governing or policy experience who attacks war heroes, the parents of war heroes, brags on tape about grabbing women by the p___y, and…well, you get my point.

This is not to say that because Donald Trump became president — after improbably winning a Republican primary praising single payer health care, attacking the Bush family, the Iraq War and challenging other previously sacred cows on the right — that anyone can become president. It’s to point out how the ground has shifted in terms of what is possible in politics. The old rules simply do not apply, so we should stop using them.

It’s true that at one point calling yourself a “Democratic socialist” would be a bridge too far for many voters, including Democrats. But that was before people began to realize how unmoored the American capitalist system is from any sense of ethics or morality. The level of economic inequality and suffering from lack of affordable health care, crushing debt, and a discriminatory and racist for-profit incarceration system in one of the world’s wealthiest countries is astonishing. People are exhausted from working non-stop trying to just survive financially in a system that dangles the carrot of financial stability or wealth always slightly out of reach except for a favored few. Nothing about this is normal and that is fundamentally Bernie Sanders’ so-called “radical” argument.

As Bernie’s new foil, Bloomberg is waving the “moderate lane” banner of electability and claiming that Bernie’s kooky notions (which are just considered normal behavior in many industrialized countries) go too far for American voters. These are the same voters who would cut off your hand if you reached for their socialist Medicare or Social Security. Still, the premise of Bloomberg as electable slipped seamlessly into the public debate. Of course, Bernie fares just as well, and sometimes better, than Bloomberg in hypothetical matchups against Trump but the electable moniker has mysteriously eluded him.

What ultimately will make the Democratic standard bearer electable is his or her ability to excite and turn out voters. This is why the most pertinent issue for Bernie’s electability argument has been his weak history attracting African American support. While he made significant inroads since 2016, much of that critical voting bloc has been locked up with Joe Biden. But that is shifting. Tuesday’s NPR/PBS NewsHour/Marist found that Bernie has narrowed that gap to just three points, and he tops Bloomberg by 12 points.

Either way, it’s hard to believe that the mayor who expanded “stop and frisk” in New York City and defended it all the way up to a month before he announced his candidacy is going to excite black voters, particularly young black voters who have made their preference for Bernie manifest. For that matter, why would any Democratic voter, regardless of their race, be excited about a candidate who lacked the imagination to grasp that being treated like a criminal just for existing would be a traumatizing experience for black and brown people?

Moreover, Bloomberg’s performance in his first Democratic primary debate last night was imperious and underwhelming. He absurdly claimed that the NDA’s women at his company signed were “consensual” and refused to agree to let them speak openly about their experiences working for his company. He stumbled through an explanation of stop-and-frisk claiming, “it got out of control,” when he was the one who had total control over it. Responding to Bernie’s contention that billionaires should not exist, Bloomberg claimed he is giving all his money away. But trying to buy your way into the presidency is not charity. He came out of the gate attacking Sanders, claiming he had no chance to beat Trump, because he’ll scare moderate voters.

But a Buzzfeed reporter surveyed moderate Democratic voters at a Biden Iowa event last month and one after another said despite their concerns about Sanders, they’d pull the lever for him if he won the nomination.

There’s no doubt that if Bernie is the nominee Republicans will continue to conflate Democratic socialism with communism and pretend that Venezuela is Sanders’ ideal society even though Bernie has said he is a Democratic Socialist in the vein of the Scandinavian countries, home to the world’s happiest people. Republicans will lie about what Bernie believes the same way they will lie about whoever becomes the Democratic nominee.

Democrats should have learned by now to not let Republicans pick their candidates for them. Remember when conventional wisdom in 2016 said Nancy Pelosi should be replaced because Republicans used her as a proxy to attack all Democrats as too liberal and out of touch? “After Democrats’ Losses Nancy Pelosi Becomes a Symbol of What Went Wrong,” a New York Times headline blared following the 2016 election.  Pelosi managed to cling to her power and Republicans made the San Francisco pol the star of many of their 2018 campaign ads against Democrats in swing districts. Yet, the Democrats took back the House with the largest midterms margin in history. Then Pelosi emerged as one of the only Democratic leaders able to effectively stand up against Trump.

Ultimately, there’s no reason to believe that voters are being motivated in any meaningful way by ideology this cycle. People who are more afraid of a single payer health care system and free college than they are of Donald Trump and his creeping authoritarianism are probably not Democratic voters or even Democratic leaning independents.

Bloomberg derided Bernie’s views as “communism” in last night’s debate, echoing Republican talking points. On the campaign trail last year, Sanders explained his vision of how Democratic socialism would work: it’s “an economy in which you have wealth being created by the private sector, but you have a fair distribution of that wealth, and you make sure the most vulnerable people in this country are doing well.”

Whatever people’s fears about Bernie’s democratic socialism, the fact remains he’s running for president, not king, of the United States. Some of his solutions are dead on and others less so. But he cannot enact any of them without the support of Congress. This means he will have to use his bully pulpit to bring the country around to his point of view if he wants to enact change. American voters are capable of grasping this this.

It’s well past time to bury the “Bernie is unelectable” trope.

[Kirsten Powers, a CNN news analyst, is a member of USA TODAY's Board of Contributors. Follow her on Twitter: @KirstenPowers]