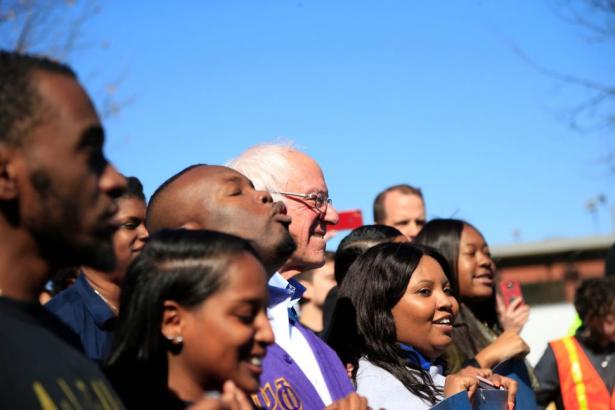 This article, written and posted on Organizing Upgrade before the South Carolina primary, has been updated to reflect Bernie Sanders' loss in that state yesterday,

Antarctica has warmed by about five degrees Fahrenheit over the last 50 years; 87% of the glaciers on its western coast have retreated. The region just recorded its warmest January on record and this month an iceberg the size of Atlanta broke off from one its fastest-retreating glaciers.

This is as vivid as evidence can get that climate change is an accelerating global emergency.

This November the country's response to this emergency is on the line. The Trump and anti-Trump camps are all but completely polarized on this issue.

Trump and his key advisers are climate change denialists. Numerous influential Republicans have called climate change a hoax. Trump has pulled the U.S. out of the Paris Agreements "leaving global climate diplomats to plot a way forward without the cooperation of the world’s largest economy." The administration has steadily rolled back previously adopted environmental protections. The fossil fuel industry "has more clout than ever under Trump." Trump's base is on-board: less than 25% of Republicans say addressing climate change should be a top priority issue and less than half even think human actions are significantly responsible for global warming.

On the Democratic side, every remaining candidate except Michael Bloomberg supports some version of a Green New Deal, and even he gets a C+ rating from Greenpeace compared to Trump's F. (Bernie gets an A+, Tom Steyer and Elizabeth Warren each get an A.) At least equally important, 78% of Democrats think fighting climate change should be a top policy priority in 2020. The semi-formal alliance between Democrats in Congress such as AOC and Senator Ed Markey with militant, often youth-led grassroots organizations has given this sentiment legislative shape and clout.

Climate change is hardly the only issue on which the Trump and anti-Trump camps are so sharply polarized. (Think race and racism, immigration, reproductive rights, the list could go on.) But it is one where the scientific consensus tells us we have already wasted too much time and decisive action in the next few years is crucial.

A Trump victory in 2020 means going even further backward: more rollback of environmental protections and more climate change denialism from the White House bully pulpit. Defeating Trump does not mean we can relax. But it would put in place an administration that is inclined (or in Bernie or Warren's case, determined) to act. Any Democratic administration would be somewhere between susceptible to and enthusiastic about pressure from grassroots partisans of a Green New Deal on the scale the world requires. Further, if concrete steps forward are made, the 25% of GOPers who currently see a need to act on climate change could be peeled away from the Trump coalition.

The Antarctic glacier from which the Atlanta-sized iceberg has just broken off is the biggest single contributor to global sea-level rise of any glacier on earth. It has the capacity to raise global sea levels by four feet. But if sea levels rise even a few inches, low-lying communities worldwide are going to start flooding. November will decide if we do something about that or not.

IT COULD BE BERNIE!!

The second key-to-2020 number is 46.8%, the percentage of the vote won by Bernie Sanders in Nevada, more than double that of his closest rival. His victory, acknowledged the New York Times, was powered by "a multiracial coalition of immigrants, college students, Latina mothers, younger Black voters, white liberals and even some moderates who embraced his idea of radical change." That victory catapulted Bernie into front-runner status, which he will maintain through Super Tuesday even in face of Biden's big victory in South Carolina. Despite that setback Nate Silver's 538 analysis still gives him a 28% chance of winning a majority of pledged delegates (more than double Biden's 11% chance) and suggests he has a good chance of getting the nomination even if he only (only!) wins a substantial plurality. Most polls show Bernie doing significantly better than Biden in the pivotal contests two days from now, but this is a volatile year and anything can happen.

Bernie's campaign still faces immense challenges. An avalanche of attacks is starting; it's time for all of us to take a new or refresher course in how to deal with red baiting. (A set of Talking Points from Organizing Upgrade is coming soon.) It's been a tough fight to get Bernie this far, but there is a kernel of truth in the conservative whine that Bernie "has been treated with kid gloves" by rival campaigns. They believed he couldn't win and didn't want to alienate his supporters by going after him with all rhetorical guns blazing. That period is over.

The Bernie camp must and will fight back. But this is not the time to go into a defensive crouch or demonize everyone who currently opposes or expresses doubts about Bernie winning the nomination. A large percentage of those who now hold those views (including elected officials as well as "ordinary" voters) are motivated mainly by fear of Donald Trump winning re-election and have been swayed by the endlessly propounded "conventional wisdom" that Bernie is "too radical" to do the job.

But Bernie being ahead opens a huge opportunity to persuade important new constituencies that the "conventional wisdom" is dead wrong. That is accomplished by insisting that we share their sense of urgency about beating Trump, and that we will work hard to build the broadest possible unity to make it happen.

Bernie himself is taking that tack. He knows that he cannot win the nomination, much less the presidency, if he only gets votes from people who agree with his full program. Rather, the route to victory requires both animating his base and convincing millions who disagree with him on many issues that their shared commitment to inclusive democracy is more important, and that he will defend their rights and interests far better than Donald Trump. And Bernie consistently stresses the need for broad anti-Trump unity while making the case that that he is the best candidate to beat Trump. Super Tuesday will be the next big test of whether this approach can widen his base.

The underlying strategic point here goes beyond this election. U.S. society is huge and complex; millions see all kinds of things in different ways and are rarely models of political consistency. The radical left cannot set the national agenda if it is supported only by those who back our views 100%. We need to become the leadership of a coalition that goes beyond our own ranks. One of the most exciting things about the way this primary season is unfolding is that it may give us a chance to learn how to do this on a scale few imagined possible even a year ago.

We not only have a lot to learn, it is urgent that we build our muscle. The most telling single indicator of where we stand relative to the far right and establishment "center-left" in terms of on-the-ground strength is that trade union density today stands at 10.3%. This is less than one third of labor's strength in the late 1940s/early 50s and the lowest figure since the early 1930s.

There is no comparable single number that indicates for other battlefronts and forms of organization how far we have to go. But even a cursory look at the landscape shows that resurgent movements for racial justice still lack the deep roots and organizational breadth of the 1960s upsurge; the peace movement and degree of internationalism in  progressive circles generally come nowhere matching today's threats of war and aggression; and coordination across different movement "silos" is only slowly breaking down. Even concerning electoral action, where the gains by progressive are most visible, we still lack a unified vehicle which all or even most progressives use to coordinate our efforts.

No matter who wins the White House, the impact of these weaknesses will come crashing in on us within hours of the inauguration. That's true even in our "best case scenario": Bernie (or what now seems like a very long shot, Warren) wins the White House and the Democrats regain control of the Senate and expand their majority in the House. There still will not be a majority for a far-reaching progressive program in Congress - and conservatives retain control of the Supreme Court. That means there is no way to implement deep structural reforms (much less the more radical changes sought by the far left) via the machinery of government alone.

What does and doesn’t get done will largely be determined by pressure from the "outside." The out-for-vengeance Trumpist right will deploy its billions of dollars, its well-oiled disinformation machine, its army of lobbyists, and its phalanx of haters to block every attempted step forward. The wing of the elite that opposed Trump will mobilize its financial and media resources and its experience in "working the system" to keep the most far-reaching initiatives pushed by the left within what they consider safe bounds.

Coming off a victory over Trump and the leaps forward in numbers and sophistication social justice groups have made since 2016, our side will have lots of people power to throw into the fray. But we are likely to get a sharp reminder of the difference between winning an election and having a sufficiently organized and consolidated base, level of institutional strength and unity across sectoral divides to turn our agenda into facts on the ground.

Going all-out in the 2020 electoral fight, and especially focusing our efforts on key sections of the multiracial working class, expands our connections with millions who are discontent and open to hearing about a different path. It gives us a chance to bring large numbers of new people into our political orbit and expand the ranks of progressive and left organizations.

But we are in a long-term fight for political power and the results on election day will be only one test, if a decisive one, of how much we have accomplished. Another will come in the months and years immediately following November 2020.  Can we double and then triple union density and make comparable gains in building organizations focused on racial justice, gender justice, environmental justice and peace. If ever there was a "both/and" moment, this is it. Only if we expand our muscle on the ground by orders of magnitude in addition to building a powerful electoral machine can we gain the power we need to make the changes we want.

For starters, keeping Antarctica from melting away.

Max Elbaum is the author of Revolution in the Air: Sixties Radicals Turn to Lenin, Mao and Che (Verso, third edition, 2018), and an editor of Organizing Upgrade.