The world economy, to the degree it still works at all, serves to benefit the few at the expense of the many. The author of the book under review does an economic deep dive into ways that can reverse that antidemocratic equation. 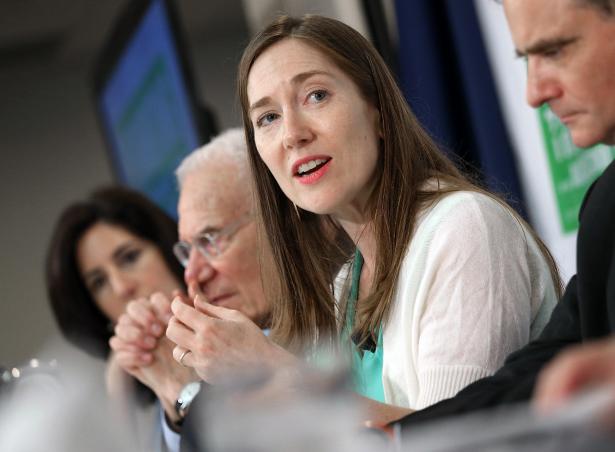 In a new book, the economist Heather Boushey illustrates how many in her profession are returning to their discipline's roots by studying the underlying factors of economic outcomes., Photograph by Win McNamee / Getty // The New Yorker

Our national discussion on inequality tends to focus on the ethical and political concerns about the depth of the disparities in wealth and income we are willing to tolerate in a democratic society.

Less attention is paid to the economic cost of inequality. Economist Heather Boushey helps fill this void with her recent book, "Unbound: How Inequality Constricts Our Economy and What We Can Do About it"

Boushey's work certainly carries an undercurrent of moral outrage about the vast inequality that has developed over the past four decades.But beyond its moral underpinning, the book's refreshing contribution to this debate is its systematic debunking of the theory of mainstream economists whose work accounts for the public policies and economic practices at the root our scandalous inequality, now at Great Depression levels.

The book shows how over the last half century, the free-market prescriptions of mainstream economists have failed to deliver the broad-based social benefits for our society.

Boushey reviews a vast body of literature of a new generation of progressive economists that documents how inequality undermines our economy.

Along the way, Boushey provides a comprehensive public policy prescription for addressing our social divide. Her analysis is particularly welcome during a presidential election year when voters are dealing with weighty issues like universal health care, tax reform and the structural employment crisis made ever more evident by the coronavirus pandemic.

Boushey argues that years of economic inequality have stifled productivity by limiting the educational opportunities of workers, discouraging investment, fueling discrimination and starving the public sector. Today's slow-growth economy and periodic financial crises are manifestations of the long-term failure of mainstream economics.

Coming out the Great Depression, Boushey explains, the public policy community coalesced around using the Gross Domestic Product as the basic measurement of the of the health of the economy.While adding up the goods and services of the economy, the GDP doesn't not adequately reflect the well being of ordinary people.

The End of Shared Prosperity

President John F. Kennedy's notion of "a rising tide lifts all boats" captured the philosophical underpinning of the economic view that prevailed for decades. The feeling was that economic growth benefits everyone; a certain amount of inequality was OK as long as long as the standard of living of everyone improved.

But this consensus began to unravel in the 1970s with the breakdown of the shared (though not fully inclusive) prosperity following World War II. The income growth of middle class (particularly white) American families stopped mirroring the rise in productivity as the economic elite and corporations consumed a greater proportion of the economic pie.

Boushey identifies the central assumptions of mainstream economists and shows how their theory has diverged from reality. The executive director and chief economist at the Washington Center for Equitable Growth, Boushey isn't engaging in an abstract academic exercise. Her policy recommendations point to a way out of our country's economic malaise and an end to the frustrated living standards of the vast majority of Americans.

Standard economic theory argues that market competition will drive out firms that favor one group over another for any reason other than their productivity. This assumes that the free market rewards the most talented and hard-working people. But this scenario doesn't play out in the real world.

Numerous studies show that economic inequality hinders productivity by limiting educational opportunity and workforce development. The careers and job prospects of our children are profoundly shaped by such factors as health and nutrition, household income, quality childcare, public assistance programs, community and faith-based support, and the quality of their primary and secondary education.

The mainstream market model plays down the need for the state to use its power to use taxes to limit inequality and support progressive pubic policies.For instance, the "Laffer Curve," which was popularized in the 1970s, argues that lowering taxes can spur economic growth while making up for lost revenue.

But, as Boushey documents in "Unbound," tax windfalls for the wealthy and corporations have failed to stimulate economic growth as promised while exacerbating inequality.

The federal government has deferred budget cuts by increasing its debt load. But by 2022, the federal deficit is projected to be $1 trillion, or 4.5 percent of the GDP, the greatest peacetime deficit ever. States generally must balance their budgets, so they slash spending when tax cuts don't lead to more revenue.

Insufficient revenue has deprived the federal government and state governments of funding for investment in transportation, infrastructure, public health and education.Decades ago, California's public university system was tuition free, but the state now only covers 40 percent of the budget. Spending per student dropped from $23,000 in 2000 to $12,000 in 2012.

The prevailing model of mainstream economics assumes our economy is governed by perfect competition, which is supposed guarantee fair prices. But in reality, our economy is characterized by market concentration, which distorts prices, contributes to economic inequality, slows economic growth, hurts consumers and hinders innovation.

So, monopoly power and economic concentration gives firms greater power over the marketplaces where they sell their goods and services. This clout also gives them great control over labor markets. It allows firms to hold down wages and other labor costs (through smashing unions, shifting the cost of health-care and other benefits to workers, and contracting out work), thereby fueling inequality.

The financial squeeze on ordinary Americans caused by inequality restricts consumer spending, which debilitates and distorts the overall economy, according to Boushey.

As pointed out by Boushey, demand suffers when most income goes to a small number of people. In a country where consumption accounts for nearly 70 percent of our economic growth, a strong demand for goods depends upon a strong middle class.

As ordinary Americans become more economically squeezed, they are taking on more and more debt. Middle class families have borrowed heavily to pay for their homes and their children's education, leaving them less funds to purchase consumer goods.

Economists Joel Slemrod and Matthew Shapiro at the University of Michigan  found that many low-income workers used their 2001 and 2008 tax rebates in 2001 and 2008 to pay down debt.

Increasing inequality resulted in an annual transfer of a $1.1 trillion in 2007 dollars to the very rich from 1979 to 2007. Economist Alan Kruger, chair of the Council of Economic Advisers during the Obama administration, found that if that inequality hadn't occurred, aggregate consumption would have been up 5 percent higher each year.  That translated into an annual loss of $480 billion (in 2008 dollars).

A rise in inequality means corporations have enjoyed a substantial increase in savings. But little evidence exists that they are using their super profits to invest heavily in the economy. Instead, many corporations are using the additional profits to benefit shareholders, boost executive compensation and park capital in tax havens. In this way, inequality has a distorting effect on the economy.

Boushey calls for bold action to address the economic and social challenges posed by inequality. To begin with, she says, the government needs to disaggregate growth data to provide a measurement on economic distribution. Such a "distributional national income account" should be given equal weight as figures on the GDP, inflation, trade deficit, and the unemployment rate.  Shining a public spotlight on the distribution of wealth and income would give a clearer picture of our living standards of the people and what public policies should be adopted to make improvements.

""Let's take seriously the binding power of inequality and work to release our economy-and our society-from its grip, while retaining the vibrancy of a market economy so that we have an American economy that works for the many, not just the luck few," she says.

Book Author Heather Boushey is the president,  CEO and co-founder of the Washington Center for Equitable Growth, which was launched in 2013. The center's purpose is described "founded to accelerate cutting-edge analysis into whether and how structural changes in the U.S. economy, particularly related to economic inequality, affect economic growth and stability." Boushey is one of the nation's most influential voices on economic policy and a leading economist who focuses on the intersection between economic inequality, growth, and public policy.

[Essayist Gregory Heires served for many years as an editor of the Public Employee Press, the newspaper of AFSCME DC 37 in New York City. He is also a labor moderator on Portside.]