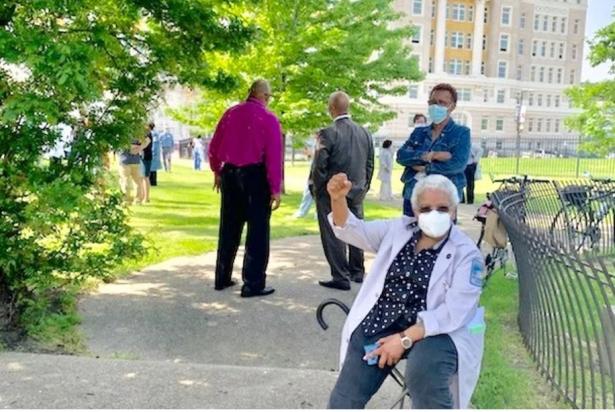 Dr. Linda Murray, today an adjunct assistant professor at the University of Illinois School of Public Health, was an internist at a clinic in Cabrini-Green during the deadly 1995 Chicago heat wave, and says the structural racism responsible for the deaths, of 739 Chicagoans 25 years ago has again played out during the COVID-19 pandemic and police brutality reckoning. Here, she participates in a June 4 demonstration by "White Coats for Black Lives," at old Cook County Hospital.

Dr. Linda Murray sighs. The 71-year-old former chief medical officer for the Cook County Department of Public Health is quiet for a moment, traveling back in time 25 years.

She was an internist working at the Winfield Moody Health Center in Cabrini-Green when Chicago was hit by one of the deadliest heat waves in U.S. history.

As temperatures shot up to a frightening 106 degrees on July 13, 1995 — and remained stuck in high double digits for five days — bodies began to pile up at the office of Cook County Medical Examiner, Dr. Edmund Donoghue. By the time it was over, some 739 poor and elderly Chicagoans — mostly people of color — had died.

“In a heat wave, you could have one day or maybe two days of extreme heat, but when you get to the fourth and fifth day, then you really begin to see people falling out, becoming ill and dying,” said Murray, who retired in 2014 after 17 years as

“In a heat wave, you could have one day or maybe two days of extreme heat, but when you get to the fourth and fifth day, then you really begin to see people falling out, becoming ill and dying,” said Murray, who retired in 2014 after 17 years as chief medical officer.

“That we were in the midst of an unusual tragedy became obvious to everyone, when the refrigerated trucks started lining up outside the medical examiner’s office — everyone, except Mayor [Richard M.] Daley, who famously dismissed the inordinate deaths with, ‘It’s hot.’”

Seeing the barrage of bodies coming in, Donoghue, under whom Murray studied, sounded the alarm. Daley resisted acknowledging the crisis.

Myriad studies — including a 2002 book by Eric Klinenberg, “Heat Wave: A Social Autopsy of Disaster in Chicago,” and the 2018 documentary “COOKED: Survival By Zip Code” — blamed the deaths of so many elderly in South and West side Zip codes on the city’s failure to address poverty and disinvestment in those neighborhoods. Bodies were found decomposing in homes. 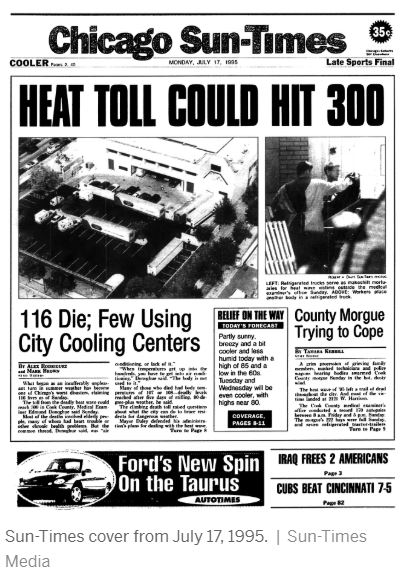 “One thing I remember about Dr. Donoghue was that he always stressed he was an advocate for the dead,” Murray said. “He said, ‘Linda, my patients are the dead, and if I don’t speak for them, nobody will.’ And so he really stood up to the mayor. And he was proven right.”

Murray — today a governing council speaker with the American Public Health Association and an adjunct assistant professor at the University of Illinois School of Public Health teaching would-be doctors about the conundrum of health inequity — was chatting before she headlined a conference marking the 25th anniversary of that heat wave.

“The Summer of Extremes: Racism, Health Inequity and Heat,” brought medical professionals and community leaders together with journalists to dissect its lessons, along with similarities found in the COVID-19 pandemic and a growing national call to address structural racism as a public health crisis. I moderated the three-day event.

“COVID-19 is the global pandemic that those of us in public health knew was coming, and yet our country has not been prepared. It should be obvious to anyone now, that we’ve allowed our public health infrastructure to decay,” Murray said.

“And this challenge has exposed all the cracks and deficits in American society, beginning with structural racism, the thing that ties these two events together. When we say ‘structural racism,’ it means something in people’s everyday life, in Black lives, and more generally, in the lives of people of color,” said Murray, who retired in 2018, after 40 years of clinical practice, a career she spent sounding the alarm on race inequities.

“We’re not considered valuable. We’re not considered human. That’s the only way to explain these inequities,” maintained Murray, board chair of the National Collaborative for Health Equity and a board member of the Chicago Health and Medicine Policy Research Group, as well as many other local and national medical organizations and institutions.

Nationally, racial disparities in COVID-19 mortality were first highlighted by officials in Illinois and Chicago. Statistics reported last week by the Centers for Disease Control and Prevention showed Blacks and Native Americans dying from the disease at a rate five times that of whites; and Latinos, at a rate four times higher.

The ‘95 heat wave changed how the city responds to extreme temperatures, leading to more stringent heat emergency planning nationwide. But advocates question whether cities are adequately prepared for this summer’s collision of heat, pandemic and revolution.

“This is what I’m concerned about. My great-great-grandmother told me stories as a child about lynchings in the South, about whites killing Blacks. And I am a child of the ’60s,” said Murray, who is still advocating against racial inequities, most recently participating in a demonstration by “White Coats for Black Lives,” held June 4 at the old county hospital.

Organized by that national group established in 2014, simultaneous demonstrations were held by medical professionals nationwide in support of the Black Lives Matter movement.

“I was in Cleveland, Ohio, when we had the rebellions in 1966. I was here in Chicago when the rebellions occurred after Dr. Martin Luther King’s assassination,” Murray said.

“And for the past several weeks, in the wake of the killing of George Floyd under the knee of a white police officer, my 18-year-old granddaughter has been out on the streets fighting over the same thing that her grandmother fought for. So my question for America is, ‘When are we going to fundamentally change how this country operates?’ ”