We must see real estate market for what it truly is: an institution rooted in settler colonialism that allows land (and the housing that sits atop it) to be distributed and controlled by those who have enough money for their preferences to matter. 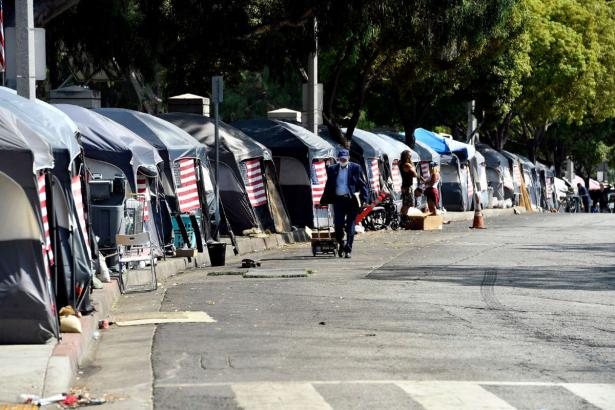 In many major metropolitan areas across the United States, there are far more vacant homes than people experiencing homelessness.

This is true in New York City, it’s true in the Bay Area, and as our new report shows, it’s true in Los Angeles. Here, there are 93,000 vacant homes compared to just over 41,000 unhoused people.

Our report, the product of a collaboration between UCLA School of Law and the community-based nonprofits Strategic Actions for a Just Economy and Alliance of Californians for Community Empowerment, is perhaps the most detailed look yet at the characteristics of residential vacancies situated in the broader speculative housing market in any city in the United States.

With the news that at least 959 unhoused people have already died on the streets of Los Angeles in 2020, it’s never been more critically urgent to understand how cities like LA end up with a surplus of luxury homes existing alongside tens of thousands of desperately poor families without roofs over their heads.

Our findings strongly suggest that we cannot rely on the operation of the market to fix our problems, whether it be housing or any other social need, because the capitalist market is the problem.

While those committed to pushing pro-market housing policies tend to argue that there will always be some vacancy as homes sit empty between residents, our numbers show that this cannot explain the vacancy LA is experiencing.

We found that out of 93,000 total vacant homes, over 46,000 units are held in a state of “non-market” vacancy, meaning they’re not just in between residents waiting for someone to lease or buy them. Of these, over 12,000 homes are categorized by the census as “for seasonal, recreational, or occasional use” — in other words, vacation properties for the rich that mostly sit empty.

Importantly, vacancy disproportionately occurs at the top of the market, with our analysis showing a very straightforward relationship: the higher a unit’s rent, the more likely it is to be vacant.

In Los Angeles there are 93,000 vacant homes compared to just over 41,000 unhoused people.

In LA, like other booming cities, what’s getting built is in this top end of the market — the incredibly expensive homes that most Angelenos cannot afford. For example, 97 percent of the units currently under construction in the city’s downtown area fall under what CoStar categorizes as the “4 & 5 star” class, with average rents over $2,800 per month. According to CoStar’s calculations, these types of units have a massively high vacancy rate of over 16 percent, compared to a rate of under 5 percent for units not under this super-luxury designation.

A 2019 report by the city’s Housing Department comes to similar conclusions. The authors find a “dramatic difference in vacancy rates” between high-end and mid- or low-end units, and that while thousands of units are being added to the supply of high-end housing, the stock of more moderately priced units is actually falling. The city’s “hottest housing markets” have the highest vacancy rates, with neighborhoods like Hollywood and Venice potentially seeing rates as high as 15 percent. The data suggest “prolonged periods of housing units sitting idle in these neighborhoods,” which cannot be explained by the time it takes to lease-up newly constructed units.

Another important trend we document is the increasing financialization of urban real estate. According to data from the LA County Assessor, 67 percent of all residential units in the city are owned by corporate entities and other nonindividual investors, which is 2.5 times the national average. Corporate entities also own 76 percent of all vacant lots in the city not owned by public entities, accounting for 22 square miles of vacant land.

More than ever, owners in LA see housing and land as a speculative investment, an asset to profit off of in the future instead of a home to house someone now. And the consequences for ordinary people are disastrous.

Neoliberal housing advocates — like “YIMBYs” (Yes In My Backyard) and market urbanists that tend to dominate mainstream accounts of the crisis — suggest that we can build our way out of this crisis of tenancy, of people chronically not being able to access shelter. But if we look critically at what is getting built, we see that it will never provide relief for poor, or even middle-class Angeleno renters.

We cannot rely on the operation of the market to fix our problems because the capitalist market is the problem.

Our data suggest the benefits of producing housing at the top will not “trickle down” to the masses. With so many units sitting vacant, the “filtering” theorized by these advocates — essentially the idea that homes at the bottom will become available and more affordable as wealthier people move into newer housing — fails to materialize.

Even if we assume that the pro-market boosters and their economic theories are right about the trickle-down effects of increasing market-rate supply, the supposed benefits will never come close to matching the scale of what is needed. Take downtown LA again as an example, which has been pointed to by local real estate journalist Steven Sharp as a model for the entire region due to its building boom. But Sharp’s own numbers reveal how weak his argument is: The coveted prize from all this building is that rents in the neighborhood have “remained flat,” while elsewhere they’ve gone up. Similarly, an article from Curbed LA earlier this year admits that despite the “incredible amount of units” built in this neighborhood over the past years, rents are just down 1 percent.

With over 600,000 households in LA spending over 90 percent of their income on rent, the poor don’t have time to wait for new construction to trickle down to lower average rents. The most vulnerable tenants need to be sheltered from the capriciousness of the market, not subjected to it. The idea that building super-luxury homes that poor people cannot afford is actually good for them is a fiction that must be dispensed with as soon as possible.

Our report ends by calling for a strong vacancy tax, among other policies the City of LA could pursue, and clarifies the legal framework that would allow cities in California to do this despite restrictions on taxing property in the state’s constitution. A vacancy tax would both incentivize owners to fill their units and raise revenue that could be put to use for social housing. Essentially, a vacancy tax would make it more unaffordable for owners to use housing as a speculative investment.

But we need to go much further, something that has been made especially clear as the COVID-19 pandemic has combined with the racialized precarity of the capitalist real estate market to create what is possibly the greatest ongoing wave of mass evictions and homelessness our country has ever seen.

We must see the real estate market for what it truly is: an institution rooted in settler colonialism that allows land (and the housing that sits atop it) to be distributed and controlled by those who have enough money for their preferences to matter. That vacant homes coexist alongside people sleeping on the street is a disturbing truth in many of our cities across the country. It is imperative to not only reflect on this as coincidence, but to understand both vacancy and houselessness as co-produced by the larger system.

Alex Ferrer is a housing researcher and is currently studying urban planning at the University of California, Los Angeles. His work supports tenant organizing and considers how failing to house people is an integral aspect of contemporary urbanization.

Terra Graziani is a researcher and organizer based in Los Angeles, California. She founded the LA chapter of the Anti-Eviction Mapping Project and is a researcher with the University of California Los Angeles’s (UCLA) Institute on Inequality and Democracy and UCLA’s Center on Critical Internet Inquiry. She received her master’s in urban planning at UCLA. Her work focuses on the intersection of police, property and personhood.

Jacob Woocher is pursuing a joint degree in law and urban planning at the University of California Los Angeles. He organizes with the Los Angeles Tenants Union. Follow him on Twitter: @jacobwooch.

We got so close to reaching our October fundraising goal that we wanted to make one last appeal. Will you chip in a few bucks to help us out?

A donation of any amount will go a long way right now.

If you can go a little further and want to help strengthen Truthout so we’re less dependent on these fundraisers, please consider starting a small monthly donation.

Please, do what you can.